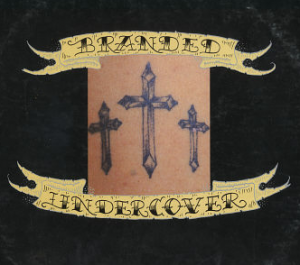 “The kingdom of heaven is like treasure hidden in a field. When a man found it, he hid it again, and then in his joy went and sold all he had and bought that field.” —Matthew 13:44

As a Lawrence, Kansas, resident, I am proud to live in a place where record stores are not extinct. The MP3 meteor that impacted the music industry over a decade ago left behind the skeletons of stores that once thundered with music—stores that bridged the gap between my childhood love of dinosaurs and music that likewise shook the Earth.

Dinosaurs live on in Lawrence in the form of two record stores: Love Garden and Kief’s Downtown. I visited Love Garden a few weeks ago and found myself playing the part of a musical paleontologist of sorts. In the alternative record section, I unearthed an unexpected fossil in the form of Undercover’s Branded album.

As I flipped through the used records, I saw the cover image—three crosses tattooed on flesh—and could not believe my eyes. Released in 1986, Branded was Undercover’s fourth album, and a radical departure from the band’s Christian pogo-punk/new wave roots. As musical species go, Branded was a decidedly gothic creature that adapted to life in the dark, seeing hope where others only saw blackness.

I considered buying the album, but thought better of it. I already owned it on CD, and I was trying to curb my compulsive record buying.

Realizing my foolishness, I returned to the store a week later and bought Branded for six dollars. Had I bought it for the same price in 1986, I would have needed six weeks’ worth of allowance to pay for it.

I discovered Undercover in 1990 when I was eleven. My youth pastor Bruce maintained a cassette library for those in my church who were inclined to rock music. I checked out a copy of the band’s fifth album, 1990’s Balance of Power, and returned it, only to check it out and return it repeatedly. Lacking the musical knowledge to describe the album’s menacing minor keys, I told my friend Joe the album had “lots of flats and sharps in it.” I thought this explained things perfectly.

This, of course, happened in a prehistoric age, before the Internet turned information into a household commodity that flowed like tap water. When I discovered this cassette creature with chrome guts in Bruce’s library, I did so in a vacuum. I had no idea who Undercover was.

I surveyed the shadowy picture of the band on the inside of the cassette jacket, and found more questions than answers. The guitarist was named Gym, the vocalist Sim, and the bassist/keyboardist, Ojo. Then there was Gary, the drummer, who was apparently absent the day his bandmates picked out their mysterious monikers.

Who were these people?

In my search for knowledge about Undercover, I knew MTV and VH1 would offer no revelations. Neither of those channels played underground Christian artists, and both were banned at my house. Our TV was guarded by my father—a dinosaur-loving pastor. Like the lizards he loved so much, he roamed and grazed freely in the living room, clutching the remote controls with his claws and keeping his brood from beholding any untoward pop culture carnage.

A few years after discovering Balance of Power, an older member of my youth group named William gave me a cassette that featured a different Undercover album on each side—1984’s Boys and Girls, Renounce the World was on Side A, and Branded was on Side B.

In Branded, I heard the soundtrack to the agony of Gethsemane. Like L. S. U.’s Shaded Pain, which came out the same year, it was spiritual desperation set to music, released in a market where desperation was decidedly less marketable than the optimistic pop of Amy Grant or Michael W. Smith.

A few years later, I discovered additional evidence of Undercover’s existence at a Christian bookstore in the form of the band’s live album, 3-28-87. It was documented proof that a cloud of witnesses had seen the mysterious members of Undercover making music in the flesh.

In those days, I traded most of my earnings for albums at Christian bookstores. Mom and Dad said I spent too much money on music, but music electrified my life. Paying my own personal electricity bill seemed like a matter of utility to me.

I still spend too much on music. While I mostly invest in digital downloads, I am trying to visit Love Garden and Kief’s Downtown more often, and not simply because record stores are an endangered species. Record stores, like churches, offer visitors a chance to discover a living past that has the potential to illuminate one’s present and future with inextinguishable light.

I once overheard the owner of Love Garden describe records as “functional antiques.” In a record like Branded, a relic of the past has the potential to spin and crackle under a needle in the present, too.

In this sense, records remind me of the coelacanth—a fish thought to be extinct since the Late Cretaceous epoch until a live specimen was discovered in 1938. In the coelacanth, a creature often described as a living fossil, we came to know a previously unknowable inhabitant of Earth’s prehistoric waters.

While the Internet eventually made the unknowable knowable where Undercover was concerned, finding Branded on vinyl was like discovering a living fossil and finding the mystery of Undercover intact as I held evidence of the band’s existence in my hands.

We are creatures who require more than mere proof—we require an encounter.

I follow Ojo on Twitter now. His real name is Joseph Taylor. He who was once unknowable is now knowable in 140-character bursts. He who only existed incorporeally in my imagination became flesh and blood, and dwells among the people I follow online.

Chad Thomas Johnston is a writer, blogger, artist, singer-songwriter, and publicist who resides in Lawrence, Kansas with his wife Rebekah, their daughter Evangeline, and five felines. He is represented by Seattle-based literary agent Jenée Arthur, who is currently shopping his manuscript, “The Stained-Glass Kaleidoscope: Essays at Play in the Churchyard of the Mind,” to publishing houses. Visit him www.chadthomasjohnston.com and his Twitter @Saint_Upid.