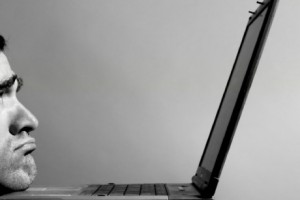 In Part One of this post, aptly subtitled “Resistance” by our new Good Letters editor, Cathy Warner (who deserves a shout-out for the various transitions she has navigated), I explored the practical side of my abstention from all forms of social media except email.

While acknowledging the theoretical cost on both personal and professional fronts of my anti-social stance—all those missed connections and lost opportunities, fewer Shares, Tweets, Likes and whatnot compared to other GL bloggers—I had yet to see my way to the time and self-promotion required for a more sizeable online footprint.

But as hinted at by my closing question, there were rocks still to turn over, and uncomfortably so for what would be found lurking in the dirt:

“Or might there be another reason behind my relative reclusion, an underlying one that has more to do with things spiritual than practical, with the very faith-based reasons for which this blog exists?”

“Yes,” I replied, leaving myself on the hook to explain why here.

Hence the subtitle, “Repentance,” one I could come up with all too easily myself. For though I enjoy the alliterative and assonant echoes of “Resistance,” the demands for an explanation I do not.

Simply put, four years and seventy-six posts since this blogging gig started, I am still something of a closet Christian around friends and colleagues who don’t know this side of me, or a mealy-mouthed one around those who do.

That’s roughly 76,000 words, a book’s worth and counting, but the list of people in my life who don’t know that I moonlight here at Good Letters is a long one.

Say what I want about the further demands that Facebook, for example, would make on my time; how about the demands it would make on my faith, the exposure of which would be magnified socially and professionally were I to post my blogging there?

I know there are ways to control such exposure and limit it to one’s designated friends, but therein lies the rub: My very use of words like control and limit.

These aren’t the words Jesus used when exhorting his disciples not to hide their lamps under bushels, but to shine as openly as a city on a hill that cannot be hid.

So what’s my problem? Why so shy in this respect, not with strangers but with people I know?

These people have my phone number, but not my turbid testimony to a higher sense of being saved and called with a holy calling as proclaimed by St. Paul. These friends have my address, but little knowledge of where I truly live.

A proper answer to that question might require another 76,000 words on my part—one that perhaps goes back all the way to the birth canal and my marathon reluctance to emerge from the comfortable confines of that dark chamber into the light.

But a sufficient answer might require just two words for this present purpose in the form of a question: Who cares?

Who cares why I’ve been too embarrassed or scared or proud or vain or conditioned by popularity to be as open with friends and colleagues about my spiritual beliefs as I have been, say, about my political or literary ones? Would an accounting of the causes in any way mitigate the effects—or compensate for the lack of them, to be more exact?

Yes, actions speak louder than words, and I would like to think that mine in general (not always in particular) tend to speak well (but not necessarily great) for the fruits of the Spirit.

But given that my work as a writer is at times a kind of cross-training routine of poetry, screenwriting, and prose, I am someone who duly deems words an action in their own right.

Two disclaimers to be made before I go any further: First, my other reasons for abstention from social media as described in my previous post still stand. Second, I’m not a spiritual shut-in keeping the fact that I’m Christian from all my peers.

Many or perhaps most do know; but often more as a result, I imagine, of their inference or ascertainment than my forthrightness or transparency.

Certainly reticence and opacity are the easier paths when you work as I do in primetime television, an industry in which, generally speaking, a C-word far more taboo than the one that comes to mind is Christ.

During my stint at Good Letters I have posted some things I might not have if a bigger online footprint with Facebook, Twitter, Linked-In, and the like had put me more at risk of exposure in the workplace on this or that show.

At other times, I’ve posted things almost teasing this risk just to see if I might be outed for my faith by peers who happened to come across the blog in their online diversions.

But there’s a point at which repentance itself can be cause to repent, and I seem to be nearing that point. Because, really, the same two words again apply: Who cares? So what? Give thanks. Move on. Live and let live, let go and let God. 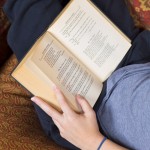 August 20, 2012 Rediscovering Rilke
Recent Comments
12 Comments | Leave a Comment
""It doesn’t matter when you start the Sinatra Christmas playlist or put up your tree. ..."
C_Alan_Nault How to Win the War on ..."
"Yup."
Max Marvel Finding My Inner Calamity Jane
"I an confused by the use of "aural" here: "In The Gutenberg Galaxy, he explained ..."
William G II The Gutenberg Imagination
"My friend is looking for a Pepper Smith he served in the army with, was ..."
Christine Budnack The Love Song of Pepper Smith
Browse Our Archives
get the latest from
Catholic
Sign up for our newsletter
POPULAR AT PATHEOS Catholic
1