A Tale of Two Rivers 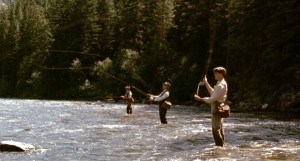 “In our family, there was no clear line between religion and fly fishing. We lived at the junction of great trout rivers in western Montana, and our father was a Presbyterian minister and a fly fisherman who tied his own flies and taught others…”

Whether you’re a moviegoer or a reader, I suspect you’ll recognize that passage. It opens A River Runs Through It, and Robert Redford reads it with appropriate reverence in the beloved big-screen adaptation he directed.

It sets the stage for a story about a family living between the rivers of religion and art. And although I’ve always been a city boy, this story set in the great outdoors, has felt like a gift meant for me. In fact, the film opened on October 9, 1992 — my twenty-second birthday.

Last week, I sat my forty-two-year-old self down to watch this twenty-year-old picture once again, and it moved through me more powerfully than ever. Basking in Phillipe Rousselot’s patient, observant, Oscar-winning cinematography, I experienced a mysterious solace.

I was already familiar with Norman Maclean’s semi-autobiographical story. One of my English professors had celebrated its exemplary prose, and I follow his example in my own fiction workshops, holding up Maclean’s work as storytelling worthy of study.

But the film, which expands this story of the pastor and his sons, moves me even more. The story, told with such patience that it feels spacious compared to almost all popular American movies since then, explores the central tensions of my own life.

The Maclean family resembles mine — a father who teaches the scriptures, a mother who serves the family with selfless generosity, and two boys who pursue artistic aspirations on different paths. (The Maclean boys part ways over literature and fishing; I chose literature, my brother chose music.)

While Paul, the youngest Maclean brother, becomes a masterful fisherman, he also becomes dangerously irresponsible with alcohol, women, and money. I’m grateful that my brother and I have, by God’s grace, never fallen into Paul’s relentless rebelliousness. We’re both more like Norman, the older brother, deeply rooted in the teachings of our family, our school, and the Baptist church of our childhood.

The fishing scenes in Redford’s film, which are as graceful as Maclean’s prose, always prompt me to think about my own writing life. We watch these fishermen tie their own flies—an art both practical and aesthetically beautiful. Then we watch them cast their gleaming lines into the wind, watch the lines settle into the water, watch this mysterious ritual draw up mysteries from the deep until revelations break the surface and dance in the sun.

While I still feel like an apprentice at prose, I’ve come to value the rituals of discipline, just as the Maclean boys practice the art of casting. Those who aspire to be writers but have no patience for the study of grammar and punctuation remind me of those who vow to follow Jesus but have no respect for religious tradition.

I fling a line of words out over mysterious currents, hoping to catch something big and beautiful. Having practiced for many thousands of hours, I find that the fundamentals come naturally now. I can improvise and make new discoveries, learn what more is possible. Sometimes, I catch something. And I lose myself, swept away by light and motion, until I return with a blessing and deep gratitude.

But another aspect of the film intrigues me this time. Maclean describes the Presbyterian minister as emerging from a church service “anxious to be on the hills where he could restore his soul and be filled again to overflowing.”

This rings true. How many times have I looked out the church window and longed to be at the ocean’s edge, or hiking to a peak? As a child, I endured sermons by drawing pictures of the natural world. Growing up, I’ve often been troubled by the great divide between the rivers of art and religion in my life.

Why have I experienced more profound revelations of God’s presence in art than in Sunday morning worship?

I’m not criticizing former churches. On the contrary, I’m grateful for the teaching I’ve received in pews of my childhood Baptist church and the Presbyterian church I called home for almost two decades. There I’ve learned the fundamentals of what it means to be the body of Christ.

But 2012 has been a season of unprecedented hardship for my wife and me. I have struggled in my faith, work, and art. And both of us have felt drawn into a new and unfamiliar sanctuary—a space alive with beauty and mystery, where the line between religion and art is all but impossible to discern.

In our new Sunday destination, the congregation gathers in reverent anticipation rather than social chatter, as if something extraordinary is about to occur. Currents of incense wind through the air. We observe more than moments of silence, we sink into long pauses, listening for the words of God that the Reverend Maclean insists we might hear beneath the rocks of the riverbed. We kneel, rise, and turn as if in a ceremonial dance. We give voice to scriptures and prayers so beautiful that they unite believers across continents and centuries.

Afterward, rather than commenting on the pastor’s “performance,” or catching up on the week’s most dramatic developments, I emerge nearly speechless (a condition which is, my friends will tell you, quite uncharacteristic). I carry a sense of sacred mystery similar to what I feel after my own Montana excursions. I’ve been blessed with more than a message; I’ve engaged with all of my senses. Now the ears of my ears are awake . . . the eyes of my eyes are open.

I don’t know how long we’ll worship in this sanctuary. But for now, I’m grateful. This art-full worship restores my soul. I am caught up wholly in the holy. And in those moments, all things merge into one. And, yes, a river runs through it.