The Evidence of Things Not Seen

The Evidence of Things Not Seen October 3, 2012 Vic Sizemore 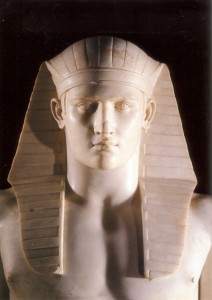 Since I’ve been blogging here at Good Letters I have been contacted by several friends who knew me back when I was a Baptist. My friend Heidi asked, “Are you a universalist now?” Cliff wondered if I was, “denying or seriously doubting Jesus’ claim to be God.” Another asked if I was “still a believer,” and yet another frankly labeled me agnostic.

These friends are seeing my musings after many years away—thanks to social media. Their own journeys seem to be keeping closer to their original faith, and mine not so much. There’s no doubt that it’s been a long road from my strict fundamentalist childhood to where I am now.

In preparation for one of my classes this semester I read Joseph Campbell’s The Hero With A Thousand Faces. I read of Osiris, the dying and resurrecting god who was the hope of eternal life for Egyptians, how sarcophagi have his face on them because people wanted to literally put off themselves and put on Osiris—the god-man who beat death—in order to get safely through the land of the dead.

Then there was Isis, who was impregnated miraculously and gave birth to a god. I first read of Isis and Osiris in a college apartment that reeked of dirty dishes and my roommate’s neglected pit bull, in Huntington, West Virginia. We huddled around a gas wall heater while snowflakes blew through gaps between the windowpanes. I was reading Areopagitica for my Milton class.

I still have the Complete Poems and Major Prose from that 1988 class. I had highlighted and underlined the passage in which the sad friends of Truth, “imitating the careful search that Isis made for the mangled body of Osiris” cast about looking for the Truth that has been “hewed…into a thousand pieces, and scattered…to the four winds.”

And there’s the Epic of Gilgamesh with its flood story which predates Moses by something like eight hundred years, and contains the story of Utnapishtim, an earlier Noah. It also has a serpent—the common enemy and bringer of death in ancient Mesopotamian literature—who steals Gilgamesh’s one shot at evading death.

On and on it goes. The world of ancient mythology is chockfull of uncanny parallels with stories that I grew up hearing were literal, authoritative versions of history.

The parallels are not the problem. Modern science has chucked these competing truth claims into the same bin labeled the best they could do before they knew better. It’s no wonder the tale of the bumpkin going off to college and losing his faith is a cliché. No wonder either that so many declare themselves agnostic and choose to think no more about it, but rather turn their attention to actually living in this world.

T. H. Huxley coined the word agnostic. He explained it this way: “It is wrong for a man to say he is certain of the objective truth of a proposition unless he can produce evidence which logically justifies that certainty.”

To Huxley, metaphysical, religious, spiritual claims are of no use. You are talking about things that can only ever be a matter of conjecture and opinion. People I know who call themselves agnostic say basically, “No one knows for certain, so why waste any more time and energy on it?”

For some reason putting an unknown-and-unknowable label on the debate and then checking out has never been a living option for me. I’ve always loved Fyodor Dostoyevsky: I recognize the feeling when his doubt rises and rises and rises. I also recognize the way, who knows how or why, faith always rises to meet it.

But in the rising, faith changes, takes on different shape.

This is also why I love reading Thomas Merton in dialogue with Buddhism, how he accepts ambiguity about ultimate things into his faith, and that somehow makes his faith deeper, richer.

In Don Delillo’s Falling Man, one of the characters, in the wake of the attacks of 9/11, thinks about all the variations of belief and decides she is, “free to think and doubt and believe simultaneously.” This sounds fair and honest to me.

Is that all we get? Would it be enough?

When asked where I stand vis-à-vis the old time religion, I have to honestly say, I don’t know. However, that is hardly the same as calling myself agnostic. My head spins in disbelief, but unbelief is no more a living option to me than turning away from the question is. I cannot shrug my shoulders and turn to more practically useful things. I sometimes wish I could; it would make for a happier life.

So, instead of agnostic I thought maybe I would call myself proelpizognostic or elpisgnostic, elpizo being the Greek word for hope. I asked my friend Amy, who is a professor of classics, what she thought. She said one of those two would work but elpizo doesn’t usually compound that way. She suggested proupomenognostic, explaining that upomeno means await, endure, abide. That’s perfect.

So proupomenognostic it is. I await a time when I will know. I still believe knowing is possible, even if it is always a knowing that thrives somehow, paradoxically, in the midst of doubt, hunger, longing.

October 3, 2012 The Tower of Light
Recent Comments
6 Comments | Leave a Comment
""It doesn’t matter when you start the Sinatra Christmas playlist or put up your tree. ..."
C_Alan_Nault How to Win the War on ..."
"Yup."
Max Marvel Finding My Inner Calamity Jane
"I an confused by the use of "aural" here: "In The Gutenberg Galaxy, he explained ..."
William G II The Gutenberg Imagination
"My friend is looking for a Pepper Smith he served in the army with, was ..."
Christine Budnack The Love Song of Pepper Smith
Browse Our Archives
get the latest from
Catholic
Sign up for our newsletter
POPULAR AT PATHEOS Catholic
1

Is “The Chosen” Realistic to the...
Messy Inspirations
Related posts from Good Letters