The Tower of Light 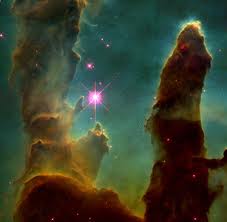 In the beginning God created the heavens and the earth and the makings of a kickass drama series for primetime television in America many generations hence.

At least that’s how I liked to imagine pitching it (but of course didn’t in the end) when beginning to develop the idea for said series this past summer, one inspired by certain stories, characters, and themes in the Book of Genesis.

In the interest of intellectual property, that’s all I can or should really say about the idea, even this little perhaps being too much given the copyright horror stories in Hollywood.

Now that I’m deep into the endeavor, though, of actually trying to write the damn thing, I have found myself questioning and wrestling with my creative process like never before. The irony of this timing is not at all lost on me in light of the very process that gets the heavens and the earth and everything else underway in the very first verse of Genesis.

Having become a writer in college with all my proper academic habits ingrained in me from years of mental marathoning to get into such a college (a smiling ouroboros is the image that comes to mind), those conscientious habits have served me well in some ways as a writer, but not so much in others.

Procrastination, the bane of many a writer, has never been a problem for me. Diligence, persistence, punctuality where relevant—these and other qualities come naturally.

But the spirit of abandon that might have hampered a fellow student in high school more prone to doodle and dither in the margins than take every test or assignment head-on? At least he or she did not grow accustomed to perfectionism.

Who knows how many times I had read or heard the opening chapter of Genesis since becoming a writer, before a simple but astounding revelation of the divinely creative process dawned on me. It was several years ago, well before this current project was conceived, but it has felt acutely pertinent in my current struggle.

So familiar is this verse that it took me a very long time to notice for the first time what it claims about the creative nature of God: first he created the light, and only then did he see that it was good.

If I’m not reading it wrong, this says a lot about an omniscient and all-seeing Creator, who apparently suspended the certainty of foresight for the pleasure of surprise.

While any artist out there would nod in principle if not always in practice, it is no small thing that even God would choose to put trust ahead of certitude in the creative process.

But given that blessed, vexing soft spot for duality in the scriptures, flipping forward a thousand pages and untold thousands of years brings one to Jesus’ parable of the tower builder with its own relevance to any artistic undertaking:

“For which of you, desiring to build a tower, does not first sit down and count the cost, whether he has enough to complete it? Otherwise, when he has laid a foundation, and is not able to finish, all who see it begin to mock him, saying, ‘This man began to build, and was not able to finish’” (Luke 14:28-30).

In other words, look twice before you leap; but in keeping with those other words above from Genesis, he who hesitates is lost.

Therein lies the tension, it seems, which might just hold the universe together at the atomic level:

We are not only created in God’s image, but creative in it as well.

Look to the novelist E.L. Doctorow and he will tell you that writing is like driving down the highway at night with the headlights turned off, where he can’t see more than a few inches in front of him. Look to the notebooks of Joyce Carol Oates, though, and writing seems more comparable to an architectural blueprint, in which everything but the prose itself is planned beforehand.

To each his or her own, then, and inevitably with much negotiation between the two modalities in any given case. Being more of a tower builder myself, it behooves me to indulge the maker of light. Ultimately, the twain shall meet, and do, in a tower of light.

A tower of light: I like that image, one reason being that I didn’t have it in mind before sitting down to write this piece. It transpired instantaneously without prior forethought, and I can see that it is good, very good in fact for my own process going forward if for nothing or no one else.

But I didn’t just arrive at it in a vacuum. Only by virtue of all the deliberation involved— the notes, the word count, the Hegelian framework of thesis, antithesis, and synthesis—did I get there.

The image, incidentally, happens to accord perfectly well with Judeo-Christian mystical thought in which the Holy of Holies, one term for which was “tower” in its earthly form, was perceived to be the luminous crucible of creation on day one in its eternal form—but that subject is for another post perhaps, on another day.

(Anyone interested in exploring it further, though, can do so with the books of the British biblical scholar, Margaret Barker.)

In the meantime, I have my work cut out for me on a script where the rubber will meet the road. Better get to it, now that I’ve spent a good part of the day meditating on the creative process with nothing but a blog post out in cyberspace to show for it.

But thank God I did.

October 3, 2012
The Evidence of Things Not Seen
Next Post

October 4, 2012 Words both Real and True
Recent Comments
1 Comment | Leave a Comment
""It doesn’t matter when you start the Sinatra Christmas playlist or put up your tree. ..."
C_Alan_Nault How to Win the War on ..."
"Yup."
Max Marvel Finding My Inner Calamity Jane
"I an confused by the use of "aural" here: "In The Gutenberg Galaxy, he explained ..."
William G II The Gutenberg Imagination
"My friend is looking for a Pepper Smith he served in the army with, was ..."
Christine Budnack The Love Song of Pepper Smith
Browse Our Archives
get the latest from
Catholic
Sign up for our newsletter
POPULAR AT PATHEOS Catholic
1