The Unbearable Badness of Ayn Rand 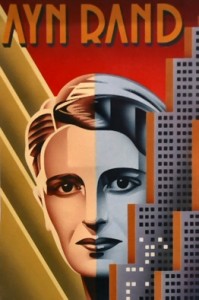 My good friend Marcelo has decided to read Ayn Rand’s fiction, to “see what all the hype is about.”

He has started with Fountainhead, the story of Howard Roark, the architect who heroically refuses to sacrifice his individual principles to the collective, no matter how they treat him. Marcelo is an artist, and he likes Roark’s pluck, his faith in his own artistic vision. Plus, Rand speaks with such conviction, it’s hard to resist.

As many young people do—in my experience, mostly young men—I once went on a Rand bender: Atlas Shrugged, We the Living, The Romantic Manifesto. I devoured the book by her disciple Leonard Peikoff, Objectivism: The Philosophy of Ayn Rand.

She starts with existence exists, which is her axiomatic principle, the starting point from which she builds her belief system. From there she is quick to deny even the possibility of spiritual reality. Eventually she ends in a place where selfishness is a high virtue, altruism a despicable vice, and capitalism the only sane economic system.

Her philosophy is harshly categorical, and corresponds to the developmental stage of black/white either/or thinking of youth. No wonder the people I run across who take her philosophy seriously are always young, at least in their thinking.

As unsavory as these aspects of her philosophy might be, that isn’t what makes her writing bad. She herself says, “The fact that one agrees or disagrees with an artist’s philosophy is irrelevant to an esthetic appraisal of his work qua art.” With this I agree.

In the intro to Mark Musa’s The Portable Dante we are told that the great poet intended for his writing to work on four levels: the literal, which is the observation of what actually happens; the allegorical, which gets at underlying theological or philosophical meaning (for example Virgil as the embodiment of human reason); the moral or didactic, for teaching the reader; and finally the anagogical, which opens spiritual or mystical truths.

The fact that Dante consciously designed his poetry to work on all these levels is not what brings readers back to him. The literal level is where the thrill of recognition grabs you.

Dante describes souls writhing in the seventh circle of hell, plagued by fire from above and burning sand from beneath: “They were in fact, like a dog in summertime / busy, now with his paw, now with his snout, / tormented by the fleas and flies that bite him.”

I am transported to my childhood in West Virginia, to the dirt road that ran between the church parsonage where I lived and the garbage truck garage. In the road is a mangy black dog with fur clumped into flat cakes, dropping to scratch, spinning to bite at fleas.

There’s the grotesque description of one who sowed schism in life, ripped bodily in half, “from his chin to where we fart…. Between his legs his guts spilled out, with the heart / and other vital parts, and the dirty sack / that turns to shit whatever the mouth gulps down.”

I remember a deer hanging from a neighbor’s backyard swing set, split open, its bloody innards spilled onto a blue tarp. Grotesque, even horrifying.

Dante is excellent on multiple levels, yet he begins where all good writing—all good art—must: true to the literal, so carefully observed, that you cannot help but trust it.

Rand’s fiction sucks for the same reason so much Christian fiction sucks. It is endlessly didactic, so busy preaching it forgets to pay close attention to life. Her characters deliver lectures. You don’t have to look closely to see they are puppets with Rand’s own lips moving eerily under the mask, her angry eyes staring out through holes in the rubber face. The bad guys in her books are straw men called collectivism, and altruism and they speak only in bromides and Rand gleefully bats them down.

Is it unfair to hold her to such a high standard as Dante? How about her contemporary Flannery O’Connor, who also saw her own writing as working on all four levels? Again Rand comes up short, and not simply because she’s not as good a writer—which she surely is not—but because her own aesthetic draws up short. She is writing bad fiction by design.

In her Romantic Manifesto Rand says, “The greater the work of art, the more profoundly universal its theme.” So far so good. She writes, “Art is a selective re-creation of reality according to an artist’s metaphysical value-judgments.” What exactly does that mean?

Rand believes the work should set forth the author’s vision of an ideal world, not deal with the world as it is. Art, according to Rand should deal only with what is “important,” which sounds fine, but the problem is that when, as Rand consciously does, the artist lops away parts of human existence she believes to be unimportant, we get substandard art.

The artist knows what she is out to prove and sets out to do it. No discovery for the writer, then none for the reader. Rand never lets the story itself say anything meaningful. You want to tell her to shut up already and tell the story. Or find a form more suited for argumentation, like an essay.

We come to art to find something important, no doubt. But it is in careful attention to the literal, physical details—quotidian, often smelly and unpleasant, even disgusting and scary—that we find the important thing for which the work is aiming. The artist is as surprised as everyone else to find the discovery hidden in the muck of life.

It is also in this close attention to the literal that paradoxically we glimpse the transcendent.

The lotus flower floats on the surface of the water, blooms in the glorious sunlight and air; but its roots are down deep underwater, in the slime of rotting leaves. It cannot be otherwise.

October 18, 2012
The Three Deadliest Words in the World: It’s a Girl
Next Post

October 20, 2012 Join Us for a Good Letters Event in Washington, DC, November 14
Recent Comments
18 Comments | Leave a Comment
"Ah, so now the imaginary War on Xmas is transmogrified into The War on Santa, ..."
David Miller How to Win the War on ..."
""Aural" refers to hearing, "visual" to seeing"
merphd The Gutenberg Imagination
""It doesn’t matter when you start the Sinatra Christmas playlist or put up your tree. ..."
C_Alan_Nault How to Win the War on ..."
"Yup."
Max Marvel Finding My Inner Calamity Jane
Browse Our Archives
Related posts from Good Letters