Which is the Better Story? Ang Lee’s Life of Pi 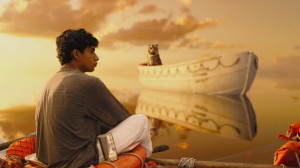 There’s a scene early in Ang Lee’s majestic Life of Pi film in which the main character watches everything he loves die. Pi is floating in a vast, murky sea as the ship carrying his family and their zoo animals recedes into the distance and sinks. His arms are stretched out wide and his whole body seems to reach for them as they slip away.

This is the moment when I forgot I was wearing 3-D glasses and felt as if I was in the water with Pi, losing everything I love. I’m not sure I would have reacted as viscerally as I did to the scene if it had not been produced in 3-D. As it was, I sat in my seat and wept.

It was, I believe, my first experience watching a feature film in 3-D, so it took some adjustment for me to take the film seriously. At first, the effect seemed hokey and contrived. Pi is a young boy exploring and embracing some of the world’s great religions—Christianity, Hinduism, Islam—while his father tries to convince him that reason is superior to any one of them and that to believe in them simultaneously is actually to believe in nothing at all.

God vs. Science in 3-D. You get the picture.

Perhaps there’s an analogy in this, because it’s not until Pi loses everything and is in danger of losing his own life that he is forced to wrestle seriously with the substance of his multi-faceted beliefs. Likewise, in real life, faith, whether it is in God, reason, oneself, or all three at once, is a bit of a joke until the believer has endured a scorched-earth test of faith.

It is then that the magic happens, both black magic and white. One is confronted, in extreme suffering, with the shocking reality that there seems to be no logic to the way pain is meted out in this life.

But one is also forced to grapple with the equally stunning revelation that beauty, hope, and love have the capacity to rise up and conquer the most horrific realities.

Yann Martel, the author of the best-selling novel that Ang Lee’s film is based on, said he thought his story was unfilmable, even though he saw it cinematically in his mind as he wrote. Lee said he couldn’t have realized his own vision apart from the use of 3-D technology. He knew, however, that moviegoers would need to adjust to what he called a “new cinematic language.”

Going into the theater I expected a visual masterpiece from the director of Crouching Tiger, Hidden Dragon and Brokeback Mountain. Lee more than delivered. The stunning imagery of glistening jellyfish, a star-studded night sky, and a fantastical island paradise, for example, not only make the lost-at-sea tale infinitely more bearable to watch than a film like Castaway, but the splendor also communicates a truer picture of reality, in my opinion.

Whether Lee intended to visually demonstrate that the stark facts of our lives are insufficient to describe their truest truths or not, I do not know. At a press junket after the screening I attended in New York City last month, he said Life of Pi is “on flow” an adventure tale about faith and hope.

That’s an anemic description if ever there was one.

The story is told in flashback, from the point of view of a middle-aged Pi. He is sought out by a writer who says he’s heard that Pi has a tale to tell that will make him believe in God. At the end of the film, after we’ve gone adventuring, we return to Pi’s living room. He concludes by telling the writer that investigators had come to his hospital room after he was rescued. They wanted to know how the ship sank and why, but refused to believe Pi had been lost at sea on a lifeboat with a tiger.

So he recites an ugly, stripped down memoir of cruelty and cannibalism. It turns everything the viewer has just seen upside down. One is left wondering what really happened.

Pi understands the dilemma and asks the writer, “Which is the better story?”

We’re back to his father’s vision of reality versus his own adolescent one. No easy answer is offered. Screenwriter David Magee said the implication is that Pi drew on both visions as he entered a brutal adult world that threatened to strip away his tender faith. Speaking of the tiger, which may have actually been Pi’s unregenerate self, Pi says, “My greatest enemy became my only hope.”

The conclusion may be deeply unsatisfying to some people of faith. I was unbothered by the ambiguity because I’ve experienced the kind of loss this story is about. I know how it tears at the substance of a person’s beliefs and leaves one naked in a sea of anger and uncertainty. This raw experience is every bit as real as the varied sources of hope that buoy one along, if one allows oneself to be buoyed.

I did not take from this film the idea that whatever story gets you through is true. Instead, I took from it affirmation that we pull from the many truths we know to get us through.

In the end, Life of Pi reminded me more of Tree of Life than of what I’ve seen (the trailer) and heard of Avatar. The comparison with the latter film is, I think, a lazy one. Life of Pi and Tree of Life are both sensual immersions into questions about the nature of reality. Ang Lee’s film is more playful, in part because it was produced in 3-D, but it is no less serious or memorable.

Christine A. Scheller is a widely published journalist and essayist. She lives with her husband at the Jersey Shore.

November 23, 2012 Holy Motors’ Motor Skills
Recent Comments
2 Comments | Leave a Comment
"I miss that dragon the most finally it's here. 😳IJ.636PX.CO/c7234i"
Dmaned11123 Poetry Friday: “The Burned Butterfly”
"Ah, so now the imaginary War on Xmas is transmogrified into The War on Santa, ..."
David Miller How to Win the War on ..."
""Aural" refers to hearing, "visual" to seeing"
merphd The Gutenberg Imagination
""It doesn’t matter when you start the Sinatra Christmas playlist or put up your tree. ..."
C_Alan_Nault How to Win the War on ..."
Browse Our Archives
Related posts from Good Letters