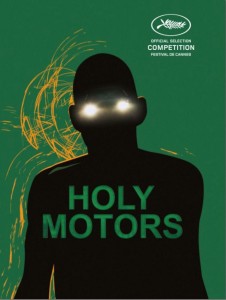 As Holy Motors begins, a sleepwalker leans against his bedroom wall, upon which a forest is painted.

Or might it be a real forest after all?

The sleeper—played by filmmaker Leos Carax—moves into it, like Lucy stepping into Narnia, where he finds a strange movie theater and a catatonic audience.

Here comes an ancient dog—both magnificent and menacing—stalking down the theater aisle. Perhaps he’s a portent of the death of cinema in the age of digital media. Perhaps he’s Carax himself, transformed, an old dog come to show us some new tricks.

And wow, does he have some new tricks. The wallpaper forest and the phantom dog are only the first of this movie’s many big-screen wonders. It’s a mesmerizing, multi-genre marathon, as if the director knows he’s dying, and so he’s showing us trailers for all of the films he’d make with world enough and time.

Still, this isn’t just a series of incongruous short films. Common threads bind these vivid sketches together with the sense of an urgent appeal.

Consider the film’s insistence on doing things the old-fashioned way: actors, makeup, wigs, costumes, and sets, instead of digital enhancement. Then consider how the film zigzags from moments that expose cinema’s artifice to moments that make us forget that artifice, that draw us deeply into a scene of particularity, performance, and emotion. By contrast, digitally enhanced entertainment seems cheap and unpleasant.

And then there’s Denis Lavant.

A great actor is a rare treasure. Even rarer is a film that enables the actor to demonstrate his full range of talents. Denis Lavant is a great actor, and Holy Motors is an ideal showcase for his gifts. He’s flamboyant and fearless, whimsical and compelling.

Chauffeured from scene to scene in a white stretch limo, Lavant plays a mysterious operative named Mr. Oscar who spends his busy day changing costumes in the backseat, then emerging to play a part in some mysterious charade.

And oh, the parts he plays.

First, he’s a rich businessman with a shock of white hair. Then he’s a hunched old beggar woman, his head bound up in a shawl. And then he’s liberated into motion-capture acrobatics, clad in spandex and bright white dots, performing moves that will serve as a model for animators. Eventually, he’ll be a mustachioed assassin and that assassin’s doppelgänger.

In what is already the film’s most notorious scenario, Oscar becomes a sort of subterranean satyr named Merde who crashes a fashion shoot inside Paris’s Père Lachaise cemetery, and then kidnaps the supermodel (Eva Mendez), dragging her into his underground lair, where he…

… how do I put this nicely? What happens next is disconcerting, not only because it’s the most sustained, garish display of male nudity you’re ever likely to see on the big screen, but because this naked, babbling monster seems to be turned on by dressing his captive in a burqa instead of stripping her.

Is this all just surrealist nonsense? Or is there meaning in Carax’s madness?

From La Belle et La Bete to Twilight, the bread and butter of moviegoing has always been stories of beauty and the beast. If Holy Motors is a film about movies, then perhaps this ghastly, hilarious scene is about the power of suggestion. Perhaps it’s about how the savage beast in all of us needs beauty and mystery for nourishment (the beast eats the beauty’s hair) and for consolation (he lays his head in her lap while she sings a lullaby).

Great cinema is the opposite of pornography—it eschews the obvious and the exploitative, inviting interpretation. At its best, it chooses mystery more than exposure, and prefers showing to telling. It enchants.

If this or any scene in Holy Motors disturbs you, wait five minutes. It speeds from one wild idea to the next, each scene a wave likely to sweep you away with its own inspiration. An interlude performed by an accordion marching band. A show-stopping song sung by Kylie Minogue in a vast, vacant department store. The deathbed scene from Portrait of a Lady played with such drama that I’m not sure if it’s meant to be poignant or a parody—or both.

In spite of Mr. Oscar’s antics, I suspect that his character’s name will become a sad irony. Most American moviegoers are likely to find Holy Motors too weird, to extreme, too difficult to interpret or categorize. It’s one of those movies that’s too imaginative to win Academy Awards.

Me, I’ve lost patience with movies that waste my time with disposable dialogue, that waste space with unimaginative imagery, that merely document one actor reciting lines to another. Don’t tell me how to feel. Don’t spell out obvious lessons. I want to see something that teases my mind into active endeavor. I want to experience my own emotional responses.

Later, when we’re given a glimpse of the animated fantasy built on the outline of their performance, the scene is repulsively excessive and full of extravagant fakery, and lacking in any of the power we felt watching that original dance.

It makes you wonder if the green-screen work for Avatar might be more compelling than the final animated production.

And that’s the thing about Holy Motors. Whether you call it inspiring, baffling, offensive, or exhausting—probably all of the above—I suspect you’ll agree with me that it is truly unforgettable. It demonstrates again and again that we have all we could ever need right here for enchantment and revelation, if only we put our hearts, minds, and bodies into it.

Despite the millions of dollars fueling 2012’s special-effects extravaganzas, I doubt I’ll experience anything as exhilarating as the sight and sound of that accordion band, marching like an army intent on overthrowing all that we’ve convinced ourselves we need.

November 26, 2012 Pennies for a Conquistador
Recent Comments
2 Comments | Leave a Comment
"Ah, so now the imaginary War on Xmas is transmogrified into The War on Santa, ..."
David Miller How to Win the War on ..."
""Aural" refers to hearing, "visual" to seeing"
merphd The Gutenberg Imagination
""It doesn’t matter when you start the Sinatra Christmas playlist or put up your tree. ..."
C_Alan_Nault How to Win the War on ..."
"Yup."
Max Marvel Finding My Inner Calamity Jane
Browse Our Archives
Related posts from Good Letters