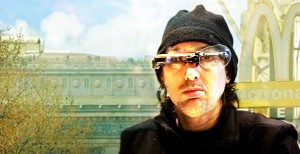 McDonald’s employees allegedly assaulted human cyborg Steve Mann in Paris, France on July 17, 2012. When this news item appeared in my Twitter feed, it marked the first time I had seen the word “cyborg” outside the realm of science fiction.

Two weeks after this incident, singer-songwriter Derek Webb released his latest album, Ctrl. In writing about the album on Twitter, Webb described it as an exploration of “the tenuous relationship between culture and technology.”

When I read about Steve Mann, I pictured him as a freewheeling, Happy Meal-eating renegade of the human race—one who lives at the topical intersection Webb describes as the heart of Ctrl.

When I interviewed Webb about the record prior to his concert in Leawood, Kansas, I asked him about the origins of the album.

“Everyone is walking around staring into screens and bumping into each other like lemmings, and increasingly so,” he said. “That’s what I wanted to write about—that condition, and that concern.”

On his blog, he states the importance of “having meaningful conversations about placing guardrails around the technology in our lives.” If we heed Webb’s call and establish a modicum of self-control with our gadgets now, perhaps we will fare better in the future if cyborgs become as commonplace as smartphones.

Webb’s Ctrl LP follows on the heels of the Sola-Mi EP, which was released a month prior to Mann’s assault. The EP provided a first-person account of a machine named Sola-Mi attaining something like human consciousness.

Ctrl’s protagonist is the converse of Sola-Mi—a man who attempts to realize his inmost fantasies through immersion in technology. He may not be a cyborg like Mann, but he may be less human than Sola-Mi.

“He falls in love with the reality of his subconscious dream life, and turns reluctantly to technology to try to have and inhabit and sustain that,” Webb explains. “In doing so—this is where it kind of turns into a magical situation with no scientific explanation—he accomplishes it. But it’s completely overwhelming, and it destroys him. At the end of song seven (‘I Feel Everything’), he thinks he’s dying in the virtual world. In song eight (‘Reanimate’), he wakes up and can’t believe he survived it, and he’s grateful.”

“I Feel Everything” ends with the sound of a flatline on a heart monitor. The sound carries over into “Reanimate,” and then the heartbeat begins anew, as if unseen defibrillation paddles have revived the album’s dead dreamer.

Of all the sounds Webb uses on the album, however, the use of Sacred Harp music from previously existing recordings stands out the most. It opens the album, and breaks through elsewhere like sunlight through cloud cover, with voices as sharp as barbers’ shears.

“Sacred Harp music may be the most primitive form of American folk music,” Webb says. “To hear a hundred people of all ages singing at the very top of their lungs in four-part harmony with no other accompaniment is just a terrifying sound. I decided to combine that with the most modern techniques of sampling, editing, and programming in terms of drums.”

The result is a strange synthesis of the organic and the technological, and what Webb describes as an intentional “juxtaposition of the ancient and the futuristic.”

When I note that Sola-Mi and Ctrl both seem to focus on the spiritual chafing that results from humanity’s increasing reliance on technology, Webb goes one step further.

Webb made this information public in a blog entry titled “What is the Nexus: The Hidden Meaning Behind Ctrl,” including a screen capture that rightly removes the opening track (“Keynote”) from the Sola-Mi EP in the playlist. Song two (“Mother Mother”) is where the flatline begins.

“The male character on Ctrl does not wake up,” Webb says. “He’s dead. But what he doesn’t realize is, his actions have given way to something he doesn’t totally understand. Sola-Mi basically comes in and picks up his life where he left off.”

Situated in the context of Ctrl, the Sola-Mi narrative resembles the story of Pinocchio. Sola-Mi is not satisfied with mere consciousness; she wants to be real. As the EP gives way to the remaining songs on Ctrl, she becomes a living, breathing, organic being.

“All three of the last songs on Ctrl have lyrics that mean two things,” he says. “If you notice, Latifah Phillips’s vocals double mine on those songs, too.” Phillips, who fronts hymn revisionists-slash-revivalists Page CXVI, performs the part of Sola-Mi on the EP, so her presence on the last three songs on Ctrl is a clever continuation of her narrative.

The song “Around Every Corner” closes Ctrl, and offers the parting words, “Don’t you follow me.” In the context of the Ctrl album as a freestanding work, the words are cautionary. With Sola-Mi’s narrative spliced into the story, the words are a plea for discretion.

While neither Ctrl’s character nor Sola-Mi wish to be followed, Mr. Webb does. Follow him on Twitter (@derekwebb), and experience his constructive disruption firsthand.

Continuing the gift of free music:

Page CXVI, which opened for Webb, is offering its nine-song “B-Sides” collection. The band’s name is a reference to page 116 of C. S. Lewis’s The Magician’s Nephew. Read more about its meaning via the above link.

“Good Letters” blogger Chad Thomas Johnston’s ten-song 2004 Christmas album, All is Calm, All is Bright, is available via SoundCloud. The expanded, remastered reissue of the album, Stalking Stuffers: Coal for the Stocking in Your Soul, is available at NoiseTrade.com.