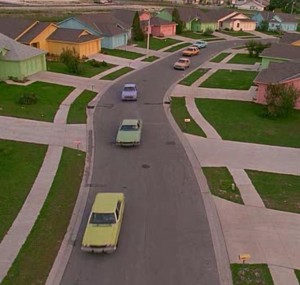 For Peter and Jackie Cooley, who live in one.

“So what do you know about East Pines?” I directed the question about a nearby neighborhood to an acquaintance whom I know solely as a friend on Facebook, a local historian who has written widely on the postwar country music scene in Prince George’s County and the “haunted boy of Cottage City,” who was the inspiration for The Exorcist.

“Not much,” he typed back. “You could check the Prince George’s archives.”

It was a response that was both a surprise and not. A surprise that even an expert on these old inside-the-Beltway neighborhoods knew nothing about this particular one, and at the same time, a confirmation of the neighborhood’s generally unassuming quality—it is a place that appears as though it is used to being forgotten.

East Pines has not, however, been forgotten by me, and my thinking about the place has recently begun to border on mild obsession, the subject of lunchtime Google searches trying to track real estate values and whether or not there’s still an active homeowner’s association. Sometimes after dropping the children off at school, I will make an unexpected turn onto East Pine Drive, and for a few quite moments, wander its eerily quiet, meandering lanes.

The neighborhood straddles the Baltimore-Washington Parkway along a stretch of inner-ring Prince George’s that is both wooded and interspersed with tired, half-century-old commercial strips, now given to pawn shops and medical equipment stores and Plexiglass-countered Chinese carryouts, though Pizza Oven proudly proclaims that it has been in the same location since September 1957.

Beyond the fluorescent lights, up the hills and through the trees, the little houses stairstep up the curving roads, almost identical, and from the looks of them, they are little more than a thousand square feet apiece. Even before we moved into a neighborhood nearby, we would sometimes be driving back from my in-laws’ house in Baltimore, when I would glance at the yellow lights glowing through the windows, and strain to see if I could catch a glimpse of any human framed inside them.

These are neither the airy 1920s Craftsman bungalows of nearby communities Riverdale or the above-mentioned Cottage City, nor are they the brick 1940s Colonials in the neighborhood where I live, with their thin veneer of gentility and social pretension: “The Chevy Chase of Prince George’s County,” my neighborhood is sometimes, with tongue in cheek, called.

It goes without saying that these small houses are not the “tiny” houses, or the “not-so-big” houses that have been in vogue among the cognoscenti during the last fifteen years (I love them, too)—with their bare, curated spaces, gleaming blond wood floors and spare handcrafted artworks, giving the atmosphere of an Ingmar Bergman film.

No, these houses are as plain as plain, metal- or asbestos-sided, sometimes painted the colors of Sweet-Tarts, but invariably looking washed-out. As writer D.J. Waldie noted about his own similar neighborhood, Lakewood, California, in Holy Land, “Middle class houses are the homes of people who would not live here.”

As it happens, I grew up around these kinds of houses.

But I did not grow up in one myself: Our house started out the little bungalow, but then had been added onto two or three times, so that it was at the same time both overweening and Puritan, the dining room giant and expensively-furnished but utterly plain, and the collections of books and records and magazines—Norman Mailer, Billy Graham, a volume called “Sex Before Marriage” found in an upstairs drawer—bespeaking of psychological dichotomies I still don’t understand.

It was Mrs. Rubynelle Cowsert’s house down the street that fascinated me, and still occasionally lights up my dreams. The small house with the Duncan Phyfe sofa, the afternoon tea served in good china, accompanied by cookies on a plate at the polished formal dining table in the tiny formal dining room.

Back then no one assumed that a formal dining room was only for the wealthy, that the middle class would be expected to eat in front of the TV, or on high stools at the counter.

It goes without saying that the houses of East Pines are largely populated by immigrants now, either from Latin America or West Africa, or with African-Americans who came in an earlier wave. Here and there are still representatives of the old white, working class Prince George’s who didn’t get the message that it was time to move even further out—the “white people that time forgot,” I always think of them.

But it’s not the loss of white hegemony I’m haunted by, that keeps me circling these streets, trying to distinguish one house from another: There are blasted-out front yards, leaning trees, and buckling sidewalks, snaggletooth windows either blank or covered by the telltale swag of acrylic blankets tacked to the frames, on the one hand. On the other hand, there are neat little bungalows with new vinyl siding, a plaster Virgin Mary in the yard, and a line of tulips up to the porch.

I identify with the new East Pines, in the end, as much or more than I do with the old: I am an immigrant to this area as much as anyone else.

I think it is an apocalyptic vision I see in these overgrown hills, a concrete manifestation of the truth that as we live our death, our needs for shelter must only grow smaller, until we surrender everything—finally the body itself—before God. We have no other help, Orthodox Christians chant about the cross during Lent.

These wooden houses are nothing less than testaments to human longing and struggle, and the modest ways in which these little houses help to frame and contain those passions—via little living rooms, tiny formal dining rooms, arched telephone nooks in the hall, and ironing boards that fold down from the wall on a hinge.

March 14, 2013 It Ain’t All Bluegrass, Blues, and Ribs
Recent Comments
5 Comments | Leave a Comment
""It doesn’t matter when you start the Sinatra Christmas playlist or put up your tree. ..."
C_Alan_Nault How to Win the War on ..."
"Yup."
Max Marvel Finding My Inner Calamity Jane
"I an confused by the use of "aural" here: "In The Gutenberg Galaxy, he explained ..."
William G II The Gutenberg Imagination
"My friend is looking for a Pepper Smith he served in the army with, was ..."
Christine Budnack The Love Song of Pepper Smith
Browse Our Archives
Follow Us!