Art as a Common Gift 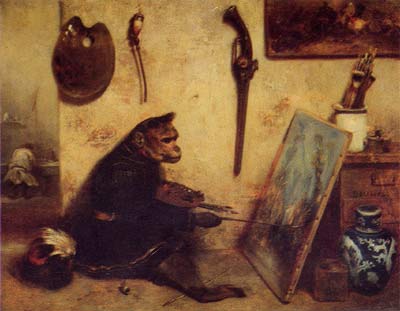 Given the several ways of modernist art it is logical to conclude that the production of things to see and read is not a rare or special gift.

A casual traipse through Tumblr—an Internet miscellany of photography, found art, confessional essays, and often painfully sentimental teenage poetry—indicates Barzun may have been right that the means of producing art “is populistically distributed to all or nearly all.”

Toss in the explosion of self-publishing, add the pastiche of comedy, jeremiad, and layman picture-snapping that permeates Facebook and Twitter, and logic suggests that if one were tasked with tallying people creating art, it might be faster to subtract from census statistics the people who don’t draw or build or write or play.

Barzun’s opposition to the democratization of art didn’t spring from puritanism. He praised not only “traditional” works, but also cubism, surrealism, and even the modernism he faults for inaugurating the Art of Everyman.

What he decried was the fact that the growing number of lesser artists means more bad art—a bitter tonic for someone with demanding aesthetic tastes.

All that that mediocre art, after all, has to go somewhere:

There has sprouted throughout the western world a great number of museums, galleries, workshops, sidewalk shows, and government or business programs to exhibit, sell, or send abroad as propaganda the increasing mass of works….These new art centers have been seconded by schools, hospitals, and other sources of wall space so as to accommodate children’s art, art by the physically or mentally disabled, art by convicts, art by chimpanzees.

One can almost read that last sentence as Barzun’s theory of artist evolution. Six hundred years of western civilization have carried us from Chaucer to chimps. As art’s aims and demands have slackened, “the demand for genius has died out.”

More artists means more bad art, but worse still, more artists may mean less happiness. A very grim, scientized study of happiness purports to demonstrate—with bar charts, no less—that absorption in even the most menial tasks yields greater happiness than the “mind-wandering state” that we artists recognize as essential to our crafts.

This might explain the moody content of all those Tumblr blogs, come to think of it. Artists are a tortured lot, even the lowest of us, and we might all be better served—and with us culture itself—if we took up gardening instead.

“If a thing is worth doing,” Chesterton wrote, “it is worth doing badly.” I’ve reassured myself with this adage when dancing, doing housework, and yes, writing. Most of us aren’t great at most things. But does that mean we shouldn’t do them?

Genius is rare. Barzun is right about this, but he is wrong about what it means. When it comes to art, at least, he appears to worship, as St. Paul might observe, the created thing above all.

Perhaps it seems illogical to criticize an anthropocentric view of art. Art is, after all, created by humans as an expression of our fears, our exaltations, our wonderment, our despair. Though we differ over individual works, most of us likely join Barzun in calling praiseworthy what pierces us with truth.

We might even agree with Barzun that there’s too much bad art, too much ineptitude and untruth and poor expression that only obscures the vision of hearts yearning for beauty.

We who believe man is created in the image and likeness of God, however, view art as something more than a struggle to perfect self-expression. It is a striving to express the Godlikeness within oneself, which means that it is the fruit of searching and calling and finding something divine.

The fact that wide swaths of people endeavor to create something—a poem, a photo collage, yes, even another teen paranormal sci-fi thriller novel—ought then hearten us. In these imperfect endeavors we have proof that the spark of divinity has not flickered out.

Yes, much of what we make is dreck; yes, it’s often driven by narcissism and psychosis and all manner of dysfunction. It’s twisted because we are twisted, but it still pours forth from children of God who are striving to imitate the Father, even those of us who have stopped believing in him.

Imagine that. Millions of people, many of them knowing not the first words of orthodox praise, harboring scant knowledge of theology, yet all of them whispering back to the whisper within their spirits, imitating the God they may only know, many of them, as the urge to arrange words in verse, the craving to strum a power chord with the amp cranked up high, the yearning to dance because sunlight has come pouring through the windows in a slant that overwhelms our adult insistence on having a reason for joy.

What ought to make us weep are not scores of sentimental poetry blogs, but the crowds of teenagers who neither read nor write, who consume one another in gossip and scarcely articulate conversation, who create nothing and feel no yearning to create.

It’s far better to have a nation of sculptors scarcely capable of making a workable paperweight, than a nation of consumers who have lost touch with the divine impulse to create.

Barzun recoiled from the common man as artist, but I say: embrace him. We carry in our inept hands, after all, the very heart of God.

April 19, 2013 The Eucharist: Eat, Eat!
Recent Comments
7 Comments | Leave a Comment
"Ah, so now the imaginary War on Xmas is transmogrified into The War on Santa, ..."
David Miller How to Win the War on ..."
""Aural" refers to hearing, "visual" to seeing"
merphd The Gutenberg Imagination
""It doesn’t matter when you start the Sinatra Christmas playlist or put up your tree. ..."
C_Alan_Nault How to Win the War on ..."
"Yup."
Max Marvel Finding My Inner Calamity Jane
Browse Our Archives
Related posts from Good Letters