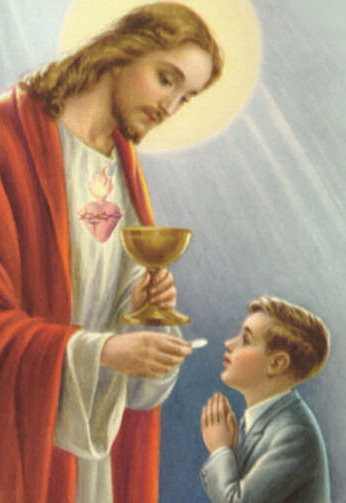 We sit in the back pew at church with intention; there’s an easy exit if our two-year-old’s patience has run out, or if ours has. Bible stories shine down on us hopefully from brightly colored stained glass windows on either side of the church.

Earlier I made spelt French toast for breakfast and my son ate three pieces, but halfway through the service he’s hungry again. He’s played with the hymnals, and retrieved every stuffed animal from the basket at the rear of the church. We work on silent diversions when he tries to use the visitor card pen on the pews themselves.

Then he has another idea. “Eat, eat!” he says, with sudden and sincere desperation in his eyes, just as the congregation says “the Lord Jesus Christ took bread, and gave it to his disciples, and said ‘take, eat, this is my body…’”

My son makes the sign he learned before he could say his first words, fingers and thumb together at the side of his mouth. He’s hungry. He’s asking.

“Just a minute, sweetheart,” I whisper, hoping he will find the patience of a few more minutes. We have raisins in the diaper bag, but my husband was mortified the last time we walked up to the communion rail trailing graham cracker crumbs.

“Eat,” my son says again, thankfully sotto voce, though my anxiety is increasing with his determination. We’re making a small commotion and the parishioners just in front of us turn and smile at me and voice the words: “How cute.” Do they really think that?

“One minute sweetie, and we go to communion,” I whisper in his ear. “”Remember? We go up to the front and we eat.”

I feel momentarily sacrilegious and overly simplistic. We don’t just eat. We go to share the table with the communion of saints.

We have one precious moment when we kneel with his Papa and Nana he will never meet, with my Grandma who died before he was born, with the Grandma who just died, all of us at the table together, taking God into our bodies, honoring God’s indwelling in us, in our physical bodies, in our everyday lives.

My son simply wants a snack, and I just told him “Just a minute, and we’ll eat”?

When he started solid foods, I wasn’t even sure he should take communion right away. I liked the idea of ritual around the sacrament, a First Communion, new clothes and a specific day with the chance to talk about the sacrament that would require the budding genius of a five-year-old.

Twenty-first century Episcopalians don’t typically make a big deal of First Communion, but I figured our family could adopt the tradition. We could make Sam’s first experience of the Eucharist meaningful, because the Eucharist was meaningful for me in a way I had never expected.

I had known it was a sacrament, and known that it was supposed to be a big deal when I grew up in the church. But until I experienced real loss, I didn’t understand.

I came back and recognized a spiritual need for the Eucharist so much deeper than any possible physical hunger that I blinked in amazement, and came to it like a woman starving.

The word eucharist comes from the Greek eucharistos, meaning grateful. At first I did not know enough to be grateful. I came to the table to be reminded that God was in me, that maybe this meant I was still alive. Then I came to be grateful for God in my life, even if some people no longer were.

So I wanted my son to understand this sacrament, understand its mystery and its power before he went to it. I wanted him to understand how it can curl over and around and through each part of us like water, filling up the empty places.

Our bishop came last autumn for his annual visit to our parish. As we left the service and stood in line to shake his hand, I held our son on my shoulder.

“What do you think about young children taking communion?” I asked him when our turn came to say hello. “Should we wait and make it more of a special occasion?” He seemed to me a man of wisdom and faith and pragmatism. I wanted his guidance.

“I think children should only have memories of coming to the table as part of Christ’s body,” he said.

It may have taken until my thirties to have the Eucharist come upon me, but it was hardly fair to expect my future five-year-old to internalize my awkward explanations and attain precocious enlightenment. And yet, innocence might understand far more than I could hope to impart.

Perhaps the greatest experience of sacrament is understanding its presence in the quotidian. Perhaps it was I who needed to understand the mystery. My son was a part of the body of Christ. It was his table, too.

So when he looked at me with plaintive eyes wavering with despair, I whispered, “Just a minute, and we’ll eat!” For all of its mystery, that’s what we would do. That’s what we are meant to do.

We walked to the front of the church, and knelt on the kneeler, and he took a wafer in his soft mouth without hesitation. We ate.

I was hungry, and you gave me food…

Thank you Lord, for feeding us.

April 22, 2013 The Inestimable Value of Clichés
Recent Comments
5 Comments | Leave a Comment
Browse Our Archives
get the latest from
Catholic
Sign up for our newsletter
POPULAR AT PATHEOS Catholic
1