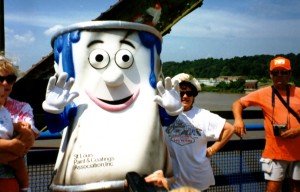 Immediately what had been said about Nebuchadnezzar was fulfilled. He was driven away from people and ate grass like the ox. His body was drenched with the dew of heaven until his hair grew like the feathers of an eagle and his nails like the claws of a bird.

In the summer of 1999, I wore an anthropomorphic foam-rubber “Mr. Recycled Paint” costume in 104 degree heat in a parade that began at Chain of Rocks Bridge in St. Louis, Missouri. It was an exercise in instant humility for me, as it would be for anyone forced to don such an abominable outfit.

Allow me to clarify something upfront: I did not volunteer for the onerous honor of playing the part of Mr. Recycled Paint. As an intern at the largest independent public relations firm in St. Louis, my employer enlisted me for this exercise in embarrassment, and thereby satisfied some sadistic client contractual obligation.

So in exchange for wampum, my employer promised that the lowest person on the totem pole in the firm would sweat buckets in a giant paint can that had arms, legs, and a face.

The countenance of this character was frozen in the sort of smile one almost never associates with recycling. Blue paint dribbled down the body of the costume from the rim that ran around the top of the can. It was as if Mr. Recycled Paint had horrible hygiene and refused to clean up his acrylic excretions.

“So…who are you supposed to be?” one person after another asked me prior to the parade.

“I’m Mr. Recycled Paint!” I shouted, attempting to break through the foam-rubber barrier that separated me from others. Thanks to a band of black mesh in the mascot’s mouth, some sound could escape—and I could breathe, too.

Churlish children chortled as they grabbed the paint can’s semi-circular handle, which rested against the backside of the costume like an oversized doorknocker, and proceeded to slam it against the paint can over and over, probably to see if anyone was home. While the face on the costume smiled, I scowled inside.

I thought the whole thing was beneath me.

Of course, I would only find out that I was beneath everything and everyone when I began applying for entry-level positions before graduating from college the following May. But at the time, I was a legend in my own mind. I wrote music reviews for magazines, regularly performed as a singer-songwriter at coffeehouses, and excelled at school without much effort.

I suppose I thought of myself as king of my own domain, and playing the part of Mr. Recycled Paint made me feel like a peon. Surely I deserved better! Even my wife Becki, who wore a Yogi Bear costume at Jellystone Park in Caledonia, Wisconsin, during her teenage years, had it better than I did. At least children recognized her.

But my fate could have been much worse. Consider Nebuchadnezzar, for example. I have always been fascinated by the Babylonian king’s story, and as a child I felt a strange kinship with him because my name was nestled in his.

But the identification stopped with Daniel’s words to Nebuchadnezzar:

You will be driven away from people and will live with the wild animals; you will eat grass like the ox and be drenched with the dew of heaven. Seven times will pass by for you until you acknowledge that the Most High is sovereign over all kingdoms on earth and gives them to anyone he wishes (Daniel 4:25).

Had Nebuchadnezzar’s sanity been intact when Daniel’s words came true, he probably would have felt it was beneath him to graze in the fields on all fours, prostrate as his own subjects had been before him. Perhaps his subjects encountered him in his beastly state and recognized him despite his matted hair and gnarled nails.

Luckily for me, no one knew who manned the Mr. Recycled Paint costume in the parade that day. Even so, I had to deflate my ego a fair amount to fit into that suit.

While I do not believe the costume was a punishment from God for excessive pride, wearing it did humble me. Part of this had to do with the news crew that showed up and beginning asking me questions.

“Mr….Paint Can, I presume?” the reporter inquired.

“Well hello there, Mr. Recycled Paint,” she said. “Can you tell our viewers about the paint recycling process?”

No one at the firm had told me anything about the finer points of recycling paint. My superiors probably thought the media would never approach anyone wearing that costume, which some people mistook for an inexplicably cheerful drum of radioactive waste.

“I don’t really know anything about recycling paint!” I shouted to all of St. Louis. “I’m just wearing this costume! Sorry!”

With those words, my humiliation became a televised event.

It was probably the first time anyone in the public relations business had ever failed to conjure up claptrap at the drop of a hat for a camera. I would never make it in PR, where business and bullroar were one and the same.

When God restored Nebuchadnezzar’s sanity, the humbled king praised his maker. When I removed that cursed costume after the parade, I probably said, “Thank God!” too—but with a slightly different tone.

I would never play Mr. Recycled Paint again. But I would carry the lessons I learned from him wherever I went. Namely, that it is better to walk humbly than to be proud, and better to stoop as a peasant than to crawl as a king.

The following Monday, when my boss asked how I fared at the parade, I said, “I think I was on TV. They asked me about recycling paint, but I said I didn’t know anything about it. Other than that, it was fine, I think.”

My career in public relations was short lived. I do not wonder why.

Chad Thomas Johnston is a slayer of word dragons who resides in Lawrence, Kansas, with his wife Rebekah, their daughter Evangeline, and five felines. His writings have appeared in The Baylor Lariat and at CollapseBoard.com, home to ex-Melody Maker critic/Nirvana-biographer Everett True. In May of 2013, eLectio Publishing released Johnston’s writing debut, Nightmarriage, which can be purchased here.

June 10, 2013 Wiman and Words
Recent Comments
1 Comment | Leave a Comment
"Ah, so now the imaginary War on Xmas is transmogrified into The War on Santa, ..."
David Miller How to Win the War on ..."
""Aural" refers to hearing, "visual" to seeing"
merphd The Gutenberg Imagination
""It doesn’t matter when you start the Sinatra Christmas playlist or put up your tree. ..."
C_Alan_Nault How to Win the War on ..."
"Yup."
Max Marvel Finding My Inner Calamity Jane
Browse Our Archives
Related posts from Good Letters