The Narratives We Need, Part 2 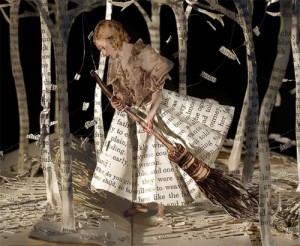 Recently I sang Benjamin Britten’s War Requiem with the Seattle Symphony. In his adaptation of The Requiem, Britten juxtaposes Wilfred Owen’s poetry with the Latin mass. The male soloists sing Owen’s poem “The Parable of the Old Men and the Young,” the story of Abraham and Isaac, right up to the angel and the ram. But in Owen’s poem, Abraham kills Isaac, “and half the seed of Europe one by one.”

Turning an ancient story on its head, using a corrupted Old Testament story to represent the terror of the world wars, is horror at an elemental level. The depth of this horror shows how much our stories are knit into our bones; ripping a story apart rends us in two. How much then, must these stories be making us whole?

I believe in being intentional. But I wonder at our desire to make our own decisions about what these formational stories should be—to suppose our individual sensibilities might do better than centuries of a more collective wisdom—instead of holding ourselves accountable to discerning the wisdom in the stories that make us up.

I want the ancient stories for both my sons, the ones people have studied and considered for millennia. This is part of my terror at my three-year-old’s request to “tell me a story.” Do I understand them well enough to tell them to him? I do not. Am I doomed to pass on my own shortcomings?

I ordered a toddler’s Bible. Sometimes we add these stories to the others we read: The Big Hungry Bear, The Three Questions, Make Way for Ducklings.

The stories I tell my son on request after the books, though, still seem weak. There is rarely a narrative arc. Usually he has an idea of what he wants: For me to tell him a story about him going fishing with Curious George. For me to tell the story of him in the fire truck putting out the fire.

I start to understand: These stories give him agency. He gets to decide what he is doing. He gets to be part of a solution. He has a chance to do the things we read about in books.

Last December, twenty children and eight teachers were gunned down at school in Connecticut.

Runners became amputees in the terror of this year’s Boston Marathon, and another child died.

This past December, my second son came gasping into the world.

How can we live our sorrows and our joys without our stories?

How do I give my son the stories he needs for what he will face?

Perhaps it is not so bad that The Lorax speaks for our neighbors. Perhaps The Lorax is a partial understanding of the exhortation to be stewards of the earth, as much as it is missing in nuance, in divine benediction and gift. Tinker Bell and Puff the Magic Dragon remind us of the power of belief. All show that the deepest parts of our humanity yearn for meaning.

I am hopeful we might be making our way back to our stories. That my attempts at home and at church to weave my son into a narrative might connect to the world he lives in, too. And that his growing sense of agency will allow him to find footing and his own way forward in the stories of old.

Shannon Huffman Polson is the author of North of Hope: A Daughter’s Arctic Journey. Her essays and articles have appeared in a number of literary and commercial  magazines including The Huffington Post, High Country News, Adventum, Cirque Journal and Alaska and Seattle Magazines. She can be found writing or with her her family in Seattle or Alaska, and always at her website, Facebook, and Twitter.

July 15, 2013 What We Learn
Recent Comments
0 | Leave a Comment
Browse Our Archives
get the latest from
Catholic
Sign up for our newsletter
POPULAR AT PATHEOS Catholic
1