Wabi-sabi: Living with Beauty and Ugliness 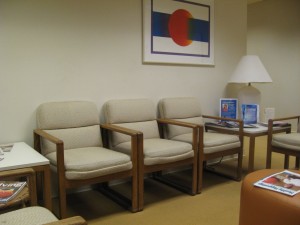 Both receptionists were away from the counter when I entered the waiting room for a physical therapy appointment. The waiting room, shared by several different offices, was lonely in mid-morning with only one man wearing all black and headphones sitting slightly hunched. I took a seat as far away as I could and picked up a magazine, anticipating a few minutes of quiet before my appointment.

The man was talking quietly, perhaps on a phone call, I thought, before turning my attention to the magazine and how someone had constructed a Japanese garden in a small space in the city. The article explained how the garden included the careful selection of plants, typically varying texture within the same palette of green, how boulders are placed to symbolize permanence, and rocks are used to represent a river.

I have been wrestling with a corner of my garden at home to tame it, to wrest something calm from this tiny bit of city flooded with the sounds of cars from an arterial a block away, the occasional siren, the occasional gunshot. A month ago I added a small Japanese maple in the center of the space next to the dish stone that catches water. Earlier this week I built a river using bags of rock from the garden store. The moss I planted is growing in patchily, and I have plans to add a few ferns and some mondo grass.

The magazine article showed a part of the garden entirely rock; small stones raked to give the impression of water. A side note described how to make the kind of rake to use to tend to the rock, to cultivate beauty, and perhaps, then, wisdom.

Out of the corner of my eye I saw the man in the waiting room move toward me, sliding sideways until he was two seats away. He was still hunched over and mumbling, and for a minute I ignored him; I had no interest in engaging.

In a slippery sudden moment, I understood he was, and perhaps had been, talking to me. His voice was low and smooth and edged with sarcasm.

“Oh, interesting,” he said. “No wedding ring, what a surprise, that’s a disappointment.”

I did not look at him directly but he was close enough that in my peripheral vision I could see he was holding a knife and seemed to be playing with it with his fingertips. The blade was six inches long, maybe more, and serrated. The handle and blade were black. I stood up quickly and said, “Excuse me” much more loudly than I might have.

The man leaned back, sinking away as though submerging, and said in the same silky voice: “Oh, I’m sorry.”

I walked away from the chairs, about to turn down a hallway when the receptionist entered, smiled, and said the therapist was ready. I was too stunned to say anything. I went to my appointment. On my way out, I mentioned the man to the receptionist, try to explain how uncomfortable I was.

“He’s a patient of the doctor down the hall,” she explained. “You know who he is?”

“He’s a neuropsychologist,” she said, smiling as though she had solved any lingering mystery. “I’m sorry you were uncomfortable. He doesn’t come in often.”

As the morning progressed, her information and the encounter did not dissipate into the day, as I expected. I remember years ago when I was living in Korea, a doctor was walking through the markets in Itaewon in Seoul with two friends who were also doctors, and a man walked out from a stall and plunged a knife into the doctor’s belly. He didn’t know the doctor, or have any political agenda. He was mentally ill. The knife sliced the doctor’s liver in half; there was nothing his doctor friends could to save him.

I thought of the way the man in the waiting room moved, how he sat, how he spoke, what he said. An element of the grotesque was unavoidable. The man had clearly been mentally disturbed. It occurred to me I may have been moments away from the fate of the doctor in Korea. Flashes of terror morphed into anger and back to fear, shape-shifting ugliness.

It came to me I should pray for this man, and I felt angry about that too, and then tried “Lord, bless that man,” but that felt false, and I lamented the fearful and dark part of me that balked at prayer. It occurred to me then that love is not only a feeling, but a command. And then words came to me: “Lord, steady his soul.”

Steady his soul. There have been times I could use that prayer for myself, in times of uncertainty or grief or horror when my construction of the world is blown apart, exposed for the charade it is.

The most terrifying thing about the grotesque is what we see of ourselves in its reflection. The most hopeful thing about the reflection is that it can change to something closer to beauty if we let it, if we train ourselves to hear the still small voice inside underneath what we’ve built on top of it. Perhaps I needed that prayer now, too.

My breath and heart rate had started to slow by the time I arrived home. Walking down the walkway to my kitchen porch, I noticed the leaves on the maple, wrinkled and tinged with brown as it struggled in a new environment. Weeds pushed up between the green mounds of moss; I would need to pull them.

Wabi- sabi is a principle of Japanese gardens, of art and life finding beauty in the imperfections, in the mutability of things. It accepts change and decay and even brokenness, seeing in these evidence of life’s journey. We live in the tension of permanence and impermanence, at any time a breath away from death. And on that path, on this journey, I have much to learn from both beauty and ugliness, around and inside of me.

October 1, 2013 New World
Recent Comments
0 | Leave a Comment
""It doesn’t matter when you start the Sinatra Christmas playlist or put up your tree. ..."
C_Alan_Nault How to Win the War on ..."
"Yup."
Max Marvel Finding My Inner Calamity Jane
"I an confused by the use of "aural" here: "In The Gutenberg Galaxy, he explained ..."
William G II The Gutenberg Imagination
"My friend is looking for a Pepper Smith he served in the army with, was ..."
Christine Budnack The Love Song of Pepper Smith
Browse Our Archives
get the latest from
Catholic
Sign up for our newsletter
POPULAR AT PATHEOS Catholic
1