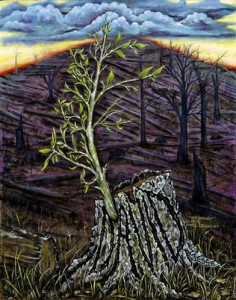 “What should I do for Advent this year, Bill?”

The year was 1993. Bill had been my spiritual director since 1985. He was Fr. William Shannon, retired theology professor and Merton scholar…but soon after our monthly meetings began, he was urging me (as he did all his friends) to call him Bill.

On his retirement from teaching, Bill had become chaplain of the Sisters of St. Joseph in our hometown, and he lived at their Motherhouse. In response to my question, he suggested, “Why not do what we’re doing here—paying special attention to the insertion in the Lord’s Prayer.”

It was the insertion at Mass that he was referring to, where the priest adds after “Deliver us from evil”:

Deliver us, Lord from every evil

And grant us peace in our day.

In your mercy, keep us free from sin,

And protect us from all anxiety,

As we wait in joyful hope

For the coming of our Savior, Jesus Christ.

At daily Mass at the Motherhouse during Advent, all the Sisters were saying these lines along with Bill as presider. My husband and I don’t go to daily Mass, but for Advent that year—and for many years thereafter—we said these lines at the start of our meals together.

I persisted. Just saying that prayer daily didn’t seem enough to live Advent’s spirit. So Bill began talking about his sense of parousia. It’s the Greek word for “being next to,” translated in the Latin Vulgate Bible into adventum (coming). “It sounds like a contradiction,” he said, “being next to the Lord who is coming. But it’s not really a contradiction, because the Lord who comes to save us is already within each of us.”

Bill delighted in this core paradox of Advent, which he returned to often during the twenty-five years of Advents that I went to him for spiritual direction, until his death last year.

“But how to live this paradox, Bill?”

To explain, he talked about the difference between Advent’s and Lent’s penance:

Here at the Motherhouse, our Penance Service, at the start of Advent, is gentler than Lenten penance. Lent’s is repentance for sins we’ve committed; Advent’s is preparation for the mystery of the Incarnation: waiting, watching, standing straight before the Lord, as Luke’s Gospel for the first Sunday of Advent (Luke 21:28) puts it.

All of which means, Bill and I agreed, resisting distractedness. The reading from Luke’s Gospel continues: “Be on guard lest your spirits become bloated…with worldly cares.”

“But, Bill, how to resist distractedness?” I asked, knowing I was sounding a bit like the broken record of the four-year-old who keeps asking “Why?…Why?…Why?”

One year when I asked this, Bill’s answer was to tell me about the discipline he himself was incorporating into each day of Advent: pausing between each activity of the day to say a transitional prayer—a simple “Come, Lord Jesus.”

This is harder than it sounds, since we’re all used to rushing (or at best flowing) from one activity to the next. But try this:

Before getting out of bed in the morning, “Come, Lord Jesus.”

Before getting up from breakfast, “Come, Lord Jesus.”

Before opening your computer and closing it each time all day, “Come, Lord Jesus.”

Before checking your Smartphone each time all day, “Come, Lord Jesus.”

After chatting on the phone, “Come, Lord Jesus.”

Before going out for a walk, “Come, Lord Jesus.”

On returning from a walk, “Come, Lord Jesus.”

Before checking to see if the mail has come, “Come, Lord Jesus.”

Before…well, you get the idea.

When I’ve tried to practice this Advent discipline, by dinnertime I’m astounded by how many transitional pauses I’ve missed during the day. One year when I told Bill of my sloppiness, he admitted that he had as much trouble remembering the prayer-pause as I did. But that doesn’t mean it isn’t worth trying.

As our years of Advent’s went by together (picture those calendar pages rapidly flipping over in old films), Bill would often animatedly mention his favorite Advent prayer—“the profound alternative Opening Prayer for Mass of the first Sunday of Advent.” He liked especially its formulation of that Advent paradox that he treasured: our being already in the Lord’s presence at the dawn of his coming.

our hearts desire the warmth of your love

and our minds are searching for the light of your Word.

Increase our longing for Christ our Savior

and give us the strength to grow in love,

that the dawn of his coming

may find us rejoicing in his presence

and welcoming the light of his truth.

We ask this in the name of Jesus the Lord.

November 29, 2013
He Loves Me Anyway: Black Nativity
Next Post

December 3, 2013 The World Is a Fine Place Worth Fighting For
Recent Comments
14 Comments | Leave a Comment
""It doesn’t matter when you start the Sinatra Christmas playlist or put up your tree. ..."
C_Alan_Nault How to Win the War on ..."
"Yup."
Max Marvel Finding My Inner Calamity Jane
"I an confused by the use of "aural" here: "In The Gutenberg Galaxy, he explained ..."
William G II The Gutenberg Imagination
"My friend is looking for a Pepper Smith he served in the army with, was ..."
Christine Budnack The Love Song of Pepper Smith
Browse Our Archives
get the latest from
Catholic
Sign up for our newsletter
POPULAR AT PATHEOS Catholic
1