The Second Coming of Flannery O’Connor 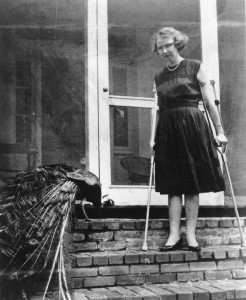 The ongoing conversation about contemporary literature and faith that I have been having with Dana Gioia and Paul Elie across half a dozen print and online venues, though it has touched on a dozen different issues, ultimately comes down to one: “absence” versus “presence.”

The question Elie has raised, you may recall, is whether we currently have novelists who “treat the main themes and the big claims made for religious belief.”

That claim has been subject to a series of challenges. Why does Elie focus on fiction to the exclusion of other literary genres, such as poetry and creative nonfiction? Why does Elie eliminate from consideration novels set in the past, like Marilynne Robinson’s Gilead? Why won’t he concede that a writer like Alice McDermott, who writes about the past, nonetheless presents us with contemporary narrators whose struggles to believe come in the form of trying to understand the faith of the preceding generations? Why won’t he examine in detail the lists of books that fulfill his rather restricted criteria—lists that include a number of books he says he hasn’t read?

It is very tempting at this point to rush down the rabbit hole in pursuit of various minor issues. It is also tempting to point out that we are living in a time when any cultured person’s “Top Ten” lists of greatest living artists would contain world-class artists of faith or those who grapple with faith: Marilynne Robinson and Cormac McCarthy in fiction, Sir Geoffrey Hill and Nobel Laureate Tomas Tranströmer in poetry, Richard Rodriguez and Annie Dillard in nonfiction, Arvo Paert in classical music, Bruce Springsteen and U2 and others in popular music, and so forth.

But I think the deeper question has to do with why so many people feel that we live in a time of absence.

Because even while extolling the writers of the past, thinkers like Elie and Gioia are never more postmodern than when they give vent to their sense that our condition is one of absence.

In 1967, one of the pioneers of literary postmodernism, John Barth, published a famous essay entitled “The Literature of Exhaustion.” It exemplified the general feeling among postmodern artists that we had emptied the storehouse of classic narrative strategies, that originality was a false and overblown concept, and that in some ways the best that writers and artists could manage was a sort of “sampling” or “quotation” of past works.

To use the fancy French theoretical terminology, the grand récits or “master narratives” had been proven to be false, oppressive constructs, and the best we could manage would be the smaller-scale, intimate, but authentic petites histoires.

Postmodernism attacked modernism’s penchant for epic gestures. And at its best, postmodernism has something important to say about the contingency of human knowledge and the limits of our social, personal, and artistic constructs.

By writing about “whispers” versus “shouts” I’ve tried to trace both the shifting cultural/literary contexts in which writing about faith occurs and the deep, tectonic shifts among recent generations in relationship to the master narrative of what Walker Percy called “God Jews Jesus Church.”

For example, I’ve noted that Percy considered himself postmodern in comparison to Flannery O’Connor: his work was not one of stark existential conflict in the Georgia backwoods but domesticated despair amidst the shopping malls and golf courses of places like Buckhead.

Elie asks whether writers are whispering “for reasons having do to with the spirit of the age and the workings of art in our age, or whether this approach rather is owing to timidity, limited means, lack of ambition, and a constricted sense of what is possible.”

Ultimately, that sort of question is one that readers will have to answer for themselves. I happen to believe the evidence points not toward timidity, but toward a deeply incarnational vision on the part of our best writers.

I have never contended that whispering was the only valid way of addressing matters of faith in art, only that it was characteristic of our time, a time characterized by disconnection from historic religious doctrine and practice, alienation from authority, and religious pluralism. And that it offered its own valuable aesthetic and theological insights.

The danger, however, is that Elie’s still-nebulous definition of what constitutes the “phenomenal” contemporary novel of belief will be interpreted by some (if not by him) as needing to look and sound a lot like a book by Flannery O’Connor.

The truth is that “the shock of the new” in the arts is precisely that the best new work won’t look like that of the past, which is one reason to pay more attention to the work of the whisperers. These writers, like the Impressionists and other artistic groups in the past, are being dismissed in their own time, but much of their work will endure and await a later generation’s more generous appraisal.

I understand what it means to revere the mid-century Catholic novelists. My conversion to the Catholic Church was sealed by my reading of Bernanos, Mauriac, Greene, Waugh, Endo, O’Connor, and Percy.

But I’ve also felt the siren song of declinism, the postmodern temptation to believe that we live in an era of exhaustion, and I’ve become convinced that it is a pathology, a form of postmodern despair. It makes us angry and inattentive, impossible to please.

It is also potentially a form of pride. The critic who says that we live in an age of mediocrity runs the risk of self-aggrandizement, the conviction that nothing is living up to her standards.

I understand the nostalgia for writers like O’Connor and Percy and C.S. Lewis who were publicly and unapologetically Christian—and still able to command a large cultural platform for their work. If we are honest with ourselves, we’ll acknowledge part of what we miss is that public recognition. But public recognition in the late postmodern era is one thing, artistic excellence, which is measured in decades and centuries, is quite another.

Which is why the power of the nostalgia leads us to distort the record.

For example, I believe Percy was easily one of the most insightful Christian intellectuals of his or any other era, but to think of him as a great novelist begins to stretch matters. After The Moviegoer he became more of a satirist and novelist of ideas—a parable-maker. This is something even many of his admirers concede.

Similarly, I’ve noted that the worship of G.K. Chesterton and Lewis, with their love of fantasy and romanticism, prevented later generations of Christians from appreciating the acerbic wit and satirical genius of Malcolm Muggeridge, a writer who now languishes in obscurity.

Matters of taste can get stuck in a rut.

Complicating matters is the politicization of the religious community, which has increasingly thinned out the quality and quantity of literary and aesthetic discourse in the leading Jewish and Christian magazines and journals of opinion, leaving those of us who care about these matters to carry on the conversation on blogs and Twitter, rather than at the heart of the faith community’s leading publications. Let’s pray that the current discussions will lead to change there.

As for me, I have found more than enough creativity in the present moment to fill a lifetime of reflection, much of it phenomenal enough to have earned Nobels, Pulitzers, and National Book Awards.

I don’t know whether we live in an age of gold, silver, or iron. But I know that trying to live in the past or future won’t generate new life in the present. Perhaps a deeper, more generative engagement with the present will be the sign that people of faith are moving us beyond the exhaustion of postmodernism.

January 28, 2014
Beyond Sight: The Imago Dei Project
Next Post

January 31, 2014 The Casserole Dish Manifesto
Recent Comments
7 Comments | Leave a Comment
""It doesn’t matter when you start the Sinatra Christmas playlist or put up your tree. ..."
C_Alan_Nault How to Win the War on ..."
"Yup."
Max Marvel Finding My Inner Calamity Jane
"I an confused by the use of "aural" here: "In The Gutenberg Galaxy, he explained ..."
William G II The Gutenberg Imagination
"My friend is looking for a Pepper Smith he served in the army with, was ..."
Christine Budnack The Love Song of Pepper Smith
Browse Our Archives
get the latest from
Catholic
Sign up for our newsletter
POPULAR AT PATHEOS Catholic
1