Beyond Sight: The Imago Dei Project 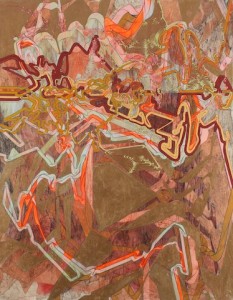 “The problem is that people are no longer seeing,” said Linnéa Spransy, a visual artist who currently lives and works in Los Angeles.

“It goes way beyond seeing,” replied the biologist Calvin DeWitt, as he turned towards her. “We are not pondering. That’s what Psalm 111 encourages us to do, and we don’t do it.”

Cal DeWitt is an environmental scientist and a professor emeritus at the University of Wisconsin who had been invited by Image to spend a weekend with nine artists and a theologian to ponder creation and evolution.

The gathering was an unlikely one, sponsored by the unusual pairing of Image, an arts organization, and the BioLogos Foundation, which is dedicated to science education.

The hoped-for set of conversations would initiate a three-year project to involve artists in exploring the tensions and resonances of evolutionary theory and a faith-based approach to creation.

Cal DeWitt was very familiar with the problem: as a Christian, he had often faced the problem of elucidating evolutionary theory to other Christians, only to find opposition to the science he presented.

“I blame this on our historic ‘top-down’ theology,” he remarked during his opening presentation. “We refuse to view the facts of nature as the acts of God. Truth cannot be an enemy of truth. God is not divided against himself. A physical fact is as sacred as a moral principle.”

“I really don’t think that we should correct people’s thinking,” he added, “I think we should ‘be still and know’…. The real problem that Christians are having is this: In the light of all of this evidence, do we matter? Science cannot answer that question.”

Jeremy Begbie, a well-known theologian from Cambridge and Duke universities as well as a professionally trained concert pianist, was seated in a wingback chair, typing energetically into his laptop. His presentation on the following day would begin with and elaborate on the premise of that last statement.

Image had gathered this group on Whidbey Island, north of Seattle, an area with which Cal DeWitt was very familiar—it was here that he had founded the Pacific Rim Institute in 2009, dedicated to providing field studies for Christian students via the Au Sable Institute of Environmental Studies.

After explaining the physical limitations of human sight, Cal began to show LIDAR (Light Distance and Ranging) images of Whidbey Island—satellite images that substitute a visible color for specific wavelengths, allowing one, for instance, to see how the retreating glacier had formed the land beneath the vegetation in undulating patterns.

While he spoke on the need to update the case for Darwin (“we need a term for evolution that is not ‘evolution’”), he was clearly more comfortable discussing the observations of environmental science.

The afternoon session had been set aside for the artists. Most of them did not know one another, and Image had requested that they bring some representation of their work, by way of introduction. As Linnéa Spransy took us through several slides of her paintings and installations, she began talking about her process.

“I’m obsessed by rules,” she said, in what would turn out to be a characteristically quiet voice: “My pieces are all based on mathematical relationships, formulas that dictate where lines will go. I create these formulas and then follow them where they lead. I never know where they are going to go, really.”

She displayed a piece in process that still had certain points marked, as centers from which calculations could be made. “The centers are removed for the final work. Later, with some pieces, I’ll introduce an element of chaos,” she added, pointing to an area of one of her works that showed some abrupt density of form and color, but otherwise, seemed a part of the whole.

One of Linnéa’s installations was connected with a piece of performance art, in which the performance artist meditated for several hours near the visual work in progress and wore biometric devices that converted her breathing rate, pulse, and brain activity into mathematical information. Linnéa then translated that data into further work on the visual piece, which in turn affected the next round of meditation.

The evolutionary/interactive nature of the project was obvious; while everyone absorbed it, no one remarked upon it.

A striking moment occurred when Linnéa clicked to the next slide, and a familiar set of patterns appeared. We had seen them earlier that morning, on one of Cal’s LIDAR images. One tends not to think of retreating glaciers as following formulas, but there it was.

Across separations of time, media, scale, and—most of all—intentionality, painter and glacier seemed to have stumbled upon the same set of formulas.

It was the beginning of what would become a set of powerful resonances throughout the weekend.

Stuart Scadron-Wattles has at various times been a director, a playwright, an actor, and essayist, and still is a bit more trouble than he is worth. He is currently the director of resource development for Image.

Linnéa Spransy will be leading the painting seminar at Image’s Glen West Workshop this summer.

January 30, 2014 The Second Coming of Flannery O’Connor
Recent Comments
1 Comment | Leave a Comment
Browse Our Archives
get the latest from
Catholic
Sign up for our newsletter
POPULAR AT PATHEOS Catholic
1