A Blaze of Holy Unease, Part 2 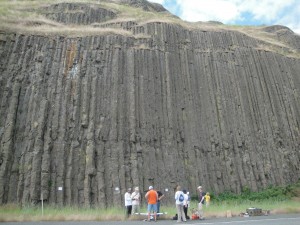 Pierre Teilhard de Chardin saw creation as dynamic in matter and spirit, and understood the world and specifically human consciousness as continually evolving. He believed creation to be the process of divine incarnation, all of the world perpetually moving toward God. The process was not and could not yet be complete. As a result “nothing is profane here below for those who have eyes to see.” All is sacred.

In Chardin’s Mass of the World, written in the vast expanses of the Inner Mongolian Ordos Desert, he prays: “the offering you really want, the offering you mysteriously need every day to appease your hunger, to slake your thirst is nothing less than the growth of the world borne ever onwards in the stream of universal becoming.”

God is no passive player, as Chardin writes in The Divine Milieu:“God truly waits for us in all things, unless indeed he advances to meet us.”

“The world is charged with the grandeur of God,” goes the poem by Gerard Manley Hopkins, a Jesuit in the century before Chardin. I imagine the world is filled with more dimensions and ways to understand it than we could begin to hold in our mind at one time, or even one lifetime.

Chardin saw that grandeur shimmering in every layer of his excavations of Peking Man; each piece he discerned with a worldview which seems increasingly contemporary. He saw in all things a “luminosity and fragrance which suffuse the universe” all moving toward what he called the noosphere, or one ultimate intelligence in God. “Throughout my whole life,” he wrote, “the world has been gradually lighting up and blazing before my eyes until it has come to surround me, entirely lit up from within.”

Chardin’s ideas drew on centuries-old wisdom in his understanding of God and creation. In the seventh century, theologian Maximus the Confessor said, “God the divine logos wishes to effect the mystery of his creation always and in all things.” He also said “the purpose of creation from the beginning was deification.” In other words, God is becoming incarnate in all of us, and in all things.

Webb suggests this dynamic understanding woven throughout Christian understanding and history is the “fulfillment of God’s call to Israel to live in son-ship.”

I agree with Burnet about the mountains. The hills falling away from my overburdened Prius and the two mountain passes yet to come bring me as close to God as does church. I see the reflection of my boys in the rearview mirror, both sleeping soundly as we cover the miles, and consider how much my understanding of the world has changed as I’ve lived into the experience of motherhood. I like to think it’s a bit more gentle, and much more full of awe. I like to think that my views have evolved.

The theory of the Missoula Floods carving the square and butted canyons of eastern Washington’s Channeled Scablands over a 2000-year period has only somewhat recently been accepted. J. Harlan Bretz, a geologist at the University of Washington, developed the theory in the early twentieth century after analyzing the unusual geology of the eastern part of the state and finding that the landforms did not fit the models of glacial erosion, instead suggesting a massive quantity of moving water.

The floods, he suggested, occurred repeatedly when the ice dam on glacial Lake Missoula was breached, releasing surges of water with speeds up to 80 mph and volume at nine cubic miles per hour, a flow greater than ten times the force of all the rivers of the world combined. That’s change worth being afraid of.

Bretz’s theories were ridiculed by the geologic community. He continued his work and the evidence mounted with the discovery of beaches in the mountains of Missoula, Montana, the edges of an ancient lake that covered most of the western part of the state. At the end of Bretz’s life, his explanation of the Missoula Floods was finally accepted.

Imagine commitment that demands your life work of exploration and discovery. Imagine the holy unease.

“The heavens declare the glory of God; and the firmament shows His handiwork,” says the psalmist. Both the scriptures and creation alike call us—are given us— to explore and probe, ponder and discover, a process that will at times scour and reshape what we know. What wonders might be ahead?

Through the cracked windshield of the Prius the mountains rise again and I see a deer peer out of the forest on the side of the highway as I make my way back to the city. There are no easy answers to chaos. “The immense hazard and the immense blindness of the world,” Dillard reports Chardin as writing, “are only an illusion.” I consider his prayer in his Mass Of the World: “that in every creature I may discover and sense you, I beg you: give me faith.”

February 12, 2014 God’s Grandeur
Recent Comments
2 Comments | Leave a Comment
""Aural" refers to hearing, "visual" to seeing"
merphd The Gutenberg Imagination
""It doesn’t matter when you start the Sinatra Christmas playlist or put up your tree. ..."
C_Alan_Nault How to Win the War on ..."
"Yup."
Max Marvel Finding My Inner Calamity Jane
"I an confused by the use of "aural" here: "In The Gutenberg Galaxy, he explained ..."
William G II The Gutenberg Imagination
Browse Our Archives
get the latest from
Catholic
Sign up for our newsletter
POPULAR AT PATHEOS Catholic
1