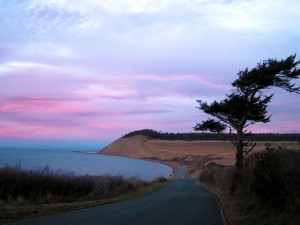 I’m up at 5:30 in the morning, packing, then gazing out the window at Whidbey Island as I wait for a pick-up. Wind rattles the cold panes. Behind me, a fire flares in the fireplace. This weekend I have been staying at Camp Casey, a WWII military base, now home to birds and a herd of black-tailed deer.

A gathering of painters, composers, theologians, environmentalists, and poets from all over the country has spent the last two days, meeting here around the clock. We have shared our art with one another and considered, in this wild place, the predicament we have in common as citizens of the earth. We know beyond any doubt that we humans have damaged the planet. Polar ice is melting. The earth’s climate zones are suddenly shifting. Weather is veering toward violence. Sea levels are rising.

This is a scandal. It has happened on our watch.

We have spent hours talking about the central questions. After all, how was this planet created?  Evolution and the tenets of our faith, we agreed, are entirely compatible. We weighed the facts. Scientists and theologians, both, have written powerfully about their amazement at the record of the universe, about life on this planet. They see no conflict between their faith in God and the evidence for evolution.

We moved on to think about how, as people of faith, we are meant to be the custodians of nature. After all, in one of the earliest stories in Genesis, God commanded our parents, Adam and Eve, to husband the earth. Consider the countless different shapes of leaves, the ingenious lives of animals, the endless hues and sounds of water.

This is what we are destroying, we realized: God’s creation.

To examine the creation more closely, we pulled on our jackets and traipsed outside. In the gray November drizzle we hiked, partly to get some exercise, partly to discover “nature” on Whidbey Island. We picked up twigs. We examined animal tracks. We marveled at the flight of birds.

Meanwhile, I couldn’t help but think how strange the idea—that nature needs us to save it. After all, nature can be utterly intractable to us as individuals. It can kill. “Man against Nature,” as my ninth grade teacher used to say, is one of the three great overarching plots in fiction. I myself have faced rampaging rivers, alarming droughts, and the savage, beardy snowstorms of northern Minnesota.

Now, on the final day of the conference, the morning we are leaving, I am pondering what to make of our weekend. Outside, the streetlights have not yet flicked off. Pines loom black against the salmon-colored sky. On this island, just off Puget Sound, the sun is rising. I watch as the colors of the landscape modulate slowly, tantalizingly, relentlessly. A fiery ball finally emerges.

What a relief. The sun has come up. Again. Watching sunrise makes me feel complicit with God, who is figuring out how to create yet another day on earth.

And then—like a gift—I think about Gerard Manley Hopkins, a young teacher of Latin and Greek, who sat down a hundred years ago to write about this, perhaps more brilliantly than anyone else before or since. Long before modern science had nailed the evidence that we are destroying the planet, he set out the problem: “All is bleared,” he wrote, “all is smeared.”

And he formulated a tentative solution. Maybe there’s hope, he suggested, because the Holy Spirit endlessly regenerates life. Although light fades in the west, “Morning at the brown brink eastward springs.”

I stood at the window, watching it happen. God’s creation is not finished. It goes on. Every morning it is renewed.

For all we humans do to degrade nature, Hopkins wrote, “nature is never spent.”  He ends his poem: “the Holy Ghost over the bent/ World broods with warm breast and with ah! Bright wings.”

To put it simply, if we are willing to halt our damage, God can heal what we have already destroyed. There is hope, but the outcome depends on us.

The world is charged with the grandeur of God.

It will flame out, like shining from shook foil;

It gathers to a greatness, like the ooze of oil

Crushed. Why do men then now not reck his rod?

And wears man’s smudge and shares man’s smell: the soil

Is bare now, nor can foot feel, being shod.

And for all this, nature is never spent;

There lives the dearest freshness deep down things;

And though the last lights off the black West went

Because the Holy Ghost over the bent

World broods with warm breast and with ah! bright wings.

Gerard Manley Hopkins, who so brilliantly predicted our contemporary dilemma, died before any of us were born. He spent his life as a Jesuit, tutoring early university students. He published very little during his lifetime, but his poetry is now considered among the most significant of his era. It is easy to see why.

Thinking about his sonnet as we drive toward the SeaTac Airport, I renew my commitment to restore and nurture God’s creation in whatever way I can.

Jeanne Murray Walker’s most recent book is The Geography of Memory. She heads the Creative Writing concentration at The University of Delaware and serves as a Poetry Mentor in Seattle Pacific University’s MFA Program.