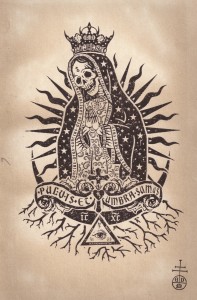 I got a call from a number I didn’t recognize. The voice was low, lifeless. He just got out of jail, and the guys in there told him to call me.

I function as a volunteer chaplain in Washington State’s Skagit County Jail, and I’m the closest thing to a pastor most gang members in my valley have known. Jail-tier referrals like these are how my tiny congregation grows.

The next day, I picked this new guy up and we sat at my kitchen table.

Danny was a quiet young man. He grabbed a coffee cup with a hand that had skeleton bones tattooed over his fingers, up over his wrist. A ghastly ink mural of a wide-mouthed skull poured out from his throat, darkening most of his neck.

He wanted help getting off heroin, he said. He heard we at Tierra Nueva Ministries help guys get a job sometimes, and that we do a spiritual drug recovery program. He wanted…”I don’t know…prayer, I guess. Right?”

So we prayed. I held his skull hands in mine. It wasn’t much of a leap: I asked if he’d ever given himself over to the power of Death.

“Uh…yeah,” he said solemnly and stared me in the eye, like we were finally getting down to business.

Maybe you’ve never heard of Santa Muerte, or Saint Death. If not, you will soon. The cult of Death is exploding along the US-Mexico Border, where our nation’s addictions meet another nation’s economy, where drug cartels preside over the chaos. It is a social landscape of violence, treachery, blood, cadavers appearing in trash bins and soccer fields. No one is safe.

Many, then, seek protection from the all-powerful spirit of Death.

This—more than a trend, more than a tattoo and T-shirt fad—has spread both north and south, into most of our communities, especially in the criminal underworld.

More and more suffering generations are seeing that if there were a spiritual power reigning in the world, it would be Death. Everyone, after all, dies in the end. Death wins.

Danny told me he started with a candle, lighting it by a statue of Saint Death with the world in one hand and a scythe in the other. He became less afraid, he said. Then his friend helped him get more serious. Offering gifts. Fruits. Then blood, chickens. “That’s where the power is at.”

Maybe you think it’s hocus pocus, superstitious and retrograde stuff. But think: young people go to heroin not because it’s a placebo, a cool idea, but because it has actual power to do something, to take away pain. Similarly, humans for centuries have discovered palpable power in blood currency. They see results.

The practice is growing.

You don’t have to go to the cartel-run cities on the Border to see the power of Death at work. People are seeing relationships rot and end. Promises broken. Disease and development ravage families and neighborhoods. Men go to prison, and are often forgotten more than the dead. They are facing the powers of Death. And this is one way to reckon with it. Joining it.

As I held Danny’s cold hands, I wondered what our prayers, what our Christian faith, has to say to the cult of Santa Muerte.

A few days earlier, I’d returned from a three-day retreat to an Orthodox monastery. I’d been reading along these lines, reaching back into the roots of the faith and mystery of Jesus.

The monks in black robes and gnarly beards around me had bowed and recited an ancient liturgy; one I found when I bought my first-ever prayer book. I’ve been reading the prayers for this season of Lent.

This holy week we face our mortality as Jesus travels towards Jerusalem, where he will be arrested, betrayed, abandoned, and tortured. Left to cry and bleed on a cross atop a barren place called The Skull.

The cross, scattered across Jesus’s landscape, was a sign of Rome’s sovereign power: mess with us, and you die.

The cult of violence embodied by Rome seemed to be dominant. Many people of Israel joined Rome. The tax collectors in Jesus’s time—as hated as cartel bosses or drug dealers today—had this same logic: Rome wins, so might as well get its protection.

Jesus did not deny this power with pie-in-in-the-sky spirituality. Nor did he bow to it. He took it on.

This is how the Orthodox Church has celebrated the shock of Jesus’s resurrection, chanting loudly:

Christ is risen from the dead,
By death he hath trampled down death,
And on those in the graves
He hath bestowed life!

This cry was fresh in my mind as Danny and I spoke at my kitchen table.
The rare victory of Christ over Death is not obvious everywhere. It is still an existential rebellion, a resistance inaugurated two thousand years ago. Traditional icons depict the busted gates of hell beneath Christ’s feet.

Holding Danny’s hands, I got excited about Easter, about joining Jesus’s victory over Death’s apparent sovereignty.
Danny took a deep breath and renounced his pacts with Death. His lips tightened as we prayed, hearing words of love, of hope.

In the end, he was eager to begin Genesis Process, the drug recovery program we offer: weeks of going into the dead places inside. It can be an uncomfortable experience, resurrection: becoming un-numb, feeling again, facing the pain, facing our greatest fears, trusting that Jesus can bring new life as the tomb inside opens wide.

Join me in celebrating the cosmic event of Jesus’s “trampling down Death”—as the cult of bowing to Death grows around us.

Maybe Death does not win.

Chris Hoke is a jail chaplain and gang pastor in Washington State’s Skagit Valley, on staff at Tierra Nueva Ministries. His first book, WANTED: A Spiritual Pursuit Through the Jail, Among Outlaws, and Across Borders, is due out in February 2015 by Harper One. www.chris-hoke.com.

April 21, 2014 An Hour Upon the Stage
Recent Comments
1 Comment | Leave a Comment
Browse Our Archives
Related posts from Good Letters