Escape from the Holy Land, Part 1 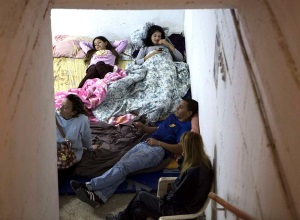 On a Friday morning in mid July, I entered Ben Gurion Airport in quite a different manner than when I exited it upon my arrival six weeks previously: by running for a bomb shelter.

Back in early June I stepped outside the glass doors and into Israel for the first time, my first photo a snapshot of the airport control tower ablaze against the rising sun because…well…I don’t know—there was nothing else to shoot and I had to mark the epic moment!

Six weeks later outside those same doors, I didn’t understand at first why others were allowed to run for the entrance after I had been stopped for a random security check—until I understood that all the chaotic Hebrew amounted to the equivalent of an air siren. So in I ran and took shelter in a stairwell among other passengers, ticket agents, and janitors, this being my last act in Israel.

Make that my second to last act, my last one being a second sheltering before boarding the plane. I was finally airborne and high out over the Mediterranean when I read in The Jerusalem Post that Hamas had just announced its intentions to start targeting Ben Gurion Airport.

Perhaps that moment with the newspaper at 33,000 feet would have made for a proper epilogue in the kind of TV show I’d just been to Israel to help finish writing as filming began. But to the contrary, it was all too real a cliffhanger: my wife and three kids were still on the ground with friends in Galilee, scheduled to fly out a full eleven hours after me.

Having decided to cut our travels short before the conflagration grew any worse, we had to fly home separately because of different bookings and limited availability in the growing exodus—I on my own, she most definitely not.

The nightmarish reversal of the “women and children first” dictum had only just begun.

At the start of my trip in early June it is, in some sense, my escape to the Holy Land: my long-awaited first visit to Israel that will finally set me free from the confines of my capacity to imagine the place and put me on the ground there.

This venture will lift me from the daily grind at home and plant me in the Holy Land for work: five weeks as a writer/producer on Dig, a new USA drama airing this fall about the FBI investigation of an American archaeologist’s murder in Jerusalem that uncovers a larger plot with global ramifications. The first American production of its kind both set and shot in Israel, Dig is the find of a lifetime to afford me this opportunity.

How can I not feel that way when entering Jerusalem for the first time at sunset in early June, and rounding the corner I see the half-shadowed Mt. of Olives to my left, the Temple Mount to my right, with our production trailers camped squarely on the narrow road between?

Running down the coast from my Tel Aviv hotel to the port of Old Jaffa the very next morning, my destination is the harbor known as Joppa in Old Testament times where Jonah, the ill-tempered prophet, fled the call of God on a ship bound for Tarshish. While I can’t digress here on the story’s formative role in my life, suffice it to say that not only did my wife and I use Jonah’s prayer inside the belly of the whale as one of the readings at our wedding (probably much to the confusion of many guests), our rings are inscribed with a partial verse from it: “and he answered me.”

Running along the promenade on my way back from Jaffa, I exhale that phrase with almost every other breath. Here I am in Israel in the most unexpected fashion, to be joined in late June by my family for two weeks of travel once my job is done.

Just before my wife and kids arrive, the bodies of the three Israeli yeshiva students abducted in the interim are found in a field outside Hebron. Within a few days a Palestinian teenager is burned alive in the Jerusalem forest to satisfy the retaliatory price tag of vengeance.

The war drums are growing louder with each passing day, and my mother is already nervous before the first rockets are fired by Hamas.

Rightfully so, as it will turn out soon enough, despite my initial reassurances that we are not in harm’s way. I reassure my mother that our itinerary will keep us a long way from Gaza and that the short-range rockets, after the initial salvos, don’t seem to stand a chance against the Iron Dome anyway.

But then the long-range rockets are unleashed as Hamas ups the ante in response to Israel’s unrelenting airstrikes. Tel Aviv is within easy reach, as are the western outskirts of Jerusalem. Even Haifa further north falls prey to sirens warning of attack. With fifteen to ninety seconds to reach a bomb shelter depending on where one is in the country, suddenly nowhere is safe.

Twelve hours after takeoff from Tel Aviv, I am back in New York and about to face fears that dwarf any concerns I had on the ground in Israel.

To be continued tomorrow

August 12, 2014 Escape from the Holy Land, Part 2
Recent Comments
0 | Leave a Comment
""It doesn’t matter when you start the Sinatra Christmas playlist or put up your tree. ..."
C_Alan_Nault How to Win the War on ..."
"Yup."
Max Marvel Finding My Inner Calamity Jane
"I an confused by the use of "aural" here: "In The Gutenberg Galaxy, he explained ..."
William G II The Gutenberg Imagination
"My friend is looking for a Pepper Smith he served in the army with, was ..."
Christine Budnack The Love Song of Pepper Smith
Browse Our Archives
Follow Us!

Steve Skojec: Pope Francis is a Two-Faced Liar...
Folks, this is an absolutely classic, playbook example of what I have...
view all Catholic blogs
What Are Your Thoughts?leave a comment
Copyright 2008-2017, Patheos. All rights reserved.