We Who Are Left Behind 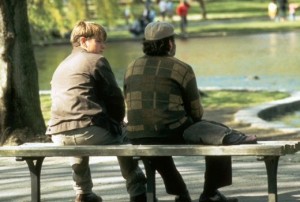 “Why’d you let go?” Conrad Jarrett shouts at the ceiling, in a climactic scene in Ordinary People. Conrad’s family has unraveled after a boating accident took his older brother, and after his own attempted suicide. In flashbacks we see the Jarrett boys gripping a rope slung across their storm-tossed, capsized sailboat. Conrad’s brother loses hold, is swallowed by the water.

Conrad’s psychiatrist elicits from him the truth beneath his survivor’s guilt, which is that he is angry. Angry his brother didn’t head for shelter sooner. Angry he couldn’t hang on. “Did it ever occur to you,” asks his psychiatrist, “that you might have been stronger?”

Seventeen years after Ordinary People garnered four Oscars, Robin Williams received an Oscar for his role in Good Will Hunting, as a psychiatrist much like the one played by Judd Hirsch in Ordinary People. In a similarly dramatic counseling scene, Williams helps the film’s protagonist find the beginning of peace.

It’s an odd sort of game, given that none of us has ever killed himself. Not a one of us knows the thoughts of a person squeezing the last of his life like toothpaste from its tube. None of us knows whether crossing death’s threshold brings with it regret, or terror, or satisfaction, or indifference.

We only know how we feel when we are left behind, and how we feel about how other people feel. A corpse represents an opportunity for righteousness, and so people fight over the body of Robin Williams, denouncing one another as insensitive, or coddling, or whatever is the opposite of what they imagine their own noble sensibilities on this matter to be.

There was a time when Christians treated suicide harshly, as a rebellion against God, a form of destruction of Christ, insofar as the Church considered all people icons. For centuries, suicides were often refused funeral services. Sometimes their bodies were desecrated. That such abominations were committed in the name of Christ likely made them harder for families to bear.

Because let’s be clear, it’s the ones left behind who pay. The one who took his own life has departed this present misery. He is beyond our reach. Herein lies the grief and the fury, for those who remain.

Robin Williams left behind a wife and three children. Their business with him is their business, their feelings are solely and justly their own. We can try to muster sympathy, and those who have experienced something similar can conjure empathy, but here is the very real truth of things: in days we will begin to forget, and in weeks we will only remember Robin Williams on rare occasion.

Will there be a day his family forgets him? A day they do not wonder if they might have done their parts better?

Months after my mother died, her sister called the coroner. Then she spread word that my mother had overdosed. My mother always felt like her sister judged her. Perhaps she was right.

I’ve intended for months to clear this up, but I’m afraid to call the coroner. My mother suffered her entire life from depression. The heart’s pain is a weight and some days the weight presses you onto your bed so brutally that you can’t get up, and if you’ve never lain in bed for days, dreading the sight of people, ashamed that you haven’t the will to rise, straining to find the courage, then you don’t understand what depression really is.

I don’t know if my mother was pulled beneath the waves because it was her time, or if she let go. I don’t know if I might have stretched my hand across the hull and saved her.

She told me once that when I was a little boy, I was her only companion. I remember watching Mork and Mindy with her, she laughing at Robin Williams’s antics in spite of herself, and me with her, and we gripping the hull-stretched rope, not knowing that we were already in the water, that we are, all of us, in the water and clinging to this life. We hope those we love will hold on, and sometimes we even pray, but it doesn’t feel like it’s enough, because no matter how much we hope and how much we pray, they slip beneath the waves one after another, and our turn is coming.

And what happens, when my hand slips, when yours slips? I suppose that’s between each of us and a God whose judgment is at once more piercing—and more grace-filled—than our own.

So there is neither sense nor charity in judging—for good or for ill—someone who kills himself. “There is one Lawgiver,” wrote James, “who is able to save and to destroy. Who are you to judge another?” Far more useful than our judgment is prayer, for all who suffer in darkness, and for those left behind who wonder: Why’d you let go?

August 26, 2014 Lessons of The Giver
Recent Comments
0 | Leave a Comment
""It doesn’t matter when you start the Sinatra Christmas playlist or put up your tree. ..."
C_Alan_Nault How to Win the War on ..."
"Yup."
Max Marvel Finding My Inner Calamity Jane
"I an confused by the use of "aural" here: "In The Gutenberg Galaxy, he explained ..."
William G II The Gutenberg Imagination
"My friend is looking for a Pepper Smith he served in the army with, was ..."
Christine Budnack The Love Song of Pepper Smith
Browse Our Archives
Follow Us!