Jesus and the Junkie in My Car

Jesus and the Junkie in My Car September 29, 2014 Morgan Meis 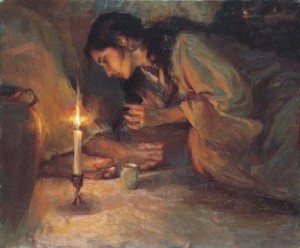 You learn a lot about your neighborhood when you drive a junkie from the laundromat to the homeless shelter in the next town over. You learn, for instance, that the red house on the corner across from the pizza joint is owned by a man who has a serious crack habit and (though you must take this next part of the story with a large grain of salt) owes the junkie in your car a good deal of money.

You learn there are people who linger behind the abandoned mini-market after the sun goes down. You learn what they’ve been doing there. You learn about the people who’ve recently been arrested in your town and why they have been arrested.

You learn some of the backstories about the three men who were tied up, shot in the head, and dumped into the river a few weeks ago. You hear crazy stories about fights and betrayals and big plans. You hear wild claims and self-justifications that spiral off into so many tangents that, suddenly, you’ve entered a Thomas Pynchon novel.

And then a thought creeps into the back of your mind, the thought that God loves this man. God loves all men equally, of course. It is a big love. But, God loves this man especially. Or perhaps a better way to put it is that God has a special interest in men like this, the junkie, whom we ought to call David, since that is his name.

There is a story in the Gospel of Luke. Jesus goes to have dinner with “a certain Pharisee,” named Simon. When Jesus arrives at the house of Simon the Pharisee, a woman is waiting there for him. She immediately gets down to business, kneeling behind Jesus and bathing his feet with her tears, wiping the tears away with her hair. You know this type of behavior.

The scene produces discomfort in the house of Simon. The woman is oblivious. She is preoccupied with kissing Jesus’s feet, crying, anointing his feet with ointment. For those few minutes, she’s got Jesus’s feet all to herself and no one is going to take them away from her.

Simon thinks to himself, “I wonder why this purported prophet is letting this woman have at his feet with such abandon? She is, after all, a woman we all know has been up to no good.”

Jesus senses the question in Simon’s mind. He says to Simon, “Hey Simon, if two men owed another man money, which one would be more grateful to have the debt forgiven: The one who owed a ton of money, or the one who only owed a few bucks?”

“That’s an easy one,” says Simon, “The one who owed a ton of money would be much more grateful.”

“Well,” says Jesus, “that’s why this woman is down on her knees kissing my feet and wiping tears away with her hair while you’re standing there aloof and critical.”

“The one to whom little is forgiven,” Jesus continues, “loves little.”

If you think about it, this is an incredible thing for Jesus to have said. He is saying that only great sinners experience great love. The thought is so incredible that most of the time we turn it into something else.

Take Pope Benedict XVI, a serious scholar of the Bible and sharp analytical mind. Commenting on this story from Luke, Pope Benedict wrote, “The message that shines from this Gospel passage is eloquent: God forgives all to those who love much.”

This is a lovely thought, and a thought that surely emerges from the Gospels in many places. But it is the exact opposite of what Jesus says to Simon the Pharisee about the foot-anointing woman. Jesus says, “So I tell you, her many sins have been forgiven, hence, she has shown great love.”

Notice the “hence.” Her great love comes second. Jesus is not saying that her great love caused her to be forgiven. He is saying that the fact that she’s been forgiven has caused in her a great love. Benedict changed the story around because he wants the story to operate with a clearer and more distinct moral message.

You’ve got to love a lot, claims Benedict, and then you will be forgiven. But Jesus’s story says nothing about what causes the forgiveness. In the parable, we aren’t told why the man forgives the debt of the other two men. He just does it.

The result of this forgiveness is that the man with much debt is made extremely grateful, and the man with lesser debt is made less grateful. And this, presumably, is why Jesus and his father are loved so deeply by, and therefore pay such special attention to, the sinners. Sinners are like a cash crop when it comes to reaping love.

Since God is love, sinners would seem, oddly enough, to be somewhere near the center of God’s cosmic economy.

There are plenty of places in the Gospels and in the sayings of Jesus where we can learn how we ought to behave. But in this case, in the story of the woman and the washing and anointing of Jesus’s feet, we get more of a fact than a message.

“How interesting,” Jesus seems to be saying, “that the great lovers are the greatly fallen ones.” Note also that Jesus does not directly rebuke Simon. Jesus simply notes that the woman at his feet loves him more than Simon does.

It is greatly exasperating and greatly tiring to talk with an active junkie named David for forty-five minutes on a drive along country roads. There is great pain, great suffering, so many delusions, and so much self-destruction in what he has to say.

But how strange, also, to know that this man is a vast storehouse of potential love. Great love.

September 30, 2014 In a Domain of Sheep, He was a Lion:
Tributes to D.G. Myers from Friends & Colleagues
Recent Comments
0 | Leave a Comment
Browse Our Archives
get the latest from
Catholic
Sign up for our newsletter
POPULAR AT PATHEOS Catholic
1