Fury: The Beautification of Violence? 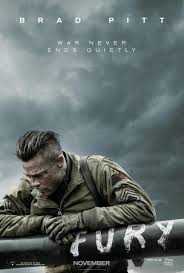 I loathe violent movies. When my husband watches them at home, I escape to another room or ask him to change the channel. This has been especially true since our son died a violent suicide death. I don’t want to see blood and guts. Death is too real and broken bodies are too precious for me to want to consume them as entertainment, or be confronted with them in art.

So it was with considerable trepidation that I attended a screening of the new World War II flick, Fury. I had heard that the film is brutal. It is.

But it’s also that rare breed in which the violence is necessary. This may seem obvious given that it’s about war, but other war movies revel in lingering scenes of carnage. Aside from one grotesque sequence, this film never does.

The brutality of war is what Fury is all about—how the erasure of one’s humanity is essential to a soldier’s and his or her comrades’ survival—and how that humanity remains invaluable, even to men who’ve buried it.

The story spans the course of one day, in which a seasoned tank gunner is killed and replaced by a fresh-faced boy, Norman Ellison (Logan Lerma). Sgt. Don “Wardaddy” Collier (Brad Pitt) mercilessly forces the boy to harden himself against the enemy, but once the boy does and a German village is captured, Wardaddy spots a beautiful woman in a window and takes the boy upstairs while the three other members of their tank crew go about their bawdy reverie.

The woman and her young cousin are rightly terrified, but quickly learn there is no need to be. Wardaddy wants to wash up and eat a decent meal. Norman and the girl, Emma (Alicia von Rittberg),play piano together and Wardaddy encourages them to rendezvous in the bedroom. When the aunt protests, Wardaddy tells her to let them go, saying, “They’re young and they’re alive.”

Eventually the rest of the company—Boyd Swan (Shia LaBeouf), Grady Travis (Jon Bernthal), and Trini Garcia (Michael Pena)—come looking for their leader. The men are angry at his retreat into a fiction of normalcy and set about destroying it. Where all was grace and light, they represent everything that isn’t. And yet, as one of the men begins to recall a particularly horrific battle they’d fought together, a tear runs down Shia La Beouf’s familiar face.

As much as these warriors try to ignore their own humanity, there it is bubbling to the surface—something to be grieved over, not indulged.

Kenneth R. Morefield, at Christianity Today, described the sexual encounter in this scene as a form of rape and said the domestic interlude “doesn’t work.” I disagree, and found it to be both profoundly moving and essential to the story.

At The Hollywood Reporter, Todd McCarthy described it as a one-act play “that addresses the damage—psychological, emotional and physical—that war causes beyond the immediate casualties of battle.”

I agree. It beautifully encapsulates the film’s primary themes, and without this interlude, I suspect this film would be just another romp through the battlefields of World War II. Without it, the violence would have no counterpoint.

Soon after The Passion of the Christ came out, my late journalism mentor Richard D. Heffner, (who was chairman of the Motion Picture Association of America rating board for twenty years) told me he objected to the “beautification of violence” in the film. It was a trend he saw running through Mel Gibson’s work and it is a phrase that has stuck with me.

I ask myself sometimes, does this or that film beautify violence? In Django Unchained, a black superhero revenge fantasy that I unexpectedly loved, Quentin Tarantino does beautify violence. Having never seen his other odes to bloodlust, I hadn’t intended to see this one, until I read Anthea Butler’s review of it at “The Grio.” Here’s what she said:

“Django is a particular depiction of slavery that tugs at the memory of the so-called ‘peculiar institution.’ That memory is tainted by a particular fantasy: that vengeance is satisfying, and heroes are always cowboys. The memory he gets completely right is the violence of slavery.”

Butler said Django’s heroics resonated with everyone in the Texas theater where she saw it, even white people. “The cost however, was the acceptance of the bullets, blood and gore, an often-romanticized part of the history of America.

Sometimes even when violence is beautified, it can satisfy some visceral, collective need. But rarely, and at a steep price. I’ve never been entirely comfortable with my love for that film. I didn’t love Fury, but I also don’t feel guilty about liking it, because it does not beautify violence.

When Wardaddy takes his men into its climactic, suicidal and somewhat unbelievable ending, one could be tempted to think he is acting out of blood lust, but what I saw was a character who understood the cost of war and ultimately judged the fight worth waging for the greater good.

As a scripture-quoting apologist for the righteousness of their cause, Boyd offers one side of what, the film makes clear, has been a long-running argument between him and Wardaddy.

“Do you think Jesus loves Hitler?” Wardaddy taunts. “I’m the instrument, not the hand,” Boyd insists. It is only as death closes in that their debate is resolved, as the two men eloquently quote scripture to each other.

Likewise, the debate within myself rages. Is it worth it to allow a work of art to tap into my own traumatic memory, to potentially brutalize me? And so for me to say the violence in Fury is essential is no small thing.

Christine A. Scheller is a widely published journalist and essayist. She lives with her husband at the Jersey Shore and in Washington, D.C., where she helps facilitate dialogue between scientific and religious communities.

October 20, 2014
Hannah Graham and a Silence too Loud
Next Post