Inside Matisse’s Chapel of Cut-Outs 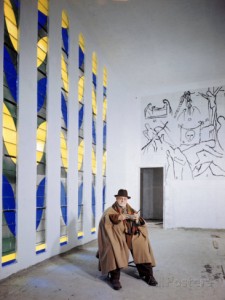 At the end of his life, Henri Matisse made art for a chapel. It was a strange thing for an atheist to do. That Matisse would make religious art was especially annoying to his friend Picasso. In one exchange, Picasso asked Matisse, sarcastically, why he didn’t just make art for a brothel.

“Because nobody asked me,” was Matisse’s reply.

You could take this answer as pure cynicism. The artist as gun for hire. “I make art wherever people pay me to make art. A church, a brothel, it doesn’t really matter.” Perhaps, in answering this way, Matisse was playing the tough guy in front of his friend and sometimes rival.

But there is another way to read Matisse’s answer. It is to take seriously that the asking matters. Matisse was asked to make art for a chapel, not for a brothel. He was—to raise the tempo of the language—called to do it.

Matisse seems to have seen it that way too. He always called the chapel his “masterpiece.” He said he was “fated” to do the work.

It all happened because of a young woman who later became a nun. Matisse met her after putting out an ad in the paper for a “young and pretty” nurse to take care of him in his sickness and old age. The result was Monique Bourgeois.

Bourgeois nursed Matisse for a couple of years and then entered a convent in a town called Vence in the south of France. A few years after that, Matisse bought a house near Vence. Matisse always felt drawn to southern France. But he was drawn to the young nun as well.

Bourgeois asked him to help design a chapel being built by the Dominicans.  Matisse complied. He worked on the architectural plans, created stained glass, and made drawings for the Stations of the Cross. He even designed vestments for the priests who would stand at the altar.

I’ve never been to the Chapelle du Rosaire de Vence. But I have been inside the chapel room that is part of Henri Matisse: The Cut-Outs, currently on exhibit at the Museum of Modern Art in New York City. You do get some sense, in the museum, of what it must be like inside that chapel.

Suffice it to say, that old man Matisse knew something about sacred space after all.

Matisse always wanted to make art that could move and live, sing and dance. His Dance and Music paintings from around 1910 were his first real success in making visual art that could rival dancing and music-making in vibrancy. Dance is as pure a statement of color in motion as painting has ever achieved. A circle of red human figures dance against a field of blue and green. Painting, here, becomes an act.

In the action and movement of the Dance and Music paintings are little clues as to why Matisse would eventually find himself making art for a chapel. Art, Matisse felt, has to do something. Art can’t be inert. Art can’t take its distance from the world, hanging on the wall in an empty aesthetic vacuum.

Art must be purposeful, as it is, for instance, in a chapel.

The chapel designs (especially the stained glass) would not have been possible without the cut-out technique Matisse developed later in his life. Matisse started with sheets of colored paper and a large pair of scissors. He’d cut out strips of paper in the shapes of people, plants, abstract designs, and then affix the colored paper directly to a background.

Matisse’s cut-outs tend to portray human beings in action: acrobats, circus performers, swimmers, and dancers. Or they portray natural forms, different kinds of plants growing and moving in the wind and water. The colors are always rich, always vibrant, always clanging against one another in startling contrasts. The cut-outs live.

But how, exactly, is art supposed to live in the modern world, the world within which it has no obvious place, no obvious role? Is visual art merely something nice to look at? Was art, after the nineteenth century, meant to serve primarily the needs of commerce? These were serious questions in 1910. They aren’t any less urgent today.

So, here is Matisse’s final odd contribution to the serious questions.

In the chapel, Matisse took some of the amusing plant squiggle designs from his cut-outs and used them for a stained glass called The Tree of Life. The squiggles are yellow against a deep blue background. The result is tense and calming at the same time, not unlike the tension of the crucifixion, in which a scene of a horrible death affirms, somehow, the eternality of life.

The priestly vestments—bright orange chasubles with streaks of yellow punctuated by the darkest black crosses—are made of paper. They are cut-outs to be worn during the act of worship. What does one worship in the chapel of cut-outs? Life, of course, which is to say God.

Here, art has come back into its own. It isn’t didactic. It isn’t art that has a specific religious bone to pick. Instead, it is art that is religious in its very bones.

October 20, 2014 Hannah Graham and a Silence too Loud
Recent Comments
0 | Leave a Comment
"Ah, so now the imaginary War on Xmas is transmogrified into The War on Santa, ..."
David Miller How to Win the War on ..."
""Aural" refers to hearing, "visual" to seeing"
merphd The Gutenberg Imagination
""It doesn’t matter when you start the Sinatra Christmas playlist or put up your tree. ..."
C_Alan_Nault How to Win the War on ..."
"Yup."
Max Marvel Finding My Inner Calamity Jane
Browse Our Archives
get the latest from
Catholic
Sign up for our newsletter
POPULAR AT PATHEOS Catholic
1