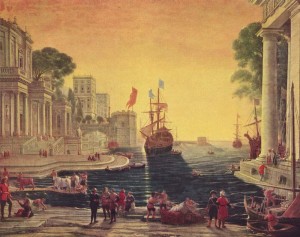 SA:  In your essay “Me and the Monotheists,” you say that even though you are a Hindu, many Christians seem to warmly welcome your poetry (e.g., I’ve included your poem “Incarnation” in the anthology Light Upon Light). You say this is primarily about “aesthetic resonance”—particularly with imagery—but you also point to the English language itself as being encoded with biblical influence.

And yet not every contemporary English-speaking poet writes this way. Can you elaborate?

AM: In most prose, each individual word is lightweight, and we experience less of its history, meaning, and power. So in that previous sentence, when I wrote the word word, it was not the Word that was in the beginning. If this were a poem, the medium itself would demand a higher concentration from you and me on the word word—as if it were capitalized (nouns used to be capitalized in early English writing all the time, as you know; they still are in German).

The word Word, used in a poem, would take on the totality of its meaning, history, and power, and the first lines of the Gospel of John would be, accordingly, inescapable. The only alternative strategy, to purge or forget word’s religious history in English, would be if I used the word word as it is used in prose, lightly. But this would be the equivalent of painting an orchid with no memory of O’Keefe, or writing a Nocturne for piano with no memory of Chopin.

It can be done. But you are stacking bricks on the empty space where a tradition should be, and everything falls through. In a well-built poem, every English word has a foundation, and that foundation is, very frequently, whether you like it or not, religious. Consider the noun disobedience. Or the noun rose. Or, to refer to the title of your excellent anthology: Light. In poetry, echoes give us substance.

SA:  It seems as though many contemporary writers are indeed trying to purge words of their “history, meaning, and power”—because these are perceived as exerting negative influence (patriarchal, colonialist, religiously bigoted, etc.).

Is it fair to say there are some histories, some meanings, some powers that are best forgotten or rewritten? Or is this simply impossible: what we gain in perceived freedom we lose in substance?

AM: Good question—very pertinent to the academic climate of the past few decades, where everything is interrogated for its congruence with modern social, moral, and political ideas.

I am by ethnicity an Indian, by religion a Hindu; the East India Company received its charter in the same year that Hamlet was first performed; and yet I love Shakespeare. Eliot and Larkin were anti-Semitic, but that is only the start of it.

All classical authors, and almost all authors worldwide before the nineteenth century movement to abolish the slave trade, were okay with human slavery. If talking-point-by-talking-point agreement with contemporary social and moral ideas is a precondition of literary value, then we should purge and discredit almost everybody, because slavery was everywhere for centuries, and few if any of these great writers were bothered by it.

Even Cervantes never spoke out against slavery, and he was a slave—for five years among the Turks.

Where do you start, where do you stop when you play the game of retrospective moral supremacy? I’d rather not play that game at all: It is too simple and there is no reward, only loss after loss after loss. For me, the most intelligent form of literary play is reading.

SA: You claim a number of classic poets like Shakespeare as influences. Are there any contemporary writers you find particularly compelling?

AM: From a religious and verbal perspective, Christian Wiman, clearly. He was one of the first editors ever to publish my work, back in 2005, which dovetails with your prior question. There are many other strong verbal talents out there, plenty of affecting writers, and interesting religious writers as well. But Wiman is a total writer in a way most others aren’t, collapsing verbal ingenuity, emotional power, and religious engagement into one art.

Like all the best religious poets, he has a personal and tumultuous relationship with his God. He does not write about God; he writes inside God.

SA:  What are you working on right now?

AM:  A biography of my six-year-old son, if you can believe that. He was born with a congenital heart defect, and he went through an epic medical and surgical odyssey from birth to age five. He is my epic hero, and I am going to sing his heroic exploits.

The book is also, and perhaps above all, a religious exploration. Because the question of how such a thing could befall him (or any of the thousands of newborns born into instant suffering every year) returns me, alas, to theodicy, and to the most perennially intractable questions of all. If I can explain this one thing to him, I can explain the universe to myself. Wish me luck.

SA: Indeed! What a journey. So is this where you get to practice your own concept of the epic art, what you describe in your essay “Epic Fail”?

You say that Virgil got it wrong, whereas Homer got it right: a true epic is not so much a sweeping narrative covering centuries, but a “single point of maximum narrative pressure.” Which is what a medical condition does to life, doesn’t it?

AM:  Perhaps I was a little harsh on Virgil—in the end, his work has lasted and retains power, which is more than any critic can say for his critique. I do agree about the epic power and epic concentration that illness grants to events. The whole past and potentially foreclosed future bear down on that one point.

Writing down the whole sequence of my son’s surgeries and complications, I was struck by the curious unity of his ordeal. What seemed and was experienced as episodic, in the manner of a romance (in which the hero overcomes peril after peril), became, as I wrote it down, more like an epic poem, in which the hero suffers all in order to attain a single desired endpoint: In his case, like Odysseus’s, a homecoming.

Sarah Arthur is the author or editor of nine books, including the literary guides to prayer from Paraclete Press: Light Upon Light: A Literary Guide to Prayer for Advent, Christmas, and Epiphany and At the Still Point: A Literary Guide to Prayer in Ordinary Time. She is a fun-loving presenter for events around the country, including the annual C. S. Lewis Festival in Northern Michigan and the Frederick Buechner Writer’s Workshop at Princeton Theological Seminary. Her website is www.saraharthur.com.

November 14, 2014 Apocatastasis at the Essex
Recent Comments
0 | Leave a Comment
Browse Our Archives
get the latest from
Catholic
Sign up for our newsletter
POPULAR AT PATHEOS Catholic
1