The Photographic Eye of God 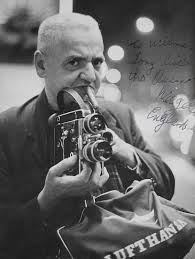 He called himself Weegee The Famous. Weegee, for short. His real name was Arthur Fellig. But even that wasn’t quite real. Born in a little town in what is now Ukraine in 1899, Weegee was originally named Ascher Fellig. He was a subject of the Austro-Hungarian Empire.

Ascher’s family immigrated to America in 1909, where he became Arthur.  In the 1930s, Arthur took up freelance photography, roaming the streets of his new home. That’s when he performed his third transforming act, into Weegee The Famous. No longer an Austro-Hungarian, he’d become a New Yorker.

There are competing stories about how and why Arthur (née Ascher) became Weegee. The most satisfying story is that Weegee is a phonetic form of Ouija. Weegee was so quick getting to the scene for a good photograph (often a crime scene), people started to say he was like a living Ouija board. He knew what was going to happen before it happened.

More than anything else, Weegee liked to photograph murder scenes. Asked what he did for a living, he would reply, “Murder is my business.” It is said that he photographed as many as five thousand dead bodies, murdered bodies, during his career as a photographer.

Weegee’s photos are hard to ignore. They go beyond their inherent sensationalism, beyond the pornography of the dead and dying. It is difficult to say exactly why.

In his essay “Uses of Photography,” John Berger quotes Susan Sontag from her book, On Photography:  “A photograph is not only an image (as a painting is an image), an interpretation of the real; it is also a trace, something directly stenciled off the real, like a footprint or a death mask.”

Reflecting on this quote, Berger goes on to say that a photograph is “a memento from a life being lived.” The uncanny effect of photography is in how it snatches a living instant. In being snatched, the moment is ripped out of its context and displayed as an absolute.

Weegee’s photographs are mementos snatched not from a life being lived, but from a life that has slammed shut. These people died in car crashes and shoot-outs. They died in violence that snatched them out of the midst of their own lives just like a photograph snatches an image from the flow of time.

Some of Weegee’s most arresting shots show a dead body on the street surrounded by cops and onlookers. Here, the camera has captured two forms of time overlapping in one picture. For the dead person, time has stopped or ceased to matter. For the onlookers, the death just witnessed is a moment (either of horror or indifference or something in between) that marks a spot in their ongoing lives.

How do those two forms of time fit together? How can one image capture both the end, and the ceaseless flow of time? There they are, inhabiting the very same frame, co-mingling in the infinite instant of the picture.

It doesn’t take John Berger very long—in his little essay about photography—to start talking about God. Berger remembers Daumier’s famous cartoon of the early French photographer, Nadar. Nadar is riding in a hot air balloon, photographing all the people in the city down below.

Berger asks: “Has the camera replaced the eye of God? The decline of religion corresponds with the rise of photography. Has the culture of capitalism telescoped God into photography?”

Perhaps this takes us back to the central importance of images. The problems and mysteries of images go back, after all, long before the invention of the camera. There are passages, I seem to remember, in the Bible.

The King James translation contains, rather early on, these unforgettable words— made more powerful by the repetition and Elizabethan grammar. “So God created man in his own image, in the image of God created he him; male and female created he them.”

The translators were correct to italicize “own.” Unpacking the full mystery of what it means to be created in God’s own image is the work of more than one lifetime, more than all lifetimes. But from the moment of man’s creation onward the pull toward images, the fascination with images, the danger of images has been constant.

One definition of humankind could be “the creature that looks at images,” or “the creature that makes images.” There is an entire Commandment given over to worrying about graven images and the idolatry that results from worshipping images for themselves.

Images are at the heart of the story between man and God.

So, maybe John Berger is right that the camera has something to do with the eye of God. The power of Weegee’s otherwise exploitative images is in the way that they telescope time for us, merging the finite and infinite just as it would be in the eye of God. The images seem to give us a glimpse of God’s seeing.

It is really just a photograph of a dead man in the street, his hat lying distressingly on the concrete nearby, a metal can filled with some sort of unidentifiable fruit in the foreground. By the next morning, the scene was cleaned up and returned to normal. But the power of the camera has left this trace for us, a fragment stenciled off the real and transcribed onto a more enduring form of memory. The dead man dies eternally, now.

November 7, 2014 The Jewish Roots of Christian Worship for Churchgoing Dummies
Recent Comments
0 | Leave a Comment
Browse Our Archives
get the latest from
Catholic
Sign up for our newsletter
POPULAR AT PATHEOS Catholic
1