The Ardent Whisper of God 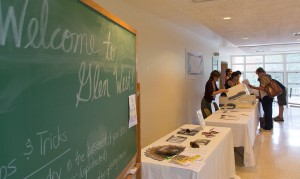 The following post is adapted from a talk given at the 2014 Glen Workshop in Santa Fe, New Mexico.

I came to the Glen Workshop while on sabbatical. For fourteen years, I’ve served as a minister to Mexican migrant workers, jail inmates, and addicts at the ministry of Tierra Nueva in Washington State.

The sabbatical was my chance to finally focus on writing, a lifelong passion that had gone dormant during the busy years of ministry. My inner voices told me that it was difficult to justify writing fiction when people are struggling and dying from addiction. Ministry updates became my primary genre. And testimonies. And grants.

But a novel about Baja California—a world of colonial missions, priests, soldiers, indigenous, pearl divers and saint-makers, the roguish and the devoted—lay dying in my drawer.

There were no triumphalistic testimonies in those pages. Instead, the pages were full of my questions. When the gospel comes in such a messy way, when people of love and good intention cause harm to the ones they are trying to save, where is God in all of that? In those pages, I was looking for God to show up.

I came to the Glen to find out whether the two very different selves inside me—the minister and the fiction writer—could be integrated. I’d reached a place of despair in trying and failing to reconcile those two callings. They were twins and rivals inside me, like Jacob and Esau.

One part, the ministry part, was favored, getting all my time and focus. The other part, the writer, was a bit like a neglected child who has to be tricky and belligerent to get any attention.

So I packed my notebooks and pens and introverted self into the car and drove from Washington to New Mexico. I came to the Glen for instruction. I had no idea that I would find such a beautiful community. At the Glen, I found a group who understood the nuance and beauty of Christian symbol, and how great literature written by people of faith slips good news under the door.

I sat with other writers in the hidden corners of the beautiful campus of St. John’s and we talked about our stories and cried about our characters—because they are the deeply broken people we see all around us, who hunger for grace and redemption and good news. We ourselves are hidden in those characters. The people we love are hidden in them. The addicts and inmates of Skagit County, Washington, somehow found their way into nineteenth century Baja California.

And God was showing up.

At the Glen, among other writers of faith, I heard a resounding affirmation to give weight to the artistic call. I felt the Lord impressing upon me a sense of urgency—an unction, a plea to view writing as equal to my call to minster to the poor and the marginalized.

When I returned home, I finally gave this neglected spiritual vocation its due. Along with ministry, writing fiction became a spiritual discipline. And I returned with a host of friends from around the country who are willing to continue the conversation with me. In our search for good news, we wrestle with the dark human story as Jacob wrestled with the angel, crying out, “I’ll not let you go until you bless me.”

Without the donors who provided scholarships, I could never have gone to the Glen. I’d like to say thank you, and tell you that the seeds you’ve sown are bearing fruit. The first chapter of my novel-in-progress will appear in Image this month.

Image has been a place for like-minded artists to meet, co-create, and discuss for the past 25 years. To support Image, click here.

A.N. Muia works with Tierra Nueva in Burlington, Washington, serving as a chaplain in the Skagit County Jail and directing homes for men and women in recovery from addiction.

December 24, 2014 Certain Poor Shepherds
Recent Comments
0 | Leave a Comment
Browse Our Archives
get the latest from
Catholic
Sign up for our newsletter
POPULAR AT PATHEOS Catholic
1

The McCarrick Report: The Venom of Viganò
THIS SERIES DEALS WITH SEXUAL ABUSE. PLEASE READ WITH CAUTION. AN INTRODUCTION...
view all Catholic blogs
What Are Your Thoughts?leave a comment
Copyright 2008-2020, Patheos. All rights reserved.