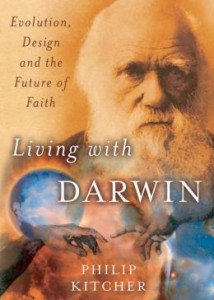 A few years ago, Philip Kitcher wrote a book called Living with Darwin: Evolution, Design, and the Future of Faith. Kitcher is a well-respected philosopher. He currently holds an appointment in the philosophy department at Columbia University.

Kitcher often writes about science, the scientific method, and more specifically about science and its clash with faith. He has dipped his toe, more than once, into the murky waters of creationism and the arguments around intelligent design.

I’ve never met Dr. Kitcher, but it is easy to tell from his writing that he is possessed of more in the way of patience and curiosity, intellectually speaking, than most intellectuals. As proof of this assertion, I submit a little story he tells in the preface of Living with Darwin. Flipping through a copy of TV Guide one day in the 1970s while babysitting his young son, Kitcher came across an advertisement for a book that claimed it would “set its readers straight on the question of ‘origins.’”

Now, here is what makes Kitcher uniquely himself, rather than your average philosopher of science. Kitcher filled out and mailed in the form attached to the advertisement. Soon after, he got a copy of Henry Morris’s The Remarkable Birth of Planet Earth. Henry Morris was, at the time, head of the Institute for Creation Research.

Philip Kitcher had become the proud owner of what he calls “a creationist classic.” Reading the book, Kitcher was startled to realize that, “there were objections to Darwinism to which [he] couldn’t immediately formulate a convincing answer.” This lit a fire under the nether parts of Dr. Kitcher, which he sought to extinguish by writing a clear, well-reasoned book that would formulate a convincing answer to any objections to Darwinism.

In a stern, though fair, admonishment to persons of faith who continue to argue along the lines of intelligent design, Kitcher writes:

Intelligent design-ers give Darwinians much trouble because their officially sanitized doctrine is presented with a wink. That wink signals to the sincerely religious that there is a faith-friendly alternative to godless evolutionism, and so recruits to the cause people who have no part in any pretense and no idea that they are supporting an illusion.

So, there we are. Darwin was right, and it is intellectually dishonest to wheedle with the facts of evolution. Life has evolved on this planet through a process of natural selection. Where that leaves us in respect to God is something people of faith are still working out.

According to Kitcher, the implications of Darwinism are pretty clear. The cruel and competitive story of evolution leaves no room for a providentialist God. You might be able to sustain some form of broadly construed spiritual pantheism. But that’s the most, Kitcher thinks, anyone could possible squeeze out of a planet operating under Darwin’s laws.

A problem for Kitcher, though, is why religion—which provides a false and misleading picture of the world—has emerged so universally among human beings. His answer is that “religious doctrines don’t have to be true to be successful.”

Turning his attention to Christianity in particular, he forwards a rough hypothesis as to why Christianity succeeded in the Greco-Roman world:

Statistics suggest that upper-middle-class pagan women were relatively more attracted by the religion—perhaps because they perceived the lives of their Christian counterparts as better than their own (that Christian husbands were more faithful and less abusive). An intriguing conjecture proposes that, in an urban world marked by filth and recurrent outbreaks of plague, the Christian injunction to comfort the sick would have raised survival rates in times of epidemic, simply because of the beneficial effects of giving water and other forms of basic care.

Kitcher is being reasonable and dispassionate here. A Deweyan pragmatist in his own philosophical commitments, Kitcher is at pains to recognize that Christianity and other religions do provide real-world benefits—from providing comfort to the sick and dying to the raising of survival rates during epidemics. Kitcher’s hope for the future is that we can get better at doing these same things without religion.

It is interesting, though, to think about that Christian injunction to care for the sick. In the famous Good Samaritan story from Luke’s Gospel, Jesus mentions nothing about raising survival rates. He talks, instead, about the necessity of love, that one must love God and that the love of God is manifested in the love of one’s neighbor: the neighbor being defined as any other human being who suffers, even a person otherwise defined as an enemy.

Kitcher reminds us, unintentionally, that the documents collected together in the New Testament contain very little in the way of metaphysical speculation—the nature of the deity, for instance, or solutions to the problems of theodicy. Jesus utters, all told, only meager and confusing fare when it comes to concrete God-talk.

Instead, he tells you how to be a disciple. And the fundamental attitude shift that is required in order to become a disciple is to act in love: comfort the sick, give someone water, administer basic care. As Kitcher intimates, these were not sentiments au courant within the Greco-Roman world.

So why the switch from Greco-Roman hardness of heart to Christian meekness? Was it the sudden collective desire to raise survival rates in times of epidemic? But where would this desire come from? Raising survival rates is a result, but it is not a motivation, especially since the result only came to be known after the fact.

There are Darwinian explanations for why altruism is beneficial for groups. But those explanations don’t touch on the first-person. They don’t step down into a human heart in the process of a genuine metanoia, a conversion from one way of living to another.

Metanoia is a fact of human experience, just as birth, growth, and death are facts. And from that fact we are carried back into the mysteries of faith: you, me, Darwin, Kitcher, everybody.

The photo above is the official cover of the book Living With Darwin (publisher Oxford University Press), reviewed here.

February 11, 2015 Hazel Motes Is Out of Time
Recent Comments
0 | Leave a Comment
""It doesn’t matter when you start the Sinatra Christmas playlist or put up your tree. ..."
C_Alan_Nault How to Win the War on ..."
"Yup."
Max Marvel Finding My Inner Calamity Jane
"I an confused by the use of "aural" here: "In The Gutenberg Galaxy, he explained ..."
William G II The Gutenberg Imagination
"My friend is looking for a Pepper Smith he served in the army with, was ..."
Christine Budnack The Love Song of Pepper Smith
Browse Our Archives
get the latest from
Catholic
Sign up for our newsletter
POPULAR AT PATHEOS Catholic
1