The Soul of the Law 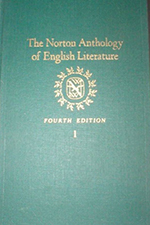 At the beginning of the old Norton Anthology of English Literature (4th Ed.) appeared this account from the medieval chronicler Gerald of Wales:

The Lord of Chateau-Roux in France maintained in the castle a man whose eyes he had formerly put out, but who, by long habit, recollected the ways of the castle, and the steps leading to the towers. Seizing an opportunity of revenge, and meditating the destruction of the youth, he fastened the inward doors of the castle, and took the only son and heir of the governor of the castle to the summit of a high tower, from whence he was seen with the utmost concern by the people beneath.

The father of the boy hastened thither, and, struck with terror, attempted by every possible means to procure the ransom of his son, but received for answer, that this could not be effected, but by the same mutilation of those lower parts, which he had likewise inflicted on him. The father, having in vain entreated mercy, at length assented, and caused a violent blow to be struck on his body; and the people around him cried out lamentably, as if he had suffered mutilation.

The blind man asked him where he felt the greatest pain? When he replied in his reins [kidneys], he declared it was false and prepared to precipitate the boy. A second blow was given, and the lord of the castle asserting that the greatest pains were at his heart, the blind man expressing his disbelief, again carried the boy to the summit of the tower.

The third time, however, the father, to save his son, really mutilated [castrated] himself; and when he exclaimed that the greatest pain was in his teeth; “It is true,” said he, “as a man who has had experience should be believed, and thou hast in part revenged my injuries. I shall meet death with more satisfaction, and thou shalt neither beget any other son, nor receive comfort from this.”

Then, precipitating himself and the boy from the summit of the tower, their limbs were broken, and both instantly expired. The knight ordered a monastery to be built on the spot for the soul of the boy, which is still extant, and called De Doloribus.

I submit that in this short recitation are the classic elements of a good story. There is initial motivation, complicating action, a contest of wits between a fully rounded protagonist and a well-developed antagonist, with the highest of goods at stake. Above all, the action reveals each man’s character, and we experience a mysterious catharsis by watching a noble tragedy unfold. Aristotle would be pleased.

But in this simple, poignant tale, we also see what I suggest is a crystallization of not only the great dilemma at the heart of literature—and of all art for that matter—but also the distillation of what might be called the heart of the legal drama.

For as poet Edward Arlington Robinson said, art “expresses the inexpressible,” and doubtless not even the most unimaginative person who reads Gerald of Wales’ tale would reduce it to its basic plot points: “Man gets revenge on enemy by killing his son.” Nor would even a fuller, but nevertheless word-bound reduction satisfy: “Prisoner ironically tricks King into suffering the same fate King has inflicted upon him.”

The tale is about more than that in the way that some sights beggar description, and in the way that some loves are best honored in silent reverence. This short tale of revenge is about so many things—graduated tests of love—each demanding more of the father until he, in his panic and dread, unwittingly sacrifices everything, even his progeny, even his future. It is about the blind prisoner, who has already been victimized by castration, and will not be further victimized by tricks.

It is also about the wisdom and authority of experience, the patience of fury, the slowness of hate, and perhaps above all—the novelty of pain, which comes from such odd directions and takes such bewildering forms that we could never have predicted it, and even when it comes, can never fully understand it—“in my teeth” the man screams of where his pain resides, shocking us because we know this truth is as strange as it is great, and as costly as it is memorable. Forevermore, we can see the landscape of Doloribus—sorrow.

If this instance of art helps us see, provides us a lens by which we know more of life, of living, and of man who lives his life, what can it do for our understanding of law and justice and man’s submission to and flight from the same?

For it is a well-established fact that of all the means of providing tension in a story, of all the ways of complicating a plot, of all the ways to raise drama to a fever pitch, it is the subject of justice—its observance, its infraction, its perversion, its redemption—that is most ready to hand. And the litany is long—Euripides, Shakespeare, Faulkner—this short tale of Gerald of Wales—who have written on that which lies outside the law, but is often very convincingly confused with it—revenge.

In short, if art is the age-old mirror held up to the human soul, it has much to reflect of its age-old subject, the law, and the souls, just and unjust, portrayed therein. It is perhaps not an understanding that can be reduced to Latinate words on the confines of a yellow and blue-striped legal pad, but one that can be discerned silently, respectfully, and with a largeness of vision that helps us know better our world and our place in it.

April 27, 2015 Jesus: Here, There, and Everywhere
Recent Comments
0 | Leave a Comment
"I miss that dragon the most finally it's here. 😳IJ.636PX.CO/c7234i"
Dmaned11123 Poetry Friday: “The Burned Butterfly”
"Ah, so now the imaginary War on Xmas is transmogrified into The War on Santa, ..."
David Miller How to Win the War on ..."
""Aural" refers to hearing, "visual" to seeing"
merphd The Gutenberg Imagination
""It doesn’t matter when you start the Sinatra Christmas playlist or put up your tree. ..."
C_Alan_Nault How to Win the War on ..."
Browse Our Archives
Related posts from Good Letters