Jesus: Here, There, and Everywhere 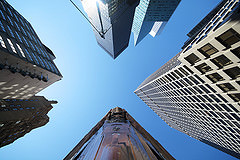 Gertrude Stein once said of her hometown, Oakland, California, where she was raised after having been born in Pittsburgh, that “there is no there there.” This is often taken as a knock on Oakland—a city that is not really a city, that has no center, that lacks an identifiable sense of place. This is how I felt about Los Angeles when I was teenager growing up there.

Looking out into the smog from a vantage point in the Hollywood Hills, I’d ask no one in particular, “Where is the damn city?” Los Angeles, to me, was an infinite sprawl of one-story structures stretching off into the desert and the scrub brush and the impossibly dry hills.

I moved to New York City as a young man partly to find a place that had a “there.” The density of Manhattan seemed the very antithesis of Californian spatio-temporal malaise. When you walked down the streets of Manhattan, I thought, you’d know you were unmistakably somewhere.

Over time, I came to doubt that, too. The search for the “real” New York can be just as frustrating as the search for thereness in California. In New York, authenticity evaporates. It is always one borough away, one generation and art movement ago, one gentrified neighborhood before you got there.

Does everyone have the thought, at some point in life, that there is no there anywhere on Earth? Even the cosmos, with its vast swirl of galaxies and interplanetary stuff, seems overwhelmingly “not there.”

Then, one day, you find yourself in Jerusalem. You round a corner in the Old City and there it is, the Church of the Holy Sepulcher.

This Church is worshipped by millions of Christians as the site of Calvary, the place where Jesus was crucified. The Church contains the final four stations of the Stations of the Cross. It is also, according to many, the site of Jesus’ tomb and, thus, the site of the Resurrection.

It is said that in 326, the mother of Constantine the Great, Saint Helena, discovered the One True Cross in what is essentially a basement of the church. If that weren’t enough, the prison of Jesus (the place where he awaited execution with the two criminals) is located within the church, as is the spot where the two Marys are supposed to have wept over the dead body of Jesus. And you can visit the Chapel of Derision, where Jesus is supposed to have been tied to a column and scourged (also one of the final Stations of the Cross).

Do you see that otherwise unobtrusive little side chapel? Well, it happens to be right under the spot where Jesus was allegedly lifted up upon the Cross and died. When he did, an earthquake shook the land and a crack opened up in the rock. Look, it is right there. Right there.

The spot where Jesus’s blood flowed down through the rock and came to rest is the site of the tomb of Adam, the first man. So, when Jesus died, the original man was connected, literally, by a rivulet of blood, to the man/God who renews history and begins a new covenant. There’s the crack. There’s the spot.

There is so much there there at the Church of the Holy Sepulcher that it verges on the absurd. Can one spot on Earth hold so much there? It is an overabundance of thereness. Forget the fact that just down the street is the Wailing Wall, a place of tremendous there. And across the way, the Dome of the Rock—so profoundly right there.

In his book on the Holy City, Jerusalem, Jerusalem: How the Ancient City Ignited Our Modern World, James Carroll wrote the following:

As this book will show, vague intuitions about the numinousness of this place—specifically, about the rock over which the Islamic dome now stands—evolved from the fertility-god cults of prehistoric times into actual incarnationalism, an idea, larger than Christianity, that the sacred shows itself not “near here” or “in the air” or “perhaps” or in “the idea” of the place, but hic. Here and now. In this place and no other.

As Carroll writes in his book, he went to the Holy Land looking for a real place, a real spot, hic, where something significant and lasting actually happened. He was fleeing the places in which there is no there there. He was seeking a place of ultimate thereness.

Carroll ended up in Jerusalem. He also traveled to Bethlehem—as did I—to the spot on the floor with the plaque that says, Hic Incarnatus Est. It happened right here.

“Despite what that assertion has come to mean to me, my first sight of it left me cold,” Carroll wrote.

From what I saw, the birthplace of the Lord was a tourist trap. And so, as I found on my own pilgrimage—“Here Jesus wept over Jerusalem…Here Jesus cured the leper…Here Jesus mixed spittle and mud”—was every holy site. The assertions made at the sacred places seemed glib and incredible to me.

But there is another comment Carroll makes in his book: “The Kingdom of God is here, Jesus said again and again.” The here that Jesus was talking about is in Oakland, and Los Angeles, and New York City, and even the tourist trap of Bethlehem.

The task, it turns out, is not to find the magical place out there. The task, somehow, is to find the here in every there.

Photo used above credited to Maelick and used under a Creative Commons license.

April 28, 2015 Death Comes for the Deconstructionist: An Interview with Daniel Taylor
Recent Comments
0 | Leave a Comment
""Aural" refers to hearing, "visual" to seeing"
merphd The Gutenberg Imagination
""It doesn’t matter when you start the Sinatra Christmas playlist or put up your tree. ..."
C_Alan_Nault How to Win the War on ..."
"Yup."
Max Marvel Finding My Inner Calamity Jane
"I an confused by the use of "aural" here: "In The Gutenberg Galaxy, he explained ..."
William G II The Gutenberg Imagination
Browse Our Archives
get the latest from
Catholic
Sign up for our newsletter
POPULAR AT PATHEOS Catholic
1