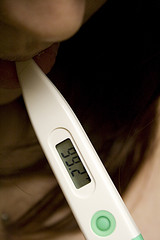 When well, it’s easy to forget how utterly miserable it feels to have a fever.

In fact, the moment the fever breaks, already the memory recedes—we may feel exhausted, wiped out, laid low, but also relieved, no longer at war with our own body. Even if we try to remember, can intellectually recall and describe what it is like, the immediate feeling is gone, and so is our most intimate experiential knowledge.

It is like trying to describe falling in love or the taste of lasagna, while neither loving nor eating.

Children pick up fevers as often and as casually as they pick up anything that has fallen to the floor that will fit inside their mouths. Their soft, new little bodies are susceptible to invasion, to viruses and germs that need to be burned away, smoked out by the immune system, while their anxious parents rock them all night, or dip them in a cool bath.

But as we grow older and develop our sturdy shells of immunity, fever is something we forget about.

Until we have one. And we remember.

This happened to me last week. On Thursday I received a vaccine with no expected side effects, then Friday morning—BAM—something was wrong. I headed to work, thinking that being out in the world would relieve my lethargy and achiness, but by five-o-clock I was home on the sofa huddled under a quilt, asking David to pick up some sherbet.

I was miserable. Besides the physical distress, I was unhappy to have even one evening hijacked by illness. I had things to do, important things. Our move to Philadelphia, now under four weeks away, has filled our calendar with urgent tasks. There are boxes to be packed, résumés to be emailed, apartment managers to be called, local haunts to be visited one last time, friends to be seen.

And yet I found myself immobilized on the sofa, drifting in and out of sleep. I felt like crying, but it would hurt too much to do so. I was angry that my body had become my enemy, that it was no longer helping me, that it had shown itself to be other than me, when I thought we were a team, inseparable.

That, of course, is the lie that we all believe, that a fever (or any illness, many much more grievous than a simple fever) suddenly and rudely uncovers. We, what we think of as “we,” as “ourselves,” are very much separable from our bodies. We are not our bodies—or at least not merely our bodies. And one day we and our bodies will permanently part ways.

Sylvia Plath wrote a poem called “Fever 103°” just a few months before she and her body parted ways. She describes the experience of having this dangerously high fever through a string of harrowing metaphors that revolve around the concept of purity. Of heat as a purifying force. And therefore of the body as what must be conquered to achieve purity:

The sin. The sin.
Darling, all night
I have been flickering, off, on, off, on.
The sheets grow heavy as a lecher’s kiss.
Three days. Three nights.
Lemon water, chicken

Water, water make me retch.
I am too pure for you or anyone.
Your body
Hurts me as the world hurts God.

One can imagine Plath burning from the inside, turning electric, flickering, a foe of water. During my own fever, I stumbled to the kitchen to get a glass of water, but because I came upon it first, picked up a ripe plum that had been in our kitchen for a week. Suddenly I could think of nothing but this plum, heavy as it was with its own water, and when I bit into it, I had never needed to eat anything more than this, so cold and sweet.

Later, lying down again, I looked toward the window. Without my glasses, the branches and leaves outside were moving brightly but fuzzily in the sun, and I felt as though I were looking through a kaleidoscope. As if I were seeing patterns of light and color that were more beautiful than what I could otherwise see. As if, sure, I were a little closer to seeing as God might see.

Later in Plath’s poem she levitates (“I think I am going up / I think I may rise”), whereas I eventually came down from my fever, back to my muscles doing what I asked without complaint, back to plums being okay but nothing special, back to trees outside being normal trees, holding no epiphanies.

For now, my body and I are reconciled. We have resolved our quarrel. But like lovers just after an intense fight, we move tentatively around one another, aware that there is distance we could have, that it is possible we could break apart.

Dyana Herron is a writer and teacher originally from Cleveland, TN, who currently lives in Seattle. She is a graduate of SPU’s MFA Program in Creative Writing.

Photo above credited to Pyxopotamus and used under a Creative Commons license.

April 24, 2015 The Soul of the Law
Recent Comments
0 | Leave a Comment
"Ah, so now the imaginary War on Xmas is transmogrified into The War on Santa, ..."
David Miller How to Win the War on ..."
""Aural" refers to hearing, "visual" to seeing"
merphd The Gutenberg Imagination
""It doesn’t matter when you start the Sinatra Christmas playlist or put up your tree. ..."
C_Alan_Nault How to Win the War on ..."
"Yup."
Max Marvel Finding My Inner Calamity Jane
Browse Our Archives
get the latest from
Catholic
Sign up for our newsletter
POPULAR AT PATHEOS Catholic
1