Monasticism in Lockdown America, Part 8: Psalms, In the Beginning

Monasticism in Lockdown America, Part 8: Psalms, In the Beginning May 19, 2015 Chris Hoke 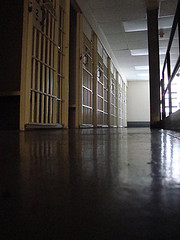 I always privately hated the psalms.

Most of them, anyway. As a teenager, I’d leaf through the Bible’s songbook quite often and feel it was full of self-pity and self-righteousness, often launching into bombastic praise of God and two lines later wishing curses on enemies. I didn’t understand why Christians still used the psalms, and so often.

As I got older, it was the worst part of visiting a monastery for me: hearing monks or nuns fill up so much of their time together chanting through these oft-sub-merciful prayers. The sentiments throughout the ancient songbook seemed so far from the heart Jesus teaches us to inhabit. They felt human, as Nietzsche said, all too human. Yet monasteries cycle through the entire Psalter month after month, year after year.

My attitude towards the psalms changed only in the last year or so—after working nearly a decade with men I’d meet in jail, on the streets, often in gangs. I have been learning how to pray with men who have trouble with their emotions. Expressing them, that is.

I told this to a group of young gang-related men and teenagers at my apartment one night last year, when I wanted to start a weekly conversation among them joining rap lyrics and the old psalms. All the homies in the living room agreed most guys bottle up just about all their emotions, and hardly open up to anybody.

They smiled. An easy one.

“Smash a hole in the wall.”

It’s not just youth on the streets. I, a kid raised in the church now wielding a masters’ degree, have problems crying, or knowing how to pray many days.

Anger. Grief. Lust. Happiness. Hate. Excitement. Fear. Flashes of illogical and vision-expanding love. Violence and suicide. Where does all of that go?  One psalm says, “Let all that is within me praise the Lord.”

I told them about my recent phone calls with a friend in solitary confinement. How, when I asked him how his prayer life had begun, when his heart had opened to God in that horrible place, his answer surprised me:

“It was when I start cussing God out, when bad shit happened to me. Like, ‘What the F#*K!? Why you always do this to me!?'” He knew it wasn’t God putting him in the hole, or causing his girlfriend to leave him out on the streets unable to make overpriced phone calls to ask her why. “But I started getting close to God when I just started talking to him like that, not holding shit in anymore. I felt he was listening, and didn’t leave me, you know?”

That’s when I began to see the psalms not as theology, but as the full spectrum of raw humanity, an uncensored opus of human experience before God. Basically, what my friend in the hole discovered.

Praise needs to be uncensored as well. And not just from profanity.

So often the inmates in the jail I meet with, like the psalmists, proclaim bad theology in their joy. The Everything-Happens-For-A-Reason fatalism is so easy to fall into when things go well—like when a guy’s heart has totally changed in our jail Bible studies, he’ll say firmly, “I’m so glad God brought me here, and I’ll accept if he sends me to prison…”

I cringe, but have learned not to correct them too quickly. I think: God didn’t arrest them. God’s not in the black robe in the broken system sentencing them to too many years in a lifeless prison based on faulty evidence.

But this happy man in red scrubs before me has sipped from a sweet light that has flooded his shadowy head and all he can feel is gratitude, all he can see is God in this moment. He is blinded by goodness. And so he makes blind cosmic statements, however unhelpful for listeners, about the nature of God. Yet the psalms give our praying hearts permissions to get it wrong just like this. Over and over.

The late Northwest poet Robert Sund wrote about “how we die daily of unexpressed affections.”

Maybe monks, in their full-time vocation of prayer, constantly run through the psalms as a way of cycling through the entire range of human experience, from affection to revenge to moody despair. Like warm-up scales for a choir of closing-every-day hearts. Or calisthenics stretching the breadth of their inner emotional freedom to lift any season, any letdown, any rage or lust or confusion or skipping joy out of the darkness and into communion with God.

To be continued tomorrow …

Chris Hoke works with Tierra Nueva in Washington State’s Skagit Valley. His first book, WANTED: A Spiritual Pursuit Through Jail, Among Outlaws, and Across Borders came out from HarperOne in February 2015. Learn more at chris-hoke.com.

Photo above credited to 826Paranormal and used under a Creative Commons license.

May 18, 2015
In the Marrow of Depression and Anxiety
Next Post

May 20, 2015 Monasticism in Lockdown America, Part 9: Psalms, In the End
Recent Comments
0 | Leave a Comment
""Aural" refers to hearing, "visual" to seeing"
merphd The Gutenberg Imagination
""It doesn’t matter when you start the Sinatra Christmas playlist or put up your tree. ..."
C_Alan_Nault How to Win the War on ..."
"Yup."
Max Marvel Finding My Inner Calamity Jane
"I an confused by the use of "aural" here: "In The Gutenberg Galaxy, he explained ..."
William G II The Gutenberg Imagination
Browse Our Archives
get the latest from
Catholic
Sign up for our newsletter
POPULAR AT PATHEOS Catholic
1

Christians Must Realize That The Pandemic...
A Little Bit of Nothing
Related posts from Good Letters