In the Marrow of Depression and Anxiety 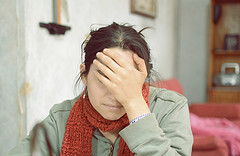 By the time you read this, I’ll be feeling much better. Therapy will have commenced, medications will have been adjusted, and clinging to the One who clings to the brokenhearted will have kept me affixed to a drip line of peace.

I can say this with some confidence, for it’s not my first time off the high dive. An episode with postpartum depression knocked me out in the spring of 2005. A thyroidectomy, and the resulting difficulty with getting my levels adjusted, incapacitated me in 2011. Today, I’m not entirely sure what’s going on. Hormones seem to be fluctuating. Obsessive thoughts have sparked actual conflicts, causing more anxiety and guilt. Constantly trying to “hold my thoughts captive” has depleted my energies and now sunk me into a depressive state.

I’m out of body. I can’t inhabit myself. I write down several dozen rational facts but can’t escape the adrenalin panic under my skin. I go a whole day without eating, then suddenly buy a Filet-o-Fish sandwich—an obvious gesture of self-loathing.

I lie on the couch for hours, paralyzed. I can’t read. I can barely get through an episode of Unbreakable Kimmy Schmidt, a show friends promised would cheer me up. One night, I wake on the hour. The next, I sleep thirteen.

I can’t bring myself to go to church because people who love me will ask what’s wrong. I can’t hide my feelings, but I don’t want to talk. Opinions, advice, and solutions sting like whips on a flayed soul. I look at pictures of myself laughing and reading poetry at a conference just two weeks ago and can’t imagine who that person is.

I don’t know, I say to my doctor, trembling, why this is happening now.

She points to some information on a screen. My previous doctor had prescribed an antidepressant not specifically indicated for premenstrual dysphoric disorder, the trigger for many of my episodes. I’ve been on the wrong medication for four years while feeling like I’ve been doing something wrong.

But maybe I have been doing something wrong. Maybe I’ve created a life with so many built-in escape hatches—Facebook, chocolate, shopping, “success,” sarcasm, friends, sex, and Breaking Bad—that I no longer know what I’m trying to escape.

Am I trying to escape? If so, what?

This is the scourge of depression and anxiety: carrying burdens of guilt for a body off kilter. Yes, circumstances in my life, like turning forty and struggling with my identity since my kids have gone off to school, have added stress. Parenting has been harder than I ever predicted, and my husband and I are feeling the strain. Forging a writing career while still trying to earn actual money has turned my brain into a California freeway interchange. I’ve depended too much on attention and affirmation from friends. But my inability at times to apply what I know about reality, myself, and my God in order to find calm is rooted in a body fundamentally broken.

Wait: There’s the guilt again. Or is it healthy self-reflection? If I experience intense emotions one week but not the next, are those emotions still valid? Do I take them to task? Or do I just wait out my body? But what if it doesn’t switch back this time?

I’m tired. Lord, relieve the troubles of my heart, no matter their source, and free me from my anguish.

I know—oh, I know!  I can’t just “pray my way out” of a chemical imbalance. Or can I? No, those are toxic thoughts, God. They’ve gotten me in trouble before. Though I know it would take just a snap of your fingers…

Oh, me of little faith.

I wrote about postpartum depression after having reflected on it for nearly a decade. Today I am writing from within the marrow of depression and anxiety when I have no answers, poignant quotations, or anything beautiful to say.

But I know this: This afternoon, I’ve spent hours lying in bed with the window open, listening to my husband nail boards together for a backyard treehouse. It has been one of the first warm days in a stubborn spring. The treehouse will probably be done in a week or two.

By the time you read this, the kids will be playing ten feet in the air, laughing under unfurled maple leaves. And I will be digging in the garden, watching the ants cluster on the peony buds, having almost forgotten about today.

Photo above credited to Jazbeck and used under  a Creative Commons license.

May 19, 2015 Monasticism in Lockdown America, Part 8: Psalms, In the Beginning
Recent Comments
0 | Leave a Comment
"Ah, so now the imaginary War on Xmas is transmogrified into The War on Santa, ..."
David Miller How to Win the War on ..."
""Aural" refers to hearing, "visual" to seeing"
merphd The Gutenberg Imagination
""It doesn’t matter when you start the Sinatra Christmas playlist or put up your tree. ..."
C_Alan_Nault How to Win the War on ..."
"Yup."
Max Marvel Finding My Inner Calamity Jane
Browse Our Archives
Related posts from Good Letters