That Woman is Gone: Discovering Postpartum Depression May 15, 2014 Tania Runyan 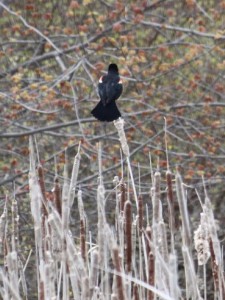 some spring mornings, even nine years later, a remnant returns: red-winged blackbirds wake me before dawn, panic cinches my throat, and adrenalin pulses in my fingertips.

I still don’t know whether the sleeplessness caused the depression or if it was the other way around.  By the time we checked out of the hospital, because of a sleepless night before the birth and a litany of distractions (mostly a blood-pressure cuff accidentally set to squeeze my arm every sixty seconds), I’d gone almost seventy-two hours without sleep.

Is that what made me lose my mind? A faulty blood-pressure cuff?

My mom flew in from California to help me adjust to those first days with a newborn and toddler. I couldn’t settle down to sleep, but I figured I was lovestruck with my copper-headed bundle. I funneled my energies into cooking, shopping, and planting flowers when the baby was still only days old.

My mom left, and I still couldn’t nap or sleep at night. I’d feed Becca and lie awake until she cried again. My husband took over nighttime feedings, but it made no difference. I thought my nerves would explode through my skin. Even if I dozed fitfully for an hour or two, the birds would always wake me before dawn.

Is that what sent me over the edge? The birds?

I’d put Becca in her stroller and stumble around the neighborhood as the sun came up, wanting to curse the well-rested birds.

I began to obsess over sleep. Convinced I would never function again, I thought my days of parenting, writing, and friendships were over. I infused myself with Krispy Kremes and Frappucinos in order to drive in a straight line. We’d been looking at houses, but I couldn’t picture myself anywhere but on this dark, empty street, walking with a baby at five in the morning.

At Becca’s checkup, the doctor gently mentioned post-partum depression. I shook my head. To me, PPD meant psychopathic women with absent husbands drowning their children. Objectively speaking, my life was almost without fault. I wasn’t angry with my children. I was overwhelmed with myself.

Could I have stopped it then?

To entertain my toddler one day, I turned on the annual family DVD my husband had just finished. I froze as I watched a pregnant woman help her daughter with pin-the-tail-on-the-donkey. I am not that woman. That woman is gone. And then, this horrible thought: I wish I could go back. I would have paid hundreds of dollars to step into that video and be myself again, even for a minute.

Watching that DVD stands as the most terrifying moment of my postpartum depression. I didn’t want to take my life; it was already gone. And I had no idea how to find it.

I called the postpartum hotline.

They sent me to a psychiatrist, whom I thought would offer me some easy tips. But she gave me some sleeping pills and a prescription for Zoloft.

“Someone with big problems. And I’m not sad. I’m anxious.”

“Postpartum can present that way,” she said.

I went home, ashamed for even visiting a psychiatrist. I was a strong, spiritual woman. Several people told me not to give in to the pills that “doctors hand out like candy.” Tom Cruise had just lambasted Brooke Shields about taking medicine for PPD, and although I knew he wasn’t the most credible source, his view reflected a common opinion: You’re better than this.

The next night, I watched Garden State, in which the main character, numb and manipulated by too many meds, throws them all away.

I tossed the prescription, vowing to take more vitamins and pray harder.

Then things really got out of hand.

The sleeping pills helped me finally get some rest, but then I turned my obsession to worrying about addiction. I’d never had problems with substances, but after reading online forums for hours, I convinced myself there was no difference between me and Eminem stringing himself out on Ambien at a nightclub. I’d stop taking the pills, then couldn’t sleep. I cried and threw things. I hated everyone I saw, from the neighbors to the Target cashiers—those people who could sleep, laugh, and love their families like normal people.

At one point, my toddler asked me to tie her shoes. I was so overwhelmed by the request that I stood there, paralyzed, then crumpled to the floor.

I returned to the psychiatrist’s office, a desperate failure.

“Trust me,” she said. “Take the medicine. You’re headed for hospitalization.”

“This happens to one in seven women. You did nothing wrong.”

The next morning, I stared at the Zoloft starter pack. I’d never bungee-jumped before, but right now I perched on a swaying bridge by the balls of my feet.

I swallowed the pill and imagined myself flowing down my own esophagus to the dark passages of my body. I had to float into the unknown, for I had no alternative. If I had to play into the hands of pharmaceutical companies, so be it. There was no time to experiment with herbal remedies, breathing techniques, or more prayer. I had become an apparition of myself, but instead of slipping through life with the relative peace of a ghost, I smoldered in the hell of my own unbalanced body.

Antidepressants still carry a stigma. And there are still people who believe mental illness is nothing more than unchecked sin. But Paul advised the Romans that “each one should be fully convinced in his own mind…. The one who eats, eats in honor of the Lord, since he gives thanks to God, while the one who abstains, abstains in honor of the Lord and gives thanks to God.”

Some people don’t believe in taking pills under any circumstances. But I was convinced in my own mind that denying the responsibility to take care of myself and my family out of pride or fear was the real sin. So I followed the treatment with thanks, eventually, to God.

I took a walk that morning in the forest. The red-winged blackbirds perched on the cattails, trilling, hanging on even when the wind pitched them over the water.

May 16, 2014 Avoiding the Mirror
Recent Comments
2 Comments | Leave a Comment
""It doesn’t matter when you start the Sinatra Christmas playlist or put up your tree. ..."
C_Alan_Nault How to Win the War on ..."
"Yup."
Max Marvel Finding My Inner Calamity Jane
"I an confused by the use of "aural" here: "In The Gutenberg Galaxy, he explained ..."
William G II The Gutenberg Imagination
"My friend is looking for a Pepper Smith he served in the army with, was ..."
Christine Budnack The Love Song of Pepper Smith
Browse Our Archives
get the latest from
Catholic
Sign up for our newsletter
POPULAR AT PATHEOS Catholic
1