A Place Where We Can Talk 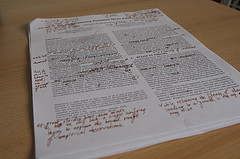 “Somewhere is better than anywhere.” —Flannery O’Connor

In my sophomore year of college, Professor Karanikolas took a semester to tear apart my writing—which until then I thought quite good—and rebuild it into something worth reading. He returned many of my early essays with marginal comments like, “Oh my God,” and “You’ve made the best of a very bad business here.” But the reeducation process was a painful necessity if I was ever to become a writer, and I’m grateful for those many hard lessons.

One of my later essays that semester included a sentence (the content of which I’ve long ago forgotten) that, by itself, would have been embarrassingly trite. In the margin, though, the professor wrote in red ink pen, “You had to do a lot of writing beforehand to say this.”

His point—one that still informs my aesthetics—is that simple gestures are often stale and vacuous without preparatory context and much hard work. For example, Charles D’Ambrosio’s short story, “Drummond and Son,” is—among other things—a successful experiment in writing a narrative in which the final bit of dialogue is “I love you.” What keeps it from descending into sentimentality is D’Ambrosio’s engrossing, sensitive, and finely detailed story.

In a New York Times opinion piece, Tenzin Gyatso, the fourteenth Dalai Lama, suggested that the great religious traditions have compassion at their core. He cites his 1968 conversations with Thomas Merton as an early invitation to interfaith dialogue using the centrality of compassion as a key. For both men, the meeting overcame conceptual obstacles to mutual understanding.

When I read the Dalai Lama or Merton on religious common ground, I’m willing to accept much of what they gesture toward. What I find less persuasive, however, are nods of approval from less disciplined American spiritual observers, often followed by clichéd observations like “All religions are really saying the same thing in different words.”

Whatever Merton and the Dalai Lama may mean when they write about common features of religious traditions, their insights and language are informed by years of demanding practice in a particular tradition. For all the similarities the two find between Christian prayer and Buddhist meditation, the conversation is grounded in specific daily practices ultimately directed toward a Triune God for Merton and that which lies beyond dukkha (suffering) and saṃsāra (the cycle of rebirth) for the Dalai Lama.

Such ends are—for these two disciplined men—vast, mysterious, and beyond human comprehension, but they are neither abstract nor interchangeable.

In contrast, too many interfaith conversations—especially those in the developed global north—deal almost exclusively in abstractions and dubious assumptions of equivalence.

Consider again the sentence “All religions are really saying the same thing in different words,” of which every word is contestable. How much scholarship is necessary before one can make even the simplest observation about all religions? What particular definition of religion would you use to embrace Christianity, Buddhism, Confucianism, and, if new Atheist Sam Harris has his way in redefining “religion,” Marxist-Leninism as well?

What counts as a religion and what historical conditions lead a particular religious tradition to so name itself? Why, for example, did Hinduism not describe itself as a “religion” until the British Raj? (For those interested in how the West came to identify “religion” as a universal, transcultural category distinguishable from other aspects of common life—particularly the politics of statecraft—see William Cavanaugh’s book,The Myth of Religious Violence: Secular Ideology and the Roots of Modern Conflict.

Finally, as a writer, I have no idea what “really saying the same thing in different words” might actually mean. If Middlemarch or The Waste Land is adequately expressed in brief paraphrase, then they are not art at all, but propaganda.

One might as well claim all governments are “really saying the same thing,” since all attempt, in decidedly different ways, to establish an equilibrium between individual action and public order.

Even the assertion that various religious traditions grasp isolated parts of a larger truth implies that the larger truth is, in fact, knowable by other means. As theologian D. Stephen Long observes about John Godfrey Saxe’s moralistic rendering of “The Blind Men and the Elephant,” the poem makes sense only because we already know what an elephant is, while the blind fools don’t.

I hope I’m never that arrogant when speaking of God.

What I’m suggesting here is not that religions (whatever we designate with that word) can’t engage in meaningful conversation or find common ground. To the contrary, I’m convinced that, in a world where secular nation states possess the technology and rationale to incinerate enemies by the millions, interfaith conversation is not only possible, but absolutely essential.

But such conversations will only be fruitful when engaged by those who have experienced their particular tradition profoundly, thoroughly, and honestly and who are willing to claim it. The “first world” assertion that one can engage the Other from a position of objective neutrality is, quite simply, a modernist lie that should have died with the collapse of European colonialism.

Each one of us—even the nonbeliever—speaks from a particular place within a tradition—from “somewhere,” not an abstract “anywhere.” I have little patience for non-practicing pundits who “stay above the fray” and boutique multiculturalists who pick and choose what suits them rather than deeply entering one tradition.

Sinking deep roots into a particular tradition is similar, I think, to what biologist and agricultural reformer Wes Jackson means when he invites restless Americans to “become native to a place.” Christian monastic traditions generally require of their members a vow of stability, of forsaking other places, however attractive. Instead of endlessly worrying if something better lies just over the horizon, the situated monk can engage in a lifetime of good work.

That’s why I look for truth less in the abstract pronouncements of dabblers or so-called experts than in the practical words of monks.

Brian Volck is Assistant Professor of Pediatrics in the Division of Hospital Medicine at Cincinnati Children’s Hospital Medical Center. Brian received his undergraduate degree in English Literature from Washington University in St. Louis and his MFA in creative writing from Seattle Pacific University. His first collection of poetry, Flesh Becomes Word, was released in October, 2013. He is coauthor of Reclaiming the Body: Christians and the Faithful Use of Modern Medicine and contributed essays to Wendell Berry and Religion: Heaven’s Earthly Life, and The Spirit of Food: Thirty-four Writers on Feasting and Fasting toward God. His essays, poetry, and reviews have appeared America, The Christian Century, DoubleTake, and IMAGE.

Photo above credited to Nic McPhee and used under a Creative Commons license.

June 3, 2015
The Science and Sundayness of Play
Next Post

June 5, 2015 Hello, Insomnia, My Old Friend
Recent Comments
0 | Leave a Comment
"I miss that dragon the most finally it's here. 😳IJ.636PX.CO/c7234i"
Dmaned11123 Poetry Friday: “The Burned Butterfly”
"Ah, so now the imaginary War on Xmas is transmogrified into The War on Santa, ..."
David Miller How to Win the War on ..."
""Aural" refers to hearing, "visual" to seeing"
merphd The Gutenberg Imagination
""It doesn’t matter when you start the Sinatra Christmas playlist or put up your tree. ..."
C_Alan_Nault How to Win the War on ..."
Browse Our Archives
Related posts from Good Letters