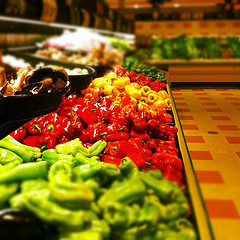 It is the Feast of Pentecost on the Eastern Orthodox calendar, the annual commemoration of the descent of the Holy Spirit on the assembled, expectant, and yet uncomprehending (read: totally clueless) Apostles. It is also the day after B.B. King’s funeral: “The Thrill is Gone” is going yet again, over and over, on the newscasts on the car radio.

And on this festival day, I am feeling once again my status as the Chief of Sinners, slipping out of the house with unwashed hair in a faded, above-the-knee, sleeveless, beach sundress. (So much for all my lurking on frum-clothing websites as of late and our family’s general decision to avoid any commerce on Sunday.) I’ve blown receiving Holy Communion today, having already drunk a lot of coffee in violation of the pre-Communion Fast. I do not feel okay about this, but I have to go to Confession anyway, so this is just another damned thing I can add to the list.

But I am not entirely unhappy, for on this early-ish Sunday morning I am at Wegmans. Wegmans, for those not living in the states of the Eastern Seaboard, is simply a Rochester, New York-based chain of grocery stores known for its giant range of “high” and “low” goods and exceptional customer service.

But the Wegmans in Woodmore Towne Centre—just off the east side of Washington, D.C.’s Capital Beltway—is, around here, freighted with far greater meaning: It is the SOLE upscale grocery store in the richest majority African-American county in the nation—a county where there is still no Nordstrom and where the long-promised Whole Foods still hasn’t opened. (Even though the distribution warehouse is in an industrial park not too far from my house.)

And this Wegmans is a suitable venue for pilgrimage: acres of air-conditioned aisles with a “festival” atmosphere, stands of flowers, artisanal breads, gorgeous housewares, and an in-store café where alcohol is served—a far cry from the dusty Safeways and Giants that have heretofore predominated, and in distinct contrast to the stripped-down discounter Aldi, which has been growing in the county’s more modest neighborhoods (including my own).

I have come to Wegmans because yesterday was busy and I had no time to bake the Pentecost cake that I try to make every year, an idea I got long ago from Evelyn Burge Vitz’s indispensable cookbook for the Christian year, A Continual Feast. It’s basically just helping children to decorate a plain cake with symbols from the narrative of Pentecost, such as a dove, rays of light, and the dramatic red flames, using piped-on icing. This year, I was going to do it with the students in my Sunday School class, as well as at home.

The vast store was quiet and chilled as I came in from the muggy summer heat, which has finally arrived. And I was struck once again, and comforted, by something that regularly comforts me: Just about the only people in the store at that time of the morning, aside from the staff, are folks dressed up and going to church. For the most part, these are not the stereotypical ladies-with-hats (“Sunday Crowns”), but a whole variety of dressed-up women, and men too: nice heels with matching bags, skirts, and not a pair of pants on the women among them; the men invariably in suits and ties. And also, here and there, a few West African women in long, bright, matching dresses and headscarves.

This Wegmans, I remember, happens to sit right in the middle of a part of town and is surrounded by a number of giant, some even mega-, churches: Woodstream Church, Metropolitan Baptist, Jericho Temple City of Praise, and the gargantuan, unparalleled Evangel Cathedral—which happens, interestingly, to be a multi-racial church—with its Gothic-style spires rising above acres of asphalt parking.

And that’s to say nothing of the dozens, really, hundreds of Latino Pentecostals, West African Methodists, and storefront churches in closed-down Dairy Queens and old machine shops. There is an African Anglican church in a nondescript office park next to the Pepsi-Cola plant.

Just a few miles away, according to my own guilty stereotype, everybody else is sleeping late and running marathons and headed off to yoga class: the “yoga mats,” being the noun my husband and I have coined. I love this sense that here, inside the Wegmans, is the common cultural compact I grew up with—the panoply of Sunday dresses and churches and dinners and naps—married to the culture of material access and affluence. (Sunday dinner, in my time, might have come from Morrison’s Cafeteria, because it was “too hot to cook.”)

And I know, I know: The Medium is the Message. The Jesus who was betrayed by the power structures would likely find his salvific act compromised or betrayed by the incessant commercial call of BOGO. And I have enough African-American friends who themselves are in flight from their own oppressive religious heritages that I’m partly embarrassed by own reaction: I don’t want to be one of those white people who views black folks through the prism of my own romanticism—which can be just another form of limiting prejudice.

And yet: There is something holy about this space, to be here in this store, amid the wonder of fragrant fruit and rich cheese—even, of all things, an “olive bar.” I remember the corridor of 14th Street in D.C. in the early eighties, a full fifteen years after the 1968 Baltimore Riots, and the shotgun shacks in the Delta when I was growing up, and I think that here, in this retail desert, we deserve Wegmans.

It is a Feast, while not mine, that still needs to be kept.

I go home and dress up for church. And I think, Let’s go out in our bright dresses and startle them all with our Joy.

Photo above is credited to BuzzFarmers and is used under a Creative Commons license.