I Come Not to Praise the Megachurch 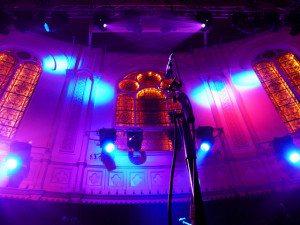 The church may have begun as a non-spiritual entity, a business of some sort that was judged insufficiently profitable. Maybe it was one of those sprawling climate-controlled storage facilities, for example, the kind assembled from pre-fab insulated concrete forms, crafted not for enlivening souls but for storing up the treasures that have no place elsewhere.

A utilitarian exterior makes good Christian sense, because man can live no more on bricks and mortar than bread alone, and a competent preacher doesn’t need flying buttresses and gargoyles to pursue the modern business of soul-saving.

Besides, a spare exterior frees up cash for the Yamaha Rivage PM10 live sound console that looks like it was stolen from the bridge of the starship Enterprise. It helps you buy, rather than lease, the SPL Passeq passive equalizer and Concert Fidelity 080 preamp, essential so you can weaponize the sound and pass it to your Sennheiser KA40 compact Class-D, which cannons it at three hives of JBL VerTec line array speakers, each with a dial capable of going to eleven and blowing the scuppered PVC membrane roof off this joint.

These are supplemented by EV QRx series trap boxes adorning the aluminum and black non-slip plywood stage that looms where our primitive forbears once stacked icons, and above which hovers, like a cloud of fire, custom truss-work rigging implanted with multi-colored LED banks, their formidable luminosity augmented by 1000-watt GE PAR64 cans, the really heavy firepower, for when people need reminding the kingdom of heaven is motherfucking nigh, that they’d better sit up straight and attend to a trinity of Draper 240-inch projector screens, each targeted by a Panasonic PT-DZ21KU 3-Chip DLP projector hurling 20,000 lumens of holy fire and emblazoned with convicting verses, and framing these screens an angelic host of luminous curtain walls glowing royal mauve and heavenly ultramarine.

There are these shimmering color displays, and a short walk away from these squats a copse of rubberized metal stands to pedestal the Fender Stratocasters and Taylor acoustic six-strings which serve the plentiful, beatific, lip-quivering, faces-ever-upturned worship team, all of them, even the guitarists between chords, with right hands raised to the cricketed roof and to God who resides above it. All of them but the hunched and slow-writhing drummer, who with closed eyes thumps coated double-ply Mylar heads almost erotically, with an occasional twitch, like any second he may cut loose and beat the ever-loving hell out of these drum heads, secure in the knowledge that the God who crumpled Jericho with trumpets surely won’t mind the noise, especially coming as it will from behind the modesty of a Plexiglas cage.

But no, the drummer remains bent and tenderly thumping, the world’s most patient Tantric lover, and when his comrades have not half but all their palms stretched to the matte-black truss-work, he will tease the quivering Zildjians with his stick tips to yield a gentle godly crescendo, the signal for the preacher to stride onstage in tailored jeans and blazer and untucked dress shirt that is always a different color but which never clashes unpleasingly with the digital phosphorescent mauve and ultramarine, a comforting priestly garb for his bejeaned and summer-skirted parishioners.

And he will proclaim some things about God that he really does believe, from gelled-hair to clutched Bible all the way down to his Skechers’ rubber soles. He will tell you things that make you feel less terrified, or furious, or just plain indifferent when you ponder God, and for this earnest effort plus the earworm choruses, people throng for three shows on Sunday and two on Saturdays, which proves the business model works.

And the thing is, this feeling is more than they get from anything else in their lives, no matter how much we are inclined to deride their faux warehouse and their preacher’s faux hawk and their concert seating and their Hallmark sentimentality, all of which are maybe more an indictment of us than them, because whatever it is we think we’re offering, not a soul in this modern-day ark chose it, and if your girlfriend, say, wants a dimwit with a muscle car more than you, sure, you can make fun of the dimwit and his environmentally irresponsible transportation, but what the hell, exactly, does it say about you, that he’s the superior choice?

A man could do worse to this world than the simple Jesus-loving preacher who makes people feel less terrified or furious or indifferent. A man could do far worse, in fact, and many of us do. And this is a conundrum indeed, because if heaven were this church, some of us would rather go to hell, yet for many people it is a kind of heaven, or the closest they know how to get.

And here are we serious Christians saying we believe Jesus about the kingdom of heaven being here, but if it’s here then we probably ought to act like it, what with all that turn the other cheek and give your brother the shirt off your back stuff, and my God, can you imagine ten million people suddenly doing that?

It would be better than a concert, better than a light show, so uplifting, in fact, that the big-box preacher might say let’s cut some windows in this coffin, let’s let the light in, because it’s brighter than ever out there, like ten million dulled bulbs suddenly lit up, and do you see, do you see, this is what I’ve been telling you: it really has come, it truly is here.

Tony Woodlief lives in North Carolina. His essays have appeared in The Wall Street Journal and The London Times, and his short stories appeared in Image, Ruminate, Saint Katherine Review, and Dappled Things. His website http://tonywoodlief.com/.

September 4, 2015 For the Newlyweds
Recent Comments
0 | Leave a Comment
"I miss that dragon the most finally it's here. 😳IJ.636PX.CO/c7234i"
Dmaned11123 Poetry Friday: “The Burned Butterfly”
"Ah, so now the imaginary War on Xmas is transmogrified into The War on Santa, ..."
David Miller How to Win the War on ..."
""Aural" refers to hearing, "visual" to seeing"
merphd The Gutenberg Imagination
""It doesn’t matter when you start the Sinatra Christmas playlist or put up your tree. ..."
C_Alan_Nault How to Win the War on ..."
Browse Our Archives
Related posts from Good Letters