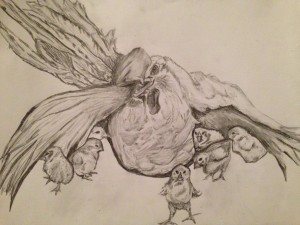 In August, the musical duo Alright Alright, composed of husband and wife Seth and China Kent, performed in our living room for their last house concert in a series of a dozen across the country.

As the musicians (described as “piano-based folk Americana with a healthy measure of art-song/cabaret”) set up their lighting and cigar-box guitars, a number of children played outside in a tree house garlanded with flowers. Cicadas electrified the maples. Adults drank cheap pinot and dipped pretzels in hummus. For many, the next day would be the first day of attending or teaching school. Already, it was a bittersweet, beauty-haunted evening.

And then the couple sang.

With her rich, soulful voice and his tender harmonies, China and Seth filled our small space with songs about quirky lovers, a dying father, child soldiers, and Mary, mother of Jesus. Our usually empty living room couch and chairs radiated with an unlikely assortment of friends and neighbors who just minutes before had been strangers. The immediate, shared intimacy of participating in this music together was palpable: communion, healing, and worship.

A few weeks later, Rachel, one of my friends who had attended that night, texted me a picture of a drawing of a nesting hen and wrote, “So here is the drawing—the first in about eighteen years that was birthed from the evening of music! It is based on Psalm 91:4: He will cover you with his feathers. He will shelter you with his wings. His faithful promises are your armor and protection.”

There was no instruction or even discussion of visual art at the concert. There was no mention of Psalm 91 and certainly no “preaching” of any kind. Rachel, for the most part, sat quietly in the corner of the room. Then she went home and found a missing part of her soul.

I’ve long believed in the arts illuminating one another. Playing instruments has always helped me write and vice versa, though I’ve never really settled on why. Perhaps the rhythm of a fiddle tune shapes the line of a poem. Or a lush, lyric line prompts me to linger an extra second on the string. I do know that both prime my ear for listening—paying attention—the lifelong discipline of any committed artist. In the end, both poetry and music teach me that taking the time to unravel my voice is worth it.

Creating begets creating. We make things and call them good, even when they aren’t. And then we make some more.

But it is not good for an artist to be alone.

According to Rachel, “[S]eeing what poured out of [China] just made me feel like I wanted to run and see what poured out of me. I couldn’t wait to pick up a pencil and paper to see what came out. There was an atmosphere of appreciation for whatever might be revealed from anyone in the room with gifts that they have to sing or write poetry or to share intimate stories or draw.”

Community has invigorated my artistic life many times over: The middle-school play in which my ability to make people laugh triumphed over my dismal social status. The youth orchestra that taught me to count it a privilege, not an affliction, to play among a massive wave of second violins. Open mics consisting of a half-dozen poets reading just to one another—and never wanting it to stop. Conferences of laughter, encouragement, and book ideas. Retreats of scrawling raw, bewildered lines in the warmth and silence of friends.

Rachel went on to explain that events like that house concert create “a place where even if what someone is sharing isn’t profound to one person, it might be to someone else. So therefore there is acceptance, support, exploration and freedom from judgment.”

Her drawing, it turned out, had a clear destination. A colleague of hers recently found herself pregnant, alone, and for the first time in years, reaching for the sweep of God’s shadow. Rachel framed the drawing and offered it to her friend as an act of encouragement.

The contemporary church, especially the brand of evangelicalism I’ve associated with for years, tends to emphasize “vision casting,” clearly articulated goals and practical ministry. There is nothing wrong with this approach. A community without direction cannot reach, feed, or counsel people. It cannot offer them the security they need.

But we must also make space for the unpredictable, sometimes risky and inconvenient, life-saving moments of art. For the passionate paintings, odd dances, and weeping monologues that unsettle. For unorthodox, eyebrow-raising poems. For the concert that can’t fit neatly in a “Christian” box but floods a small, suburban home with faith. For the child who will grow up with a drawing of a nesting hen on her bedroom wall, knowing that it has always been there.

October 6, 2015
Tale of the Lucky and the Star-Crossed
Next Post

October 8, 2015 Brush With a Famous Writer
Recent Comments
0 | Leave a Comment
Browse Our Archives
get the latest from
Catholic
Sign up for our newsletter
POPULAR AT PATHEOS Catholic
1