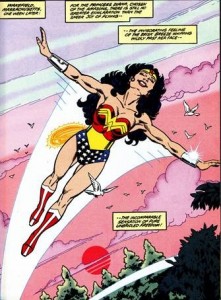 It’s one of my favorite images of Diana of Themyscira, a.k.a. Wonder Woman: her proud, bold body fills the page as she soars across a pink sunset, arms spread wide like a diver, her legs not straight but slightly askew as if skipping on the air.

As someone who never had much use for comics, I’m still a little surprised that I even have a favorite image of Wonder Woman, or that I prefer to call her Diana. Now she intrigues me for many reasons, but it was this image that helped me to “get” her and, indeed, to fall in love with her character.

I’ve read probably a hundred comic book titles in the six years since I really started to get into them—and I mean full-on novels running several hundred pages as well as the volumes that collect five to eight issues of a series—but I still tend to think of them as lighter fare, the medium I looked to for mental stimulation those early nights of parenthood when my newborn needed rocking, the medium I still prefer when my children, now six and three, are playing by themselves but I’m not confident I’ll be able to focus for long.

Yet for all their blatant dialogue and over-the-top action, I find that the good comics really do reach beyond entertainment status to become serious, thoughtful stories about morality, justice, and even the violence so central to many of them. And like any good story, the best comics develop these themes through the tools of their medium and not merely through a few key lines of dialogue. That’s what this image from George Pérez’s 1980s reboot of Wonder Woman does for me.

In this full-page panel, I see more than just an idealization; I see a character both human and icon—and certainly not, by the way, just a “female Superman” (best not to make that mistake).

She stands out against the world in all her glory: lean, strong, dynamic, her absurdly American costume toned-down by her wide golden belt and the hip white stripes on her go-go boots. Her power bands catch the setting sun and make her sparkle even as her golden lasso burns with Hephaestus’s fire. She is the powerful, perfect woman come to save us from our monsters.

This is Diana as symbol of hope.

But we see her otherness, too—a young woman whose powers set her apart and remind us that she comes from a different world. On her home island of Themyscira they have incredible technologies, but they practice ancient virtues—imagine a cross between an idealized ancient Greece and a 1950s sci-fi B-movie utopia (it’s also called, more blatantly, Paradise Island).

It’s an attractive home, where training as a warrior means expressing the virtues of the body in subjection to the will rather than becoming a weapon that needs to be used. Peace consists in cooperation in the name of mutual good rather than the anxious protection and expansion of power. She represents a world both nostalgic and aspirational.

In Pérez’s series, Diana leaves Themyscira for “Man’s (or Patriarch’s) World” as an ambassador of the feminine virtues of cooperation, compassion, and unity (represented by the Greek goddesses—plus Hermes and sometimes Apollo) over and against the masculine virtues of aggression and power (Ares, Hades, Zeus, or demigods like the Gorgons, Phobos and Deimos).

A kind of “anthropologist on Mars” character, she is often confused or surprised by how suspicious, vicious, and petty people can be in Man’s World. The violence women do to one another particularly baffles her; she calls them all sisters and does not understand why they do not band together with her to resist their true foe: the logic and structures of patriarchy.

If Pérez’s politics sometimes become blatant, he gives the values themselves enough room that they overflow the particular historical moment. He allegorizes the Cold War as the machinations of Ares on both sidesof the conflict, conflict itself serving to empower him above the other gods regardless of the victor.

Pérez reframes the geopolitical ideological conflict as a global question of values and commitments: will we bow to the forces of strife or stand for the forces of peace? Superhero comics often present a cynical view of the world and tread a fine line between a redemptive hope and a Manichaean fatalism; by explicitly invoking the gods and a domain beyond the everyday, Pérez comes as close as I’ve seen to recognizing our fundamental orientation to worship and thus to raising the question of which god(s) we will serve.

This is Diana as otherworldly messenger, as angel, a reminder of a higher order of reality.

The simplicity of the allegory doesn’t really bother me; sometimes claiming complexity masks self-serving purposes, and if the greatest truths belong to everyone, they cannot be esoteric but must be simple enough for everyone to grasp on at least some level. For the same reason I believe in Diana’s naïveté; she stands for and behind a worldview that lacks the sexiness of an elaborate system.

Visually, Pérez presents this moral and diplomatic purpose in the freedom of flight. In context of the narrative, it is a breath, a respite before more speeches and more battles. To witness her flying is to recall that she is still a human being, the bearer of our transcendent hope but not identical to it. She has her own journey of facing down evil and becoming good.

In this picture, at least, she’s winning; her goodness shines in her smile and her wide, vulnerable pose. It’s a private moment, but our presence is not lurid because her confidence and trust are like an invitation.

It’s as if her virtue lifts her into the air, beckoning us to become good, too.

Brad Fruhauff is a film buff, comics nerd, literature scholar, editor, and writer living in Evanston, IL. He is Senior Editor at Relief: A Christian Literary Review and a Writing and Communications Specialist at Trinity International University where he also serves as Contributing Editor for Sapientia. He has published poems, essays, and reviews in Books & Culture, catapult, Christianity and Literature, Englewood Review of Books, Every Day Poems, Not Yet Christmas: An Advent Reader, Rock & Sling, and in the newly released How to Write a Poem.

September 30, 2015
Beauty Will Save the Seventh Grade
Next Post

October 2, 2015 Wonder Woman, Flying, Part 2: Beauty and Sacrament
Recent Comments
0 | Leave a Comment
Browse Our Archives
get the latest from
Catholic
Sign up for our newsletter
POPULAR AT PATHEOS Catholic
1