How to Win the War on Christmas 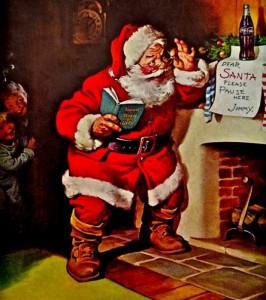 After thirteen years of parenting, my husband and I still know virtually nothing about raising children. But one thing we’ve always agreed on, since even before the first one was conceived, is not including Santa in our Christmas celebrations.

Now don’t get me wrong. We’re not one of those families. I don’t homeschool in a jumpsuit and make my kids play with Old Testament action figures. In fact, for evangelicals, we’re pretty theologically and culturally liberal. And we don’t hate holidays. Our kids dress up for Halloween and make each other Valentines. Christmas sees the usual tree, presents, and lights. We just don’t invite the guy in the red suit down our chimney (or through the heating vent or DSL box, I guess, since we don’t have a fireplace).

I mentioned those people, didn’t I? Those. The ones I don’t want you to associate with me because I want you to keep on reading. And to like me. Even if I didn’t mention, um, them, I would have worried about it, worried you would have placed me in that category of lesser, unenlightened, believers.

Or perhaps you felt judged by my comments about Santa, the creepily omnipresent, omniscient stand-in for God who judges us on our works. And visits only the families with discretionary income.

You’re not alone. When people find out we don’t observe Santa, they feel sorry for our children, like we’ve stolen the magic from their lives. My daughter’s kindergarten teacher actually called me to challenge my choice. I was damaging Lydia’s place in the society of children, stunting her ability to develop a sense of wonder.

The same child who drew bouquets of heads growing in gardens, who mixed chemicals in safety goggles and a Princess Jasmine outfit.

Often people immediately start defending their Santa-nic choice, even when I haven’t said anything more than, “We don’t do Santa.” It’s like when I say I’m a vegetarian and someone jumps in to tell me she eats meat “just once a week.” Carry on, please. My life choices aren’t intended to indict yours.

But with this essay, of course, I am defending my choice. A little. I’ve wanted to write about Santa, or the absence of him, for quite some time. But I’ve been scared.

We’ve heard much about the so-called War on Christmas: Starbucks criticized for simplifying its holiday cups, underpaid Wal-Mart workers demonized for mumbling “Happy Holidays,” city halls condemned for banning nativity scenes out front. It gets self-righteously ugly and obsessive and meme-ified—real quick. It can make me wish it were January already.

But can we really declare war on the Incarnation? It happened and continues to happen. God With Us, Alpha and Omega. Jesus is just fine, totally all good, with whatever hideous inflatable Minion you put on your lawn or whatever ultra-sacred midnight candlelit service you attend. He’s God in the flesh, who came out of Mary, lived, died, and came back. And not to spoil your Bible-reading plan, but he comes back again, somehow, someday, and wins. Hands down. Wins the whole damn thing.

God slept with some dirty asses in a stable to save us from ourselves. That’s it.

The reality is—and I know this—Santa probably doesn’t draw children away from Jesus. I mean, the whole “just kidding—Santa doesn’t really exist after all these years, but God does” bothers my husband and me. But I don’t think anyone’s faith has actually died on the Santa hill. I was a Santa survivor. For what I know, he may be spiritually important to some. The real St. Nick, at least—not the mall Santa—is a model of generosity and faith.

In the end, though, it’s not worth fighting about. I have no regrets about skipping it. I don’t want to add “make adorable reindeer snacks” to my Christmas Eve checklist, and I’d rather sleep than tiptoe around in the middle of the night. Our kids, who voluntarily tell us they don’t feel like they’re missing out, rip open their gifts like all the other red-blooded American children. We just make sure we give them the pep talk every year: “It’s not your job to tell other kids there’s no Santa.”

As the lights slowly string themselves across the neighborhood, what I’ve been thinking about most is my friend who died a few weeks ago, whose family will observe their first Christmas without him. How in the end, in those dazed days before death he may have remembered the smell of gingerbread, the spinning wheel of his first bike, or the feel of his children’s flannel pajamas on Christmas Eve.

Maybe my friend remembered Santa. Or maybe nothing about any holiday at all. But we carry those images with us in some way or another, our senses livened by the memories of our rituals, however spiritual, mundane, shallow, or outrageous they may seem. And then they’re gone.

The war is not about Santa, decorations, or music. It’s about being human on this beautiful, broken earth teeming with all manner of yous, mes, and exasperating thems. It’s about signing a peace treaty with the Creator of the universe asleep on the hay and waking, every day, to that gift.

December 14, 2015
The Greater Evil: Proscription or Compulsion?
Next Post

December 16, 2015 For the Love of Hank Stuever, Part 1
Recent Comments
0 | Leave a Comment
""It doesn’t matter when you start the Sinatra Christmas playlist or put up your tree. ..."
C_Alan_Nault How to Win the War on ..."
"Yup."
Max Marvel Finding My Inner Calamity Jane
"I an confused by the use of "aural" here: "In The Gutenberg Galaxy, he explained ..."
William G II The Gutenberg Imagination
"My friend is looking for a Pepper Smith he served in the army with, was ..."
Christine Budnack The Love Song of Pepper Smith
Browse Our Archives
Follow Us!