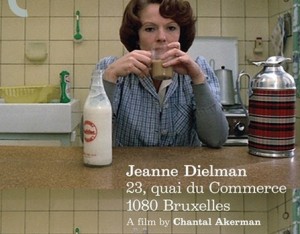 Somewhere in the middle of Jeanne Dielman, 23 quai du Commerce, 1080 Bruxelles, the eponymous Jeanne eats a sandwich in her kitchen. We have, by that point in the film, seen quite a lot of Jeanne’s kitchen. We’ve watched Ms. Dielman cook in that kitchen, peel potatoes, wash dishes (shot from behind her back so we can’t really see what she is doing), dry forks and knives, and polish her son’s shoes.

By the second hour of the film (just under four hours long in total), Jeanne Dielman’s kitchen has become an intimate space for us. Within this intimate space, we watch a woman eat a sandwich. The most remarkable thing about the scene, to me, is that we see her eat the entire sandwich.

In a normal film, we’d see a bite or two. The director would give us ten or fifteen seconds, at most, of sandwich eating. Then the director would cut the scene. There’s no point in showing the consumption of the entire sandwich. Viewers are going to be able, presumably, to understand that a sandwich has been eaten without seeing the proof in real time.

But Chantal Akerman, the director of Jeanne Dielman, does not cut the film after ten or fifteen seconds. She holds the camera steady and we watch Jeanne Dielman eat until she’s done. The eating is neither fast nor slow. It happens at more or less normal sandwich-eating pace.

It is not what we expect in a film, to watch a person eat an entire sandwich. It should be further mentioned that there is no great plot point around which the sandwich revolves. The movie contains a scene of Jeanne Dielman eating a sandwich (actually, two scenes of sandwich eating) for no other reason than that the sandwich consumption was one thing that happened in the kitchen that day.

So, why did Chantal Akerman film, twice, a woman in her kitchen eating an entire sandwich? The usual answer is that Chantal Akerman wanted to film the episodes of daily life to which we pay little attention. She wanted to bring the hidden and unappreciated things of a normal woman’s life onto the screen.

This is, no doubt, the truth. Akerman shows us the daily domestic routines of a woman living in Brussels in the 1970s to honor the work this woman does every day, and therefore to honor all such work that women do and have done. Jeanne Dielman, 23 quai du Commerce, 1080 Bruxelles is, therefore, a feminist film.

There is also an element of critique. In honoring Jeanne’s work, in showing us her domestic routine in all its detail, we also come to understand how stifling it is. It is difficult to watch Jeanne Dielman moving about her apartment from task to task without words like “repression,” “oppression,” and “suppression” coming to mind.

By the third hour of Jeanne Dielman, we’re quite prepared for something to happen, for Jeanne to get some release from the monotony and the routine. At the end of the movie, Jeanne’s life of mostly quiet domesticity does begin to unravel—and then comes apart completely when she does something horrible.

The very last scene of the film shows Jeanne sitting at her dining room table, fully aware of the dreadful thing she has done, but strangely calm, nonetheless. Order and routine have been—must be—restored, for the sake of Jeanne Dielman’s mind. And so we ask, “Was Jeanne seeking freedom from her domestic oppression or not?”

Jeanne Dielman is a film as much about ritual, memory, and trauma as it is about women, politics, and domesticity. In interviews, Chantal Akerman has talked about growing up surrounded by women. These were the older members of her family, her mother and aunts.

These women moved to Belgium after the Second World War. They came from Poland. They were Jews. In the case of Akerman’s own mother, the route from Poland to Belgium was by way of Auschwitz.

That’s to say, the women Chantal Akerman grew up with weren’t comfortable middle-class housewives stuck in the daily routine. They were refugees who’d just barely escaped a cataclysm with their lives. They were women who’d seen their entire form of life completely and violently obliterated.

One of the most painful things about Jeanne Dielman is not only watching Jeanne being oppressed by her womanly role, but watching her so desperately cling to the lifeless repetitions of that role. Ruthlessly, she seems to use her daily routine as a way to crush any real emotion or human interaction. She seems to need and want the ritual and routine of washing dishes, cooking potatoes only on Tuesdays, polishing her son’s shoes every morning.

We find out in the movie, indirectly, that Jeanne’s husband died some time before. I think this death stands in for the unnamable trauma that Chantal Akerman’s real-life female relatives experienced. Through war, murder, and destruction, the rituals of normal daily life were destroyed for so many Europeans who made it through WWII.

The task, for these people, was to stitch practices of daily life back together from the tattered remains of a once-coherent existence. What many of them got was a kind of empty shell. Routine for the sake of routine. Daily rituals that no longer had any purpose other than as a means of getting to the next day in order to do them again.

Akerman’s mother and aunts experienced the empty, hollowed-out nature of daily experience more radically than most people. That’s because their old ways of life were stripped from them so violently. But we all experience a version of the same problem. We enact the daily rituals of modern life painfully aware, deep down, that something has gone wrong, some link been severed.

Chantal Akerman died on October 5th of this year. Newspapers have called the death a suicide, though the details of her death are still somewhat unclear. She was said to be suffering depression. She had recently completed a film that documented a series of conversations with her mother just before her mother’s death.

Jeanne Dielman, 23 quai du Commerce, 1080 Bruxelles, it ought to be said, is one of the most quietly powerful films ever made.

Morgan Meis is a contributor to Page Turner at The New Yorker. He has a PhD in Philosophy and has written for The Smart Set, n+1, The Believer, Harper’s Magazine, and The Virginia Quarterly Review. He won the Whiting Award in 2013. Morgan is also an editor at 3 Quarks Daily, and a winner of a Creative Capital | Warhol Foundation Arts Writers grant. A book of Morgan’s selected essays can be found here. He can be reached at morganmeis@gmail.com. 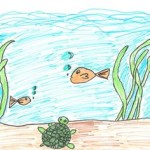 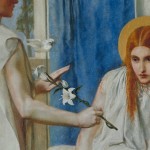 December 25, 2015 Snow on Snow
Recent Comments
0 | Leave a Comment
""It doesn’t matter when you start the Sinatra Christmas playlist or put up your tree. ..."
C_Alan_Nault How to Win the War on ..."
"Yup."
Max Marvel Finding My Inner Calamity Jane
"I an confused by the use of "aural" here: "In The Gutenberg Galaxy, he explained ..."
William G II The Gutenberg Imagination
"My friend is looking for a Pepper Smith he served in the army with, was ..."
Christine Budnack The Love Song of Pepper Smith
Browse Our Archives
Follow Us!