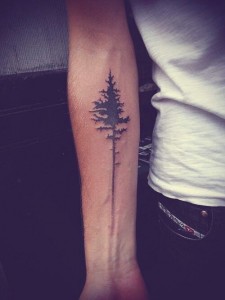 After my wife Katie and I decided to get matching tattoos, we spent months pinning designs and discussing placement, and—let’s be honest—fighting over pretty much every detail. It probably had been easier to choose our children’s names. We’re a stubborn and volatile couple, so there was no chance this would be a sweet story; it could only be a struggle of wills. We arrived, exhausted, at a conclusion, but somehow still grateful for one another, and when we finally got to the tattoo parlor, it could only have been anticlimactic.

Our artist, a large bald man named Bear with tattoos all over his arms, neck, and head, told us to walk around for twenty minutes or so while he made the stencils, giving us the opportunity to argue one last time about where to get marked. We had agreed on tree of life designs—mine more Celtic and hers more organic.

The tree invokes diverse mythologies, not least that of Genesis where it represents the source of eternal life in Christ. It also hearkens to an image of growing together from the sermon Katie’s grandfather gave at our wedding. We’d get the design on our inner forearms—my left, her right—so that they’d sort of knot up whenever we held hands, ‘cause we’re sweet like that.

Agreeing to get a tattoo in the first place had been something of a process for me, and it brought me in touch with the conflictual relationship between my theology of the body and my actual emotions about my body and my wife’s. When we actually pulled the trigger, we both learned something about ourselves. She learned she was not nearly so casual as she had thought herself: She reneged on the forearm placement and opted for her back. I learned, to my own surprise, that I existed in space and time.

Maybe that’s dramatic, but that’s how it felt. When I woke up the next morning with a large, black, knotted tree on my arm, I felt a different relationship to the world than I had the previous day, what I knew was embodiment.

David Bentley Hart describes existence in grand terms as “a pure gift…wavering from nothingness into the openness of God’s self-outpouring infinity, persisting in a condition of absolute fragility and fortuity, impossible in itself, and so actual beyond itself.”

It’s important to Hart that Christian theology affirms the fundamental goodness of creation against most other worldviews that believe life is vexed with doing violence in word and deed. Living, for such belief, becomes a self-aggrandizing heroism rather than a humble celebration of and living for the good Creator. The religious legalism I imbibed as a child committed the same error and gave me psychological blocks to certain forms of body modification.

Legalism also combined with my reserved temperament to create a distance between me and my own life that I’ve often blamed when I’ve felt the paucity of my imagination. As a child I imagined my life in my thirties as some idyll involving a blond wife and sun shining on a breakfast nook. Now that I’m in my thirties I realize most people imagine their futures married to a brunette and renting a nook-less apartment. Yet, I’m still imagining that same nowhere-future I did as a child—not as something I desire so much as what part of me believes I’d have if I’d done life “right.”

It’s silly, really, and perhaps a bit sad. I’ve known enough of the sorts of things that ought to connect me to finitude. We’ve had two kids, I’ve had chronic back pain for years, we’ve tasted stunning wines and melt-in-your-mouth fish and chips, and I’ve mourned at two funerals in the last four months. Yet, none of these things has broken me from that age-old sense of being some kind of space holder for some other existence.

If Hart provides a better theology of life, Gerard Manley Hopkins demonstrates the Christian discipline of attention to the world. His love of particularity helps me feel something of what it must be like to be attuned to the world. When he declares:

Each mortal thing does one thing and the same:
Deals out that being indoors each one dwells;
Selves – goes itself, myself it speaks and spells,
Crying What I do is me: for that I came.”

It’s a reminder to me to listen to the world—not to some moral I try to wrest from it but to the way it selves, resonates in its being in harmony with a divine music. The harmony plays in the chaos and the chaos does not overcome it.

Getting the tattoo, allowing my body to be so pierced and stained helped me hear that harmony by making me feel time and fragility as a function of will and bodily permanence. And in this sense of my embodied self I felt, too, more compassion for others, a general feeling of common humanity. Maybe it made me more sensitive to my wife and children; maybe it made it easier to cry at movies; I’m not entirely sure.

Strangely, too, the effect has already begun to fade, despite the ever-present reminder on my arm, such that I’m torn between the surprising feelings of wanting, on the one hand, to maybe get another one to feel it again, and on the other hand, to re-experience some of the very same anxieties from the first time around.

But seeking such stimulation is not really the trick. The trick, as Hopkins shows us, is to learn to see how “Christ plays in ten thousand places,” how the grace of being shines in every moment and wraps us in the presence of God in the present, in the world. In the flesh.

February 10, 2016 The Beautiful Miracle of Our Fragility
Recent Comments
0 | Leave a Comment
""It doesn’t matter when you start the Sinatra Christmas playlist or put up your tree. ..."
C_Alan_Nault How to Win the War on ..."
"Yup."
Max Marvel Finding My Inner Calamity Jane
"I an confused by the use of "aural" here: "In The Gutenberg Galaxy, he explained ..."
William G II The Gutenberg Imagination
"My friend is looking for a Pepper Smith he served in the army with, was ..."
Christine Budnack The Love Song of Pepper Smith
Browse Our Archives
get the latest from
Catholic
Sign up for our newsletter
POPULAR AT PATHEOS Catholic
1