The Coen Brothers, Plato, and the Imagination

The Coen Brothers, Plato, and the Imagination February 15, 2016 Guest Contributor 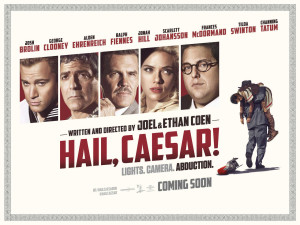 Hail, Caesar!, the Coen Brothers’ latest offering, tells the story of a pious hero on a religious quest, and by all appearances is a movie that asks to be interpreted in a theological way. A quasi-parable set in a big studio during the Golden Era of Hollywood, the film is bookended by two sessions in a confessional, where the protagonist, a powerful Hollywood executive named Eddie Mannix (Josh Brolin), confesses a few, mostly venial sins.

Mannix is on a mission to complete and promote a big Biblical epic (“the prestige picture…of the year”) about a Roman Centurion’s encounter with Christ and eventual conversion to Christianity.

National Review film critic Ross Douthat was quick to seize upon the movie’s theological themes. “In the context of the movie itself, the studio system is … the Church Visible, The Body of Christ,” he tweeted. “It’s a motley corporate entity, shepherded by a suffering Christ figure [Mannix], in which sins are forgiven and people are guided into roles.”

But while the studio in Hail, Caesar! may be a hospital for sinners, it also never ceases to be a factory of images. While a theological interpretation works on many levels, it also misses a big part of the story. Hail, Caesar! is ambiguous about the power of the movie studio, Mannix’s role in it, and the nature of the movies themselves.

As much as it is a theological drama, Hail, Caesar! is about the Janus-faced, sometimes good, sometimes evil, nature of the imagination—that is, of Hollywood movies, and art in general. This theme has a way of simultaneously subverting and enlivening the religious elements in the movie.

The theological reading is certainly illuminating. Based on a historical figure, Mannix is a “fixer”—someone who manages the public image of powerful figures (in his case, movie stars). As a fixer, he is in charge of making the stars’ problems go away, either by finding a solution for them or covering them up.

The analogy to the suffering Christ is straightforward: Christ, who wipes away our sins, who sets straight our path.

There’s also the “ecclesial” element in the movie: the studio, Capitol Pictures. The studio is indeed a hospital for sinners, and sinners not so much in the sense of people who do bad things, but of people who are lost.

Among the lost, there’s Baird Whitlock (George Clooney), arrogant and foolhardy; DeeAnna Moran (Scarlett Johansson), restless and looking for love; and Hobie Doyle (Alden Ehrenreich), naïve and, when he is given the lead in a high society period drama directed by a European auteur, in danger of destroying his career.

Mannix guides all of these figures towards a measure of stability and success. He finds a way to handle the public perception of Moran’s out-of-wedlock birth, and in the process, inadvertently finds her a husband (a Poindexter Surety agent played by Jonah Hill, the opposite of all the glamorous and dangerous men DeeAnna has previously dated or married).

He also sets up Doyle for an opportunity to grow in self-confidence by playing a part in saving Whitlock, who has been kidnapped. Whitlock himself—after his rescue—gets a lesson in humility from Mannix.

When we consider what Mannix actually accomplishes, though, a different picture emerges.

We’re never exactly sure that what Mannix does for his, er, flock, is actually efficacious. DeeAnna Moran elopes with her new love, but we never see the results of this impulsive decision. Baird Whitlock gets some sense slapped into him, but that’s probably going to last only through the completion of the Jesus movie. And Hobie Doyle is still quite naïve at the end of the film.

Perhaps most revealing is what Mannix tells Thora Thacker (Tilda Swinton), a Hollywood gossip columnist who threatens to expose a skeleton in Baird Whitlock’s closet: “People don’t want facts—they want to believe. That’s our great industry—mine, and yours too. They want to believe that Baird Whitlock is a great star, and a good man.”

All these factors get me thinking about Plato’s critique of the imagination in the Republic. The image is only a copy of a copy: An object in the world is a reflection of an ideal form, and an image merely the look of an object.

Art and poetry inevitably take human beings farther way from ideals—from real truth, beauty, and goodness—and instead distract us with games and pleasure. Mannix, as a manipulator of public image, a manager of a factory of images, is perhaps merely toying with public perception, and making money doing so, rather than guiding his movie stars toward a better life.

Or, even if his intentions are good, could he square them with those of his frivolous and greedy superiors, who think nothing of making a cowboy-actor play the lead in a European period drama?

The ambiguity of Mannix’s role might also have something to do with the film’s nod toward the leftist intellectual tradition embodied in the Frankfurt School—Herbert Marcuse is a character in the film (he’s part of a cabal of Marxist writers who kidnap Baird Whitlock).

Modern liberalism has given us “comfortable, smooth, reasonable, democratic unfreedom” (Marcuse, The One Dimensional Man), which has made an industry out of culture, which gives human beings the illusion of spiritual peace, while lulling them into political docility.

Perhaps Marcuse’s name is meant to get us thinking about the film studio as a component of the culture industry.

Yet the imagination is two-faced. Whatever Mannix (whose faith is depicted as eminently genuine) may say about belief and truth and the movie business, he also believes that the movies can serve, even enhance, the truth. As he tells a group of religious leaders assembled together to discuss the Jesus movie: “The Bible of course is terrific. But for millions of people, the pictures will be their reference point for the story—the story’s embodiment.”

Moreover, Mannix’s Jesus movie concerns an arrogant imperial general who, in spite of himself, is turned humble by the gaze of Christ.

Hail, Caesar! is, perhaps, a movie about how the film industry—a jewel of the postwar American Empire—and the imagination itself, can be, in spite of themselves, communicators of truth and beauty.

February 16, 2016 Your Ideal Church
Recent Comments
0 | Leave a Comment
Browse Our Archives
get the latest from
Catholic
Sign up for our newsletter
POPULAR AT PATHEOS Catholic
1