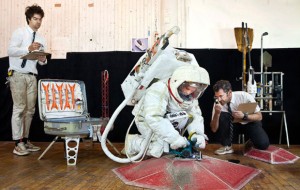 The tenth item on a list entitled “How to Watch This Film,” which accompanies Tom Sachs’ A Space Program, says that the film is “a love letter to the analog era.”

That obsession with all things handmade and non-digital was obvious as I watched the film—even though I was sitting on my couch, streaming a digital screener on my iPhone and beaming it over WiFi to my Apple TV, which is about the least analog thing a person can do.

But Sachs loves this stuff. He’s a sculptor, sort of—playing with all kinds of things from the natural and human-made world to form whimsical new objects, like boomboxes and in this case, fake planets and massive mission control centers and even the credits roll for the film, which looks like it’s rolling by on taped-together black construction paper.

The movie (“NOT A DOCUMENTARY,” the instructions insist, “it’s an INDUSTRIAL film like the safety videos they make you watch in high school shop class so you don’t cut your fingers off”) is a window onto a large-scale art installation Sachs and his studio team mounted in 2012 at New York City’s Park Avenue Armory. Five years earlier, a smaller version of the project had been mounted at the Gagosian Gallery, in which the team “went to the moon”—so this expedition was titled Space Program 2.0: MARS.

The installation took over the Armory’s 55,000 square foot Wade Thompson Drill Hall and ran for four weeks, and in an eleven-hour production, the team mounted a journey to and from Mars, while a crowd of observers watched. It’s a ton of fun to watch, recalling the hours and hours you spent as a kid in the backyard with your friends, using all the leftover paper towel tubes and cardboard boxes and craft supplies you could muster in service of imagination.

The only difference here is that the participants are grownups, with a budget and the ability to use a circular saw. The “journey” was documented by director Van Neistat (who has previously worked with Sachs on several shorts) and makes for a strange, experimental, enjoyable homage to both those instructional videos and to the ways that science, art, and religion all occupy a similar space.

The twelfth and final item on the “How to Watch This Film” list somewhat ominously suggests that “If you believe in God, you need to watch this movie.” I scratched my head a bit when I read that, but the first line of the film is a quotation from the visionary inventor Buckminster Fuller: “Science and religion are on a parallel course to answer one question: are we alone?”

In an interview after the film played at SXSW last year, Sachs elaborated a bit:

I did a residency at Jet Propulsion Laboratory in Pasadena, so a lot of the technical stuff I got to work on with the guys there… I thought I would get all this engineering information, but really, what I got was all the spiritual stuff, because these scientists are these deeply spiritual individuals. They’re answering the same questions that religion answers—are we alone? Where do we come from? They are very into the big questions and the difference between a rocket scientist and a rocket engineer is that scientists use these machines to answer the questions and the engineers are into the nuts and bolts of how to get it done, and they work together. I’m a little in between because there’s a real blue collar side to making sculpture. You get to weld and do carpentry or handle clay or whatever it is, but then if it’s going to have any resonance, you’ve got to be interested at least in the big questions. That’s why when you find artists who are involved in religious dogma in the modern age, their art is never good. Back in the time of Michelangelo is different, but even then, I think he sucked up to the church just to get the bills paid.

Those big questions haunt Space Program 2.0: MARS, which features, among other things, a mounting stress level between the two astronauts that breaks into a full-scale fight and necessitates an explanatory video about how explosions can be modulated by their reactions. The film makes a strong case that we’re not alone in the universe precisely because we have one another, and though it evokes a state of wonder at what might be out there, it keeps turning the focus back on the wonder of humans: “We go to Mars not to exploit the resources of a new planet but to better understand our resources here on Earth.”

Those resources are the building blocks of science, to be sure—and also of art, which characterizes Sachs’s own art. That he sees such a strong link between them is no wonder. The team calls themselves “bricoleurs,” people who engage in bricolage, the act of repairing or creating with available resources. Which is certainly what astronauts end up doing (as another movie about a trip to Mars taught us last year), and what artists do, too.

And in some sense, bricolage is the work of religion. Those religious questions—who are we? where did we come from? where are we going? what do we do while we’re here?—are answered with reference to our unique situations. Christianity takes as its authority the Bible, but recognizes that the text is also a bit of a work of bricolage, seeking to repair the broken places in human societies and human hearts with the metaphors and images available to those who penned it. So Christian worship has taken different forms and changed shape a bit depending on what broken place needed healing around the worshippers.

Near the end of the film, after the fight breaks out, the astronauts engage in a tea ceremony. Tea ceremonies have long been ways of extending hospitality and peace to another party. It’s a way of combatting narcissism, of sharing time and space and contemplation.

In the same interview, Sachs explains: “That’s the other great thing that the planet Earth has. If I could bring art to another planet, I wouldn’t bring a Barnett Newman painting. I would bring a tea ceremony because it’s so complex and encompasses all the stuff about religion that I like, as well as all the philosophy and hospitality and generosity and appreciation for Earth.” Not a bad discovery, for a handmade trip to outer space.

A Space Program opened at Metrograph in New York City on March 18 before expanding to a limited number of engagements around the United States.

March 22, 2016 Refugees Are People, Not a Crisis
Recent Comments
0 | Leave a Comment
""It doesn’t matter when you start the Sinatra Christmas playlist or put up your tree. ..."
C_Alan_Nault How to Win the War on ..."
"Yup."
Max Marvel Finding My Inner Calamity Jane
"I an confused by the use of "aural" here: "In The Gutenberg Galaxy, he explained ..."
William G II The Gutenberg Imagination
"My friend is looking for a Pepper Smith he served in the army with, was ..."
Christine Budnack The Love Song of Pepper Smith
Browse Our Archives
get the latest from
Catholic
Sign up for our newsletter
POPULAR AT PATHEOS Catholic
1