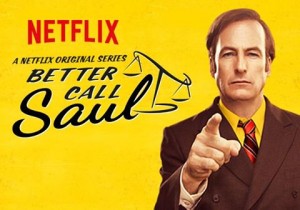 Better Call Saul, a prequel to AMC’s milestone series, Breaking Bad, further establishes co-creators Vince Gilligan and Peter Gould to be among the most intricate moral thinkers working in the dramatic arts. Whereas the first series rendered the ethical decline of a dying man who makes something of a noble bargain with his conscience—attempting to provide for his struggling family by entering the methamphetamine trade—the second series focuses on an altogether different landscape of principles.

Instead of depicting the inch-by-inch, then mile-by-mile, depravity that follows a dubious but not wholly dishonorable decision, Better Call Saul illustrates the confluence of causes that can make a man see himself in a certain way. If Breaking Bad’s Walter White is “Mr. Chips turned Scarface,” as Gilligan described him, Better Call Saul’s Jimmy McGill/Saul Goodman is Willie Stark turned strip-mall consigliere.

The series, now beginning its second season, is set in 2002, some six years before the action of Breaking Bad. As such, it gives the backstory on how Walter White’s outlandish shyster lawyer, Saul Goodman, becomes the man that he is. Goodman is the epitome of the ambulance-chasing, tasteless advertising (“Better Call Saul”) attorney, complete with a debased clientele and a shameless talent for truth perversion.

But it was not always thus; at least it was not always completely thus. And that is the brilliance of the Gilligan-Gould conception of the character. How Irish good-timer Jimmy McGill from Chicago becomes faux-Jew Saul Goodman in Albuquerque is a study in how a man is both the makings of himself and the product of what others have made him.

From the series’ outset, Jimmy McGill, played masterfully by Bob Odenkirk, is one of those people that you can’t help but like, even if you know you shouldn’t. He’s a troublemaker and a fun-lover to a pitiful degree, the kind of black sheep in a family that despite all of the trouble he causes, holds first place in everyone’s heart. But the lovable side of the man is complicated by a penchant he has for running scams.

Back in Chicago, he and his sidekick Marco are confidence men, and as good as they come. “Slippin’ Jimmy” is a scheme that they use to fake accidents in order to exploit payment, the proceeds of which they blow on wine, women, and song. Of course, at some point the hijinks of scofflaws always become serious trouble, and Jimmy ultimately finds himself in jail.

To the rescue comes his good-guy brother, Chuck, played by Michael McKean. Chuck is everything Jimmy is not—a responsible adult who’s made a big name for himself as an attorney out west. The prodigal Jimmy, bailed out and packed up, moves with Chuck to New Mexico, where he starts a new life working in the mailroom of Chuck’s prestigious law firm.

Jimmy is not only resolved to make a new life, but is also a man with an intellect, one that’s every bit as keen as Chuck’s. He may have used his smarts in distasteful ways and underhanded tricks, but once he sets his mind to it, his penetrating insightfulness and infectious energy get results. Then, unbeknownst to Chuck, Jimmy obtains a correspondence law degree from American Samoa. Everyone is overjoyed.

But Chuck knows the other side to Jimmy. As his brother, he’s experienced a long history of embarrassing behavior and cringe-worthy acts. While everybody loves charming scalawags, only their families have to clean up after them, and the cost and ugliness of the job is not quite so endearing. Jimmy sees himself as a man new-made, someone who’s sloughed off his past by means of a go-West mentality, a plane ticket, and a mail order degree; he looks in the mirror and sees something new and future-directed.

Chuck, on the other hand, sees both the new and the old, and fears what the past means for the future. When Jimmy starts his law practice, everything that he is—the cunning-minded genius and the corruption-prone con—converges. You see the compassionate, good soul of a man who takes care of his brother (Chuck develops a neurosis that makes him hypersensitive to electromagnetic fields, imprisoning him inside his house), and also the swindler who is so good at what he does that you fall for his tricks every time; blink, and your wallet is missing.

What unfolds in the episodes that follow is an involved portrait of a man who needs others to believe in him, who asks for a fresh chance, and also a man who is unworthy of belief and who squanders the chances given him. The question of what made Jimmy become Saul is not a simple one, and whether or not Saul can become Jimmy again—indeed, can become the Jimmy that Jimmy wanted to be when he came west—is yet to be seen. It’s worth watching to find out.

March 24, 2016 I Am a Digital Man
Recent Comments
0 | Leave a Comment
""It doesn’t matter when you start the Sinatra Christmas playlist or put up your tree. ..."
C_Alan_Nault How to Win the War on ..."
"Yup."
Max Marvel Finding My Inner Calamity Jane
"I an confused by the use of "aural" here: "In The Gutenberg Galaxy, he explained ..."
William G II The Gutenberg Imagination
"My friend is looking for a Pepper Smith he served in the army with, was ..."
Christine Budnack The Love Song of Pepper Smith
Browse Our Archives
get the latest from
Catholic
Sign up for our newsletter
POPULAR AT PATHEOS Catholic
1