What Happened to Fun? 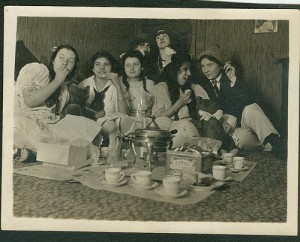 I was so good, and for such a long time, two weeks at least of decent work and adherence to my schedule. Two weeks of self control, discipline, and a rule—twenty minutes of prayer, ten of spiritual reading, thirty of new writing, one to two hours of old writing and editing, fifteen of cleaning and picking up, with the rest of the afternoon devoted to planning and executing dinner.

Evenings are entirely for the children from two-thirty to ten. Exercise after the kids are in bed, go to sleep at a reasonable hour (sometime before midnight), and I felt so satisfied, was coming to such a place of peace with my life and what I’m doing with it.

And then I took a day off, if you could call it that. It was a Saturday. I refused laundry and dishes and meaningful work, because I was spending time with the kids, see, going to soccer games and helping them visit their friends, and otherwise resting and waiting and falling deeper and deeper into a pit of unquenchable longing.

This happens sometimes. I can almost predict it—though I never bother to try—when I have been unbalanced in my affairs, often, ironically, while attempting to live a life of balance. Evil can only fill a void, the spiritual teachers say. There’s no time for misbehaving when I’m living a full life, but there’s also no time for fun, and I miss play.

By play I mean something primal and social, but not exactly childish. It’s a matter of improvisation in the company of like-minded people, inhibition set aside, a bit more physical than ordinary conversation, with a hint of practical joke or slapstick, and it involves guttural laughter.

I haven’t laughed at anything as an adult the way I did when I was twelve. There is no hilarity quite like middle school hilarity, balanced as we were in a state of in-between-ness. Every element of life held the intrigue of adulthood paired with the rather poor discernment of childhood, so everything was funny. Laughing jags were contagious and painful, lasting for ridiculous amounts of time.

I tell my kids now that they’re not allowed to go on overnights with their friends because nothing good ever happens after midnight, which is true. But my goodness, middle school slumber parties were fun.

At Kristy’s we did dance routines in front of the big mirror in the living room. At Gina’s we swam, sat in the hot tub, and overate. We once had a wrestling tournament and a movie marathon, and we always had objects hanging around that took on heightened and traditional significance—like the blown glass elephant at Amy’s that became our fart detector and had to come to every slumber party thereafter in order to indict potential gassers.

So much of our ability to play, it seemed, was made possible by having strong authority figures—the parents in the next room, teachers on duty, and the feeling of getting away with something. In order to really cut loose, to really be free, we needed to know there were boundaries in place to protect us. We might cross them, but the boundaries signaled the way back.

My grade school friends and I still get together once every two or three months, starting around seven, ending around eleven. When we first found each other again after our wayward early twenties, we drank wine in order to reach hilarity as quickly as possible because time was short. Still fun, but not how it was when we were kids and had lifetimes to experience group boredom, and ultimately, group creativity.

I sometimes wonder if we have all been through too much, have crossed too many boundaries in our lives to laugh like we once did. It has been one of the pivotal acts of becoming an adult, to seek, love, and be responsible for maintaining the walls of our own playgrounds, setting boundaries that can allow us, once again, to be free.

So many of us were stricken by spiritual and occasionally, physical sicknesses during our times of transgression, the various antibodies of which remain in our blood and make us rest-seekers long after we’ve each discovered the way to healing.

Very recently, we have begun to pray with and for each other. We now sit in chairs with our feet on a shared recliner, pull blankets over our laps, and talk about the different miracles we ask of God for our families, and of course, the more the Holy Spirit enters our friendship, the less we rely on the wine for joy.

Last week, at a memorial service for a mutual friend’s spouse, I sat holding hands with one of my dearest and oldest friends, now a sister in the blood of Jesus as well. We both received communion, something we’d never shared with each other before, and then we wept in our seats, until we each realized we were both crying, and then we laughed, soundlessly, heads bowed.

It may be that as we are drawn deeper and deeper into the body of Christ, play is replaced with something much finer, and more satisfying. Laughter to tears becomes tears to laughter, and we experience something that as a child always mystified me—Rejoicing.

March 17, 2016 Changing Positions: A Meditation for Campaign Season
Recent Comments
0 | Leave a Comment
""It doesn’t matter when you start the Sinatra Christmas playlist or put up your tree. ..."
C_Alan_Nault How to Win the War on ..."
"Yup."
Max Marvel Finding My Inner Calamity Jane
"I an confused by the use of "aural" here: "In The Gutenberg Galaxy, he explained ..."
William G II The Gutenberg Imagination
"My friend is looking for a Pepper Smith he served in the army with, was ..."
Christine Budnack The Love Song of Pepper Smith
Browse Our Archives
get the latest from
Catholic
Sign up for our newsletter
POPULAR AT PATHEOS Catholic
1