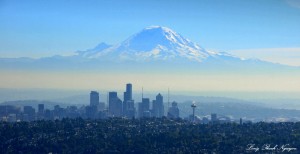 It was snowing / And it was going to snow. Which is it, Mr. Stevens, the actual weather or the forecast? You want it both ways?

It’s primary season in America. I don’t know who to fear more, Trump or his supporters.

All the chest-pounding, bullying, demonizing, dissembling, threats: they’re going to pay for it; I’d like to punch that protester in the face.

And the crowds cheer, how they cheer.

That’s me in the spotlight, losing my religion. Choosing my confession.

A long time in the spotlight.

Someone stands on a stage in a field, a hall, an arena and feeds a crowd what they hunger for.

Someone’s been too long at the fair. Eating data.

Once she’s a candidate, does she ever have time to listen to wind, trees in wind, flagpoles in wind, gulls in wind, tower-cranes in wind, sirens in wind, umbrellas in wind, rope in wind, wood in wind, water in wind?

Here we are, women and men and children who live with dreams and disappointments, small pleasures, modest and great accomplishments and failures, luxury and illness, beloved pets and white lies, little on our plates and excess, too much to finish in day, a lifetime. Here we are, waiting for a candidate to hear our stories.

I want to believe that something happens to a candidate who listens deeply to as many of our stories, stories in harmony and at odds, especially at odds with each other, as one person can. And not just in search of the one story he’ll share with others to say, I hear you; I’m here to help.

I want to believe a politician can grow a heart wider and deeper than the heart he was born with, the heart she has borne for decades. I want to believe that a narrow and hardened vision can be replaced with a vision of a nation moving toward tenderness.

When my son says Palestine, I register Republican. When my daughter says undocumented immigrant mother with ankle monitor in need of medical care, I register Humanitarian. On any given day, I’m a Democrat, a Socialist, an Anarchist, a Pacifist, a Militant, an Apologist, an Obstructionist, a Capitalist, a Collaborator, an Occupier, an Individualist, a Spiritualist, a Buddhist, a Secularist, a Post-Denominationalist, a Jew—all these in turn as I move from pharmacy with a stapled bag of pills in hand to classroom with a paragraph chosen for close review to locker room with bulging and sagging, frustration and pride, the exact weight of loss and gain.

When my daughter lived in Inwood, I was all Dyckman Street, all A train. Now that she’s moved, I walk with her and my grandson in the working-class woods at the end of her block, and I’m definitely pro life-outside-the-City.

The first six lines of Stanley Kunitz’s poem “The Layers”:

I have walked through many lives,
some of them my own,
and I am not who I was,
though some principle of being
abides, from which I struggle
not to stray.

How about this “principle of being”: I will listen, I will learn, I will grow today and grow until the end of my days?

Attention walks, walks away. Attention wanders and returns. It’s like a cat or a child of Christ or some married men.

Bringing the attention back, again and again. Changing a brain. The monks know how. The neuroscientists are learning now: neuroplasticity.

Thus is it written: a father of a nation is two men with one truth. Or is it one man with two truths?

Turn it and turn it, for everything is in it.

I don’t know whether to be sickened or heartbroken or both by the debate.

Later, after a metaphorical account of life’s journey so far, “The Layers” concludes:

In my darkest night,
when the moon was covered
and I roamed through wreckage,
a nimbus-clouded voice
directed me:
“Live in the layers,
not on the litter.”
Though I lack the art
to decipher it,
no doubt the next chapter
in my book of transformations
is already written.
I am not done with my changes.

Kunitz wrote “The Layers” in his sixties. He lived well beyond that age—to just shy of his 101st birthday.

Heart: hardened, and it’s going to harden. That, and an inflexible mind.

Hear me now, these are the words commanded this day: you shall love.

When love is confined to the stiff heart, it shall be released, not by politics, but by art.

March 18, 2016 Dancing on the Way to Prison
Recent Comments
0 | Leave a Comment
Browse Our Archives
get the latest from
Catholic
Sign up for our newsletter
POPULAR AT PATHEOS Catholic
1