A Strange Season for Inter-Christian Families 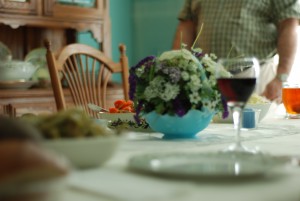 American culture, at this late and plural hour, seems to have pretty well normalized the notion of the interfaith family, to the extent that if your environs are urban and/or coastal, and your circles revolve around the ranks of top- and second-tier universities, then the multiple-faith union is almost a given, and certainly not a problem.

There’s now the cliché—which the Mark Zuckerberg biopic The Social Network made a joke about—of Jewish boys and Chinese (Baptist? Confucian?) girls. There’s another pattern, mostly in my experience in the Northeast, of Jewish young adults finding their bashert among a certain kind of generationally-sanded, now-affluent Irish Catholic (cf. Caroline Kennedy and Ed Schlossberg, to cite another generation).

Families that truly number two (or more) faiths have a kind of flexibility that can seem infinitely elastic: The Christmas tree gets rechristened into a “Chanukah bush”—with attendant blue-and-silver tinsel and a Star of David on top—a trope that comes in for annual December scorn among both my Jewish and Christian friends. (Except for those evangelicals of my acquaintance who avow a special relationship with the state of Israel.)

Sometimes these faith combinations make sense: It comes across as pretty nifty and convenient that both Chanukah and Divali focus on the kindling of dramatic nighttime flames. Sometimes they don’t: This year, Easter on the Gregorian (Western) calendar came a full month before Passover, which seems awfully meshuggah to me. But as I said, in contemporary America, we are pretty much rolling with it.

So I guess what I mean is that this is a strange season for inter-Christian families, instead. Or maybe I just mean my own family’s version of the dilemma, in which my husband is a believing Roman Catholic and I am an Eastern Orthodox convert. On the day I am writing, my husband’s Easter was yesterday, and my own Paschal celebration, and that of our two Orthodox children, still remains a full month away.

Even as we live in a culture that’s practically blurred over the concept of distinctions, there’s an uneasiness inherent in our “disparity of cult,” to use the prim Roman Catholic term for the marriage that we have. Each of us, from time to time, will lament the inability to stand before the Chalice together, and each of us is conscious that ours is not the Christian Ideal.

More than once, I’ve had old-country-type Greek or Serbian friends ask me incredulously why I didn’t “make him convert,” or even how a legitimate Orthodox priest countenanced our marriage in the first place. Answer: we were both baptized in the name of the Trinity.

Not that I could have imagined “making him convert” in the first place, and if you know anything about my husband, you know he would never do that anyway. Just like his own fierce Episcopal grandmother who refused to convert to Catholicism and therefore had to be married outside the altar rail. She remained an Episcopalian through the birth and raising of five Catholic children until she was widowed and reverted back to Canterbury permanently.

It’s just that these liminal places—like this year, when the Easters are farther apart in the calendar than they practically ever are—are difficult.  Mardi Gras was weeks this year before the Apokreatiko Glendi, the Greek carnival celebration before the beginning of the fifty-day meatless Fast.

Into which the Western celebration of Easter fell right in the middle.

Here poses a problem of practice: Do I risk voiding the meaning of Lenten observance if my Orthodox children and I snap out of it for a day to eat lamb and jellybeans, and raise our glasses in a toast on what my son’s Greek godmother refers to as “white-man’s Easter”?

I worry that the lesson that they will draw is that, in the end, none of these observances will seem all that worthy, or significant—and thus might just as well be abandoned. I’ve heard my own Jewish friends refer to the difficulty of maintaining the separation of milk and meat, in a culture where there are cheeseburgers on every corner. Though I have just as many Jewish friends who’ve found their own children suddenly snap into Halachic attention, and begin keeping kosher.

But you do not always have the Bridegroom with you, I think. However the calendars might differ, the center of both expressions of faith is found in the body of Christ. Yes, again, it is all about Jesus. Just gimme Jesus.

In our observances of Lent, then, we are like two athletes, both training, just on a slightly difference schedule or regimen, checking up on each other in the locker room along the way. Painstakingly, my husband has crafted vegan dinners of beans and rice, determined to keep us on the fast, even on those work-nights when I might head for KFC. I have kneeled in the pew at the adoration of the Blessed Sacrament at my husband’s parish, a block away from our house, and observed the Year of Mercy.

However imperfectly, we are running to win the prize—even though we know that in the end, it is all about grace.

That’s why I cannot imagine not celebrating the Resurrection as the year turns and it dawns into his life once more. We sing hymns in the church’s cool stone; the early spring forsythias blaze yellow. Nadia Bolz-Weber famously said that “nothing says ‘Christ is Risen’ like a chocolate fountain in the baptismal font,” but as far as I am concerned, nothing says “Christ is Risen” like Bloody Marys at the Yacht Club.

The Resurrection is deadly serious, and it is real.

He’s not yet risen for me, but I can take a sip of my Tabasco-spiced vodka and Clamato and see over the succession of meatless days the pink tinge of sunrise—and Pascha—on the horizon.

Image above is by Szapucki, licensed by Creative Commons.

April 12, 2016 Charles of the Desert
Recent Comments
0 | Leave a Comment
""It doesn’t matter when you start the Sinatra Christmas playlist or put up your tree. ..."
C_Alan_Nault How to Win the War on ..."
"Yup."
Max Marvel Finding My Inner Calamity Jane
"I an confused by the use of "aural" here: "In The Gutenberg Galaxy, he explained ..."
William G II The Gutenberg Imagination
"My friend is looking for a Pepper Smith he served in the army with, was ..."
Christine Budnack The Love Song of Pepper Smith
Browse Our Archives
get the latest from
Catholic
Sign up for our newsletter
POPULAR AT PATHEOS Catholic
1